Steady As He Goes: Raheem Sterling Has Arrived at Liverpool 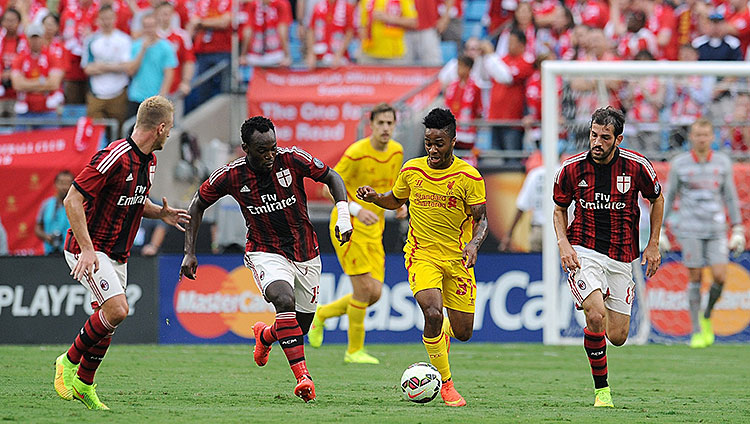 In his second full season on Liverpool’s first team, 19-year-old prodigy Raheem Sterling lit up the Premier League with nine goals and five assists. He was an integral part of Liverpool’s unexpected title challenge and eventual second-place finish. He helped the team score a club record 101 goals, partnering in an almost unstoppable attack with Luis Suárez and Daniel Sturridge.

You can get lost watching Sterling’s YouTube highlights from Liverpool’s 2013-14 season — so much so that it’s kind of remarkable to think that two summers ago, the most compelling Sterling clip was one of his manager dressing him down in front of his teammates.

Two years ago, I saw a much different Sterling. Liverpool manager Brendan Rodgers was training a makeshift squad in Boston. The core of Rodgers’s team was away, vacationing after the Euros, so Sterling had a chance to impress. He didn’t look out of place when playing with the likes of Suárez. Not all was perfect for the teenager, though. He still had plenty to learn.

One afternoon, Rodgers brought a group of younger players together on the field at Harvard Stadium and talked to them about being professionals. Sterling appeared to say something, and Rodgers pointed his finger at him and warned the winger that if he spoke back again he’d be sent back to Liverpool. It wasn’t the most out-of-the-ordinary occurrence, a manager chiding a rising star. Sterling was 17. But this particular exchange became a scene in a documentary (and a bit of a meme among Liverpool fans) and was aired as part of Being: Liverpool.

At the time, Rodgers was in his first season in charge of Liverpool. He was a young manager trying to revamp a club and help it find an identity. Sterling was a kid trying to push his way onto the first team. Things came to a boil, and it appeared as though the teenager’s chance to impress had passed. They worked out their differences off camera and Sterling eventually showed Rodgers he merited a spot on the first team. A few weeks later, Sterling rewarded the manager’s decision to give him his first start with a man-of-the-match performance in a 2-2 draw against Manchester City.

“For a 17-year-old playing against the champions, I thought his performance was fantastic,” Rodgers said after the game. “But he has a long way to go because you have got to be consistent and that is something I’ll have to keep a close eye on.”

This summer, it was Sterling who arrived late to preseason in Boston because of international duty. In two years, he’s gone from the kid being dressed down by his manager on a reality TV show to England’s next great hope (he was one of the bright spots for the Three Lions in Brazil). But he’s still young, and he knows there is more for him to learn.

“At that time, I came here trying to really prove myself to the manager and say I deserved a spot in the first team,” Sterling told me recently. “This time around, I’ve played a few more games and played in the national team. As I said, I’m still a young player and still trying to learn and show what I can do.”

Sterling is humble about what has happened to him over the last two years. He knows not much has changed since the last time Liverpool was in Boston.

“If you keep working hard, things will come your way,” he says. “And you just keep striving to be the best that you can be, and that’s something I am willing to do this season. You have to be a team player and strive forward.”

Sterling’s grown on and off the field. Gone are the tabloid headlines, and he looks to have settled into his role as a father. Despite all the pressure put on him by Liverpool and their supporters, he’s largely kept himself out of the papers — and out of trouble.

“The responsibilities that you carry playing for Liverpool are huge, and to have them on his shoulders as such a young man and to cope to them as he has done is a great credit to himself,” Rodgers said ahead of July’s preseason game between Liverpool and Roma at Fenway Park. “And obviously, as I’ve said, he has continued to flourish in an environment that is set up to develop players. So I’m sure he will continue to develop and improve.”

Sterling came into the preseason without missing a step. He scored two goals in three appearances and looked like one of Liverpool’s best players when he was on the field for wins against AC Milan, Manchester City, and Olympiacos.

It’s a rare occurrence for Liverpool to play their archrival, Manchester United, in a friendly, but the two sides took the field at Sun Life Stadium on Monday. Sterling didn’t disappoint, taking the opportunity to show he’s still growing, getting better with every game. He was Liverpool’s best player, drawing a penalty in the 13th minute and creating the possibility of another penalty in the 35th minute when he was taken down by Ander Herrera. Despite the scoreline — United won 3-1 thanks to three goals in the second half — all things point to Sterling continuing his progress and shining for Liverpool this season.

Kevin Koczwara (@kkoczwara) is a freelance journalist whose work has appeared on SBNation, the Boston Globe, and Howler.

Sorting Out the P.K. Subban Signing