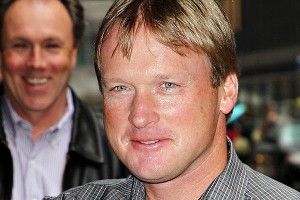 The other day, at some kind of social function, I broke out the phrase, “Looks like someone called a hot route,” when referring to someone doing something a little bit unexpected. All the people I was standing with looked at me, and it was clear they were all thinking the same thing: “Awesome use of football terminology in everyday life. This guy obviously pays close attention when he watches Gruden’s QB Camp.”

I do really pay close attention when I watch Gruden’s QB Camp. I find that the lingo comes in really handy and it generally improves the way people look at me at the office, at parties, just wherever I break it out. These are all phrases used in the most recent run of Gruden’s … episodes, featuring prospects such as Andrew Luck, Robert Griffin III, Brandon Weeden, and Brock Osweiler.

So let’s say you’re trying to make plans with, say, three people. You’re all going back and forth on e-mail about where to go for dinner and there’s the usual indecision, and then one of the people on the chain says, “Let’s loop in so-and-so and see what they think.” That’s where you drop a: “Don’t go involving backside members into the progression.”

When your friend is letting his or herself go a little bit: “You look like you’re going to Gonzaga.”

When someone makes a long, protracted excuse after doing something really obviously stupid (like, say, a wandering tale about why they left their headlights on in a mall parking lot, thus requiring you to come out and give them a jump): “That’s a long story, man. I’m gonna wipe the tears from my eyes. Don’t ever throw to the Venus.”

When someone asks you to go out and party on a school/work night: “I was banned from throwing fades.”

Whenever you catch someone in a pretty basic, bald-faced lie: “I can see your eyes all the way here in Tampa.”

When you find out your significant other just spoiled his or her appetite by housing some Golden Grahams before a long-planned date-night dinner: “The mike just jumped the chair route.” (I’m still fine-tuning this one.)

About Last Weekend: The Bounty That Wouldn't Die