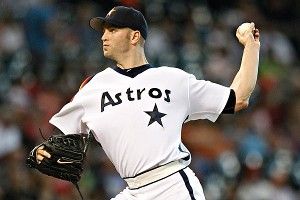 It’s probably not a healthy habit, but it’s tough to look at baseball trades, especially deadline trades, and not immediately flip over to one detail: Who are the general managers that made them?

Such is the case for Friday’s 10-player swap between the Blue Jays and Astros. Alex Anthopoulos has earned a reputation as a darling of analytical circles for some of the moves he’s pulled off. He’s inked several key Jays players to team-friendly, long-term contracts (most notably the five-year, $65 million deal he gave Jose Bautista after Joey Bats’s huge 2011 breakout that now looks like a colossal bargain); swiped Colby Rasmus from the Cardinals in a shrewd buy-low move; and pulled off one of the best dump trades in recent baseball history, dropping $86 million worth of busted Vernon Wells into the Angels’ laps. Meanwhile, the Astros are run by a group of decision-makers with sparkling reputations: Jeff Luhnow, who played an integral role in the Cardinals’ success of the past few years, is the general manager; Sig Mejdal, who’s had chunks of a whole damn book written about his bookish wisdom, is Luhnow’s top lieutenant; and Mike Fast, a PITCHf/x guru who authored some of the most influential studies in the field of baseball analysis, was snatched away to do Houston’s bidding behind closed doors. When these kinds of people make a big move, the tendency is to search for some brilliant, hidden motive beyond the obvious. That’s either giving people credit for past work, or an appeal to authority. Neither’s all that fair.

So, in the spirit of fairness, I’ll offer this: The Jays may have blown it here.

• J.A. Happ is a left-hander heading to his third team (the Astros nabbed him in the Roy Oswalt deadline deal with the Phillies two years ago). He strikes hitters out, with a career K rate a tick above average for a starter at 7.4 per nine innings, and an upward trend at 7.2, 7.7, and 8.5 strikeouts per nine from 2010 to 2012. He’s also made big strides with his walk rate this year, chopping it to 3.36 from 4.78 last year. And he’s inducing more ground balls this season than he ever has before, with a ground ball rate of 46.9 percent. But Happ’s broader profile is one of deception more than dominance. Right-handers have eaten his lunch throughout his career, hitting .278/.349/.502; for comparison, A’s outfielder Josh Reddick is being hailed for his monster breakout this year … he’s at .269/.348/.527 this year. The Jays have said they’ll slot him in the bullpen to start and use him as depth for their depleted rotation. Which makes sense since they can match him against more lefty hitters than righties. But that doesn’t fill a core need given how badly they need effective starters, nor does it net a great keeper, given Happ turns 30 in October and will go to arbitration for the second time at season’s end.

• Brandon Lyon had a nightmarish, injury-plagued season in 2011, tossing just 13 1/3 innings and posting an 11.48 ERA (!!!). Back and healthy this year, he, too, is putting up some of the strongest peripheral stats of his career, with a career-best strikeout rate of 8.8 K/9 IP. But as with Happ, the smart money’s on that spike being a half-season’s worth of statistical noise more than a big leap forward in skills: Lyon turns 33 next month, and his fastball velocity’s been trending the wrong way for a while now.

• Carpenter’s the pitcher with at least a bit of potential here. Counting minor and major league stats, he’s racked up 252 strikeouts in 241 innings. He humps his fastball into the mid-90s and can be effective against righty hitters when he’s locating his slider well. He’s also a 27-year-old career reliever.

Meanwhile, the Astros did exactly what the worst team in baseball should be doing: acquiring as many pitchers with any kind of upside as possible, and hoping they hit the lottery with one or two of them. Houston snagged the 10th-, 14th-, and 20th- prospects in Toronto’s system, per Baseball America’s preseason rankings. Joe Musgrove was a supplemental first-round pick in 2011. He’s a 6-foot-5, 230-pound righty with a mid-90s fastball and is just 19 years old. Asher Wojciechowski was a 2010 supplemental first-rounder. He’s 23 years old and repeating high Single-A ball. But he’s got good command, he’s 6-foot-4, 235, and throws two plus pitches (fastball and slider). Carlos Perez is a 21-year-old Venezuelan catcher toiling low A-ball. The Jays’ organization is stacked with catchers, so Perez might’ve been blocked down the road. But he’s hitting a respectable .275/.358/.447 in a repeat season in the Midwest League, and gets good marks for his defensive potential. Rollins is the least interesting prospect of the bunch, a 22-year-old lefty with a big platoon split and high fly ball tendencies who’s also struck out about a batter an inning in Lansing this year.

Houston will use Ben Francisco as a lefty-masher on the big league roster, probably with an eye toward flipping the 30-year-old outfielder to a needy team for more prospect depth. Same goes for Francisco Cordero, who’d be more useful to pretty much any other team than the Astros.

Given the problems the Jays have had in the past few years keeping their bullpen healthy and effective (only the Cubs have been worse this year by FIP), acquiring anyone with half a pulse probably counts as an upgrade. The Cardinals had a similarly miserable bullpen last summer, made a huge deal to upgrade that pen (and add Edwin Jackson), then pulled off a miracle comeback and rolled all the way to an improbable World Series. The Jays can hope to pull off similar magic this time, and they didn’t need to give up anyone close to Colby Rasmus to do it, nor did they have to add any kind of significant salary, having moved the rest of Cordero’s one-year, $4.5 million pact in the trade.

But there’s a big sense of “That’s it?” here. Thanks to the advent of the second wild-card spot, the Jays find themselves a reachable 3½ games out of playoff position. But they’re also a team going the wrong way, with a 15-21 record in their past 36 games. Their biggest immediate need, by a country mile, was starting pitching, and they failed to address that need for the most part, with Happ at best a back-of-the-rotation placeholder and the Jays not even trusting him to do that at this point. Toronto also failed to acquire anyone with big long-term upside, with a command-challenged, 27-year-old righty reliever the only hope on that front.

This looks like something of a hedge trade, an effort to make the team marginally better and keep the Jays on the edges of a playoff hunt, without selling any stud prospects to do it. But the opportunity cost here was too great. The Jays didn’t necessarily give up a ton, with no one considered an elite prospect switching teams. But there’s value in prospect depth, and Toronto just burned a good chunk of it to make a trade that isn’t likely to make them significantly better, now or later. Moreover, you have to imagine they burned a fair number of man hours constructing a 10-player trade, hours that could have been used on more productive ventures.