How Manchester United’s Ryan Tunnicliffe Made His Father £10,000 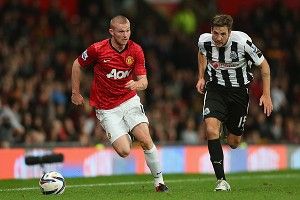 Here’s a heartwarming story from northwest England, or at the very least an example of how much easier it is to monetize one’s bloodlines in other countries. When Ryan Tunnicliffe was 9, his father Michael “Mick” Tunnicliffe placed a £100 bet that his son would one day play for Manchester United’s first team. Young Ryan was, at the time, in the process of joining United’s youth setup after starring for local side Roach Dynamos. Hundreds of promising kids Tunnicliffe’s age go on the books of professional clubs throughout Europe each year, progressing through the academy and reserve ranks, remaining in this quasi pre-professional state for about a decade of their lives, dribbling a ball to lunch and dinner, hoping to one day make a living as a professional.

For a club like Manchester United, the Capital One Cup (formerly known as the Carling Cup or the League Cup) isn’t a “pot” worth winning so much as it is an excuse to let the kids run around and test their mettle against older, more cunning pros. Tunnicliffe — a.k.a. “TUNNERZ” — started last night’s third-round match against Newcastle United on the bench. He bears a faint resemblance to Wayne Rooney (stocky frame, plug head, sneakily athletic) and plays with a box-to-box intensity that might ingratiate him to United boss Alex Ferguson, if he ever gets a chance to play regularly. He’s also, apparently, one of the only people/things on earth the sociopathic former United prospect (and dental-health poster boy) Ravel Morrison did not find to be “shit.”

In the 75th minute of Manchester United’s third-round match against Newcastle United, Ferguson made both Tunnicliffes’ dreams come true. Ryan came on for Belgian defender Marnick “Nick” Vermijl (BELGIUM IS NEXT … but that’s a story for another time) and his father made £10,000. I don’t know what Ryan did on his first touch, because the feed I was watching kept switching back to his proud, gleeful father in the stands. I like to imagine that his father had been extra tough on Ryan as a result of this visionary wager, and in the swirl of that moment, fatherly pride and a few pints congealed as one, and he shed a tear. Or maybe he had taken Anderson at 16/1 to score first as well.

What the Return of the NFL Refs Really Means