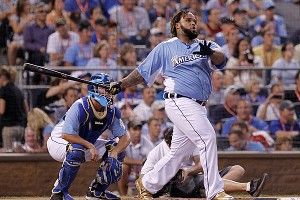 Not to start off all Debbie Downer on you guys, but it’s 7:43 p.m. and I’m not feeling too juiced for the Home Run Derby. Yesterday, I compared it to the NBA slam dunk contest in the sense that it gets really repetitive and boring after about 5 to 10 seconds. It’s one of those events where everyone tries to overcompensate for the obvious monotony by going hog wild with excitement. It’s a little bit like if you were out on a terrible date, and instead of just leaving after an hour, you start laughing hysterically at your own jokes to show the girl how cool you are. And when that doesn’t work, you pretend to choke just so she’ll have to hug you. We’ve all been there, right? The Home Run Derby is faking your own imminent death in order to experience brief contact with someone who despises you.

This is getting sad. This is a sad retro diary. I understand now why they fake the energy — it’s the only way. Time to switch gears:

The one possible savior is Robinson Cano. I have a tendency to get a bit obsessed with my favorite athletes, in a totally safe and non-creepy way, and Cano definitely qualifies. Every so often, I like to revisit this amazing .gif from last year’s Derby win. I’ll watch pretty much anything he does, including ballet. I’m serious.

8:00 — Montage time. We’re learning about the magic of the home run, from Bobby Thomson to Kirk Gibson to Joe Carter. You know what those home runs all have in common? They came in a real game. Against a real pitcher.

8:02 — Here’s what would be awesome: a running race. Tell me you wouldn’t watch a time trial of the fastest men in baseball running around the bases? Or, actually, now that we’re spitballing, there’s this great short story by Louise Erdrich called “The Fat Man’s Race,” which gives me an even better idea. Let’s have Ortiz and Fielder settle it on the base paths.

8:04 — The Zac Brown Band performs a tune called “The Wind.” So appropriate for the Derby, where every ball is at the mercy of the famously wrathful Kansas City wind gods. (Oh good, four minutes in and I’m already delirious.)

8:08 — Lineups! From the NL: Carlos Beltran , Carlos Gonzalez, Matt Kemp (captain), Andrew McCutchen. From the AL: Robinson Cano (captain), Jose Bautista, Mark Trumbo, Prince Fielder. And those Kansas City idiots just booed Cano. They just made themselves public enemy number one. So angry right now. Hey, a joke: What do tonight’s hits and the American people have in common? Answer: The ones that matter fly over Kansas City.

8:12 — “The secret is to enjoy it and have fun,” says Robbie of the Derby. Now his dad, who pitches for him, is speaking Spanish in his interview. I also speak Spanish, but not in the sense that I can understand it or communicate basic thoughts to other Spanish speakers.

8:18 — What if the little kids in the outfield had giant nets, and could rob home runs? I’m talking really, really big nets.

8:20 — Beltran up first. Hope nobody throws him a curve down the middle, right Mets fans? Right?!

8:22 — Usually the kids in the outfield are total crap, but tonight they’re making some plays. Which is too bad, because most of this blog was budgeted toward being mean to kids.

8:23 — And just as I say it, four-kid pileup on Beltran’s tenth out, a liner to right! Man, those kids stink! Beltran hits seven total, and the longest was 436 feet. For the curious, the longest home run in Derby history belongs to Sammy Sosa, who hit it 524 feet in 2002. What a lovable cheating scamp!

8:27 — Bautista up, and his pitcher, last name Abraham, is not having the best showing. Down to his final out, “Joey Bats” finishes on a smoking tear to end with 11 home runs. That’s a nickname for Bautista, not his hilarious sidekick.

8:30 — Don’t you get the sense that David Ortiz will be hanging out at the Home Run Derby until he’s, like, 80? (Girlfriend just mishears the following sentence: “He jumped at that pitch!” The confusion is on the final word.)

8:40 — Girlfriend is proud that she knows Carlos Gonzalez’s nickname, “CarGo,” from when we saw him play in D.C. this past weekend. Then she asks if they use metal bats for a Derby. Now she’s making a ton of noise in the kitchen. Now she busts me for accidentally breaking the bottle of hazelnut syrup for her coffee. Love is complicated.

8:42 — I’m already bored, hence the off topic stuff. I want to converse as if I’m sitting in your living room with you, watching. Except that if I was in your living room, I’d be asking for food. And grudgingly wearing a shirt. Grudgingly. CarGo puts out a weak performance. He won’t be joining us in the semis.

8:52 — Just once, I would like to have a Home Run Derby decided when the Derby-tying home run hits a bird and falls back in play. Is that too much to ask?

8:53 — Hurts me to say this as a Yankee fan, but I love David Ortiz. He’s single-handedly keeping this thing upbeat. And there’s something endearing about the fact that he just showed up, without being a captain or team member, to take center stage and cheer everyone on. Trumbo gets seven.

9:00 — You may notice the pace has slowed down. Two reasons. One, I have a loose word limit and I talk too much. Two, they decided to put Cano last of the eight hitters. This is like crawling through a desert when you know there’s an oasis a mile away. Sure, there’s a light at the end of the tunnel, but it’s hot and miserable now, and it’s awfully tempting to lay down and die. Speaking of dying, McCutchen with four.

9:08 — I think there’s one baby all the baseball players pass around when they’re on TV. Huston Street has him now. (New York joke: It’s pronounced ‘Howston Street.’)

9:13 — I was just curious to see if anyone had ever put up a zero in the Derby, and holy hell, look at the 1990 Home Run Derby. Five players got zero, and Ryne Sandberg won with three. Who was pitching to them, some guy with a problem that makes him a bad pitcher? Come on! Prince Fielder disappoints with five.

9:18 — I’m not even a Dodger fan, and I’m annoyed that Matt Kemp is doing this despite his hamstring injury. It’s just stupid. There’s no way around it.

9:21 — Bryce Harper has a feral quality about him. He looks like he would eat your pot roast without utensils. Kemp manages not to hurt his hamstring, unless humiliation hurts your hamstring: 11 swings, 10 outs, one home run.

9:30 — ROBINSONNNNNN! The morons who can’t appreciate a true genius are booing. It’s getting louder … and now they’re cheering like crazy for every out! Shouldn’t the Yankee AAA franchise fans be supportive? Is the hostility rattling him? Five swings, five outs. Don’t go out like this, Robbie! Ortiz and King Felix give him some words of support. I know he’s going to stick it to them. The Derby is finally interesting. He needs five to advance.

9:33 — Granderson and Sabathia go out to the mound to talk to Cano’s dad! Fantastic drama. Come on Robbie … eight swings, eight outs. Shit.

9:34 — That’s it. An unbelievable goose egg. Cano gets love from the American League players and tries to smile it off, and all the corn-fed, cud-chewing mouth-breathers are loving life.

9:39 — This is a lot like watching Duke lose an NCAA tournament game in a “neutral” venue where everyone actually hates them, and the game turns into 40 minutes of unfiltered vitriol. Watching Robbie go down like that was really hard to handle. I’m a little traumatized. Possible PTSD over the next week or so.

9:43 — You know how people say they’re “all in” when they get psyched for something? Well, with Robbie out of the Derby, I fold.

9:44 — I think George Brett just said “poopies in the pants” and made a weird finger-waggling motion. I’m all in again! Also, it reminds me of this timeless video of Brett’s monologue on a similar topic. (Definitely not safe for work).

9:51 — George Brett is beautiful. He’s your hilarious uncle, the kind with 3,000 stories ready to break out at a moment’s notice, who will talk for hours at a time. I actually have an uncle like this, and I still remember one time I was hanging with my cousins late at night, and he walked in out of nowhere, picked up a Bic, and went off on a improvised 15-minute rant about all the different ways you could kill someone with a pen, acting each one out as he flew all over the room. It’s still one of the funniest moments of my life. I think Brett has that crazy uncle gear.

9:57 — “Let me ask you something. If you’re State Farm, do you want guys to do it?” asks Brett, referring to the money they have to pay to charity if the players hit home runs on the tenth ball. He is absolutely the best.

10:17 — It comes to a swing-off between Bautista and Trumbo for a spot in the finals, and I’m going to bed. Sorry, but this is more than I can handle. It’s nobody’s fault; there’s just not a good way to make home run after home run interesting for three hours. I’ll wake up in the morning and pretend to live blog the winner. Time stamping it for 1 a.m. should work, right?

1:00 — And Prince Fielder takes it, with a final round of 12 dingers, for his second Derby title! DING-A-LING-DONG-DONG-DINGER-DO-RIFFIC!