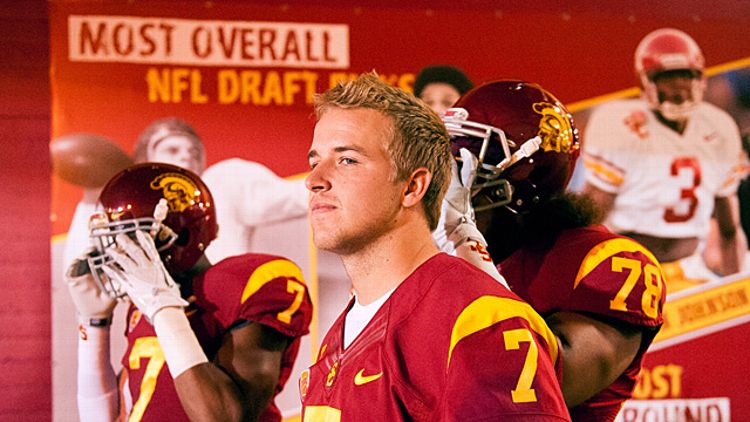 As a 32-year-old, 5-foot-6 Jewish guy from Philadelphia who has been rocking a buzzcut for the entire 21st century, I think it goes without saying that I relate to Kentucky’s flat-topped phenom Nerlens Noel in a multitude of ways. The most pertinent being that sometime around Valentine’s Day during our respective freshman years of college, we both ended up writhing on a hardwood floor, wondering whether we were going to die or whether our futures were just totally screwed.

There are minor differences, obviously: Noel was well on his way to becoming the no. 1 pick in the NBA draft before tearing his ACL and being shelved for the season. His road to recovery will involve brutal, demoralizing physical rehab and doubts about whether he can ever regain confidence in his body. Mine was likely some horrifying incident with Goldschläger as a fraternity pledge, and my salvation mostly entailed copious amounts of Gatorade and switching to alcohol that didn’t have floating pieces of metal as a selling point.

The speculation about Noel’s NBA prospects quickly ran amok, as did the questions about whether it was unfair he wasn’t already in the league. You wanna know who was paying just as much attention as any NBA GM? Jadeveon Clowney. Even before Noel’s injury, there was a rising chorus of writers suggesting the best thing Clowney could do after his fatal flying guillotine mic-drop of a hit during the Outback Bowl was to sit out the year completely and prepare for the NFL combine. And why not? He’s the no 1 pick in the 2013, 2014, and 2015 draft at this point; it all just depends how much he likes scenic Columbia, South Carolina. All he can do is devalue his stock. And it’s not just the injury concern — perception is reality in the NFL, and here are five guys who could certainly tell Clowney about how to leave ’em wanting more.

2012 Status: Consensus no. 1 pick
2013 Status: Matt Leinart, minus the aura of celebrity that can only be obtained vis-à-vis Nick Lachey

You could argue the entire USC football program, with the exception of Marqise Lee, might’ve been better off on some mysterious self-imposed ban in 2012; not just to preserve the perceived stock of its players, but as a kind of preemptive strike, an insurance policy against future sanctions that will almost inevitably arise once Lane Kiffin gets kicked to the curb.

But undoubtedly, no one cost himself more money in 2012 than Barkley. The Kansas City Chiefs have the no. 1 pick in the NFL draft, and they are dying to do the wrong thing when it comes to selecting their next quarterback because they are the Kansas City Chiefs. This is the exact situation where a guy like Barkley should be selected, on GP. He looks the part. He played for USC. Seriously, Geno Smith? Mike Glennon? Barkley will not be taken with the no. 1 pick, unless it’s the first pick of the second round.

But here’s the thing: Remember the juggernaut status of the 2005 USC team? People seriously wondered whether they could beat, say, the Texans at the time, even though they couldn’t beat Texas. Flash forward eight years and they’re already the subject of a Sports Illustrated “Where are they Now?” piece. What happened? Truth be told, that stacked USC team was in no way realistic in terms of displaying NFL preparedness: The NFL is a league of parity; the Trojans’ third-stringers would have been favored in 75 percent of all bowls. Now, Matt Barkley … you could say he had a down year, made questionable decisions, and didn’t show proper leadership. But the dude still got seven wins with a completely horrendous offensive line, no real game plan, and nagging injuries. If that doesn’t show you he’d make a seamless transition to the Chiefs, what will?

Speaking of my freshman year, I don’t think anyone hooked up more often than my roommate. I still wake up in cold sweats thinking I’m on the couch in the middle of the dorm’s common area while Guster plays faintly in the background. He wasn’t a particularly good-looking or charming guy; he wasn’t even really that funny either. The most enduring qualities are that he owned six Dave Matthews Band posters and we really got into it over how often he could play Goo Goo Dolls’ “Iris” while I was in earshot. He just happened to know what he liked and who liked him. Point being that, for college freshmen, it’s often more a matter of being at the right place at the right time than it is any sort of skill.

How does this apply to David Amerson, who snagged an unfathomable 13 interceptions in 2011? Advanced metrics suggest that an extremely favorable turnover rate isn’t sustainable: interceptions get dropped, fumbles bounce differently, etc. Amerson was sure to have his numbers dip in 2012, and once you develop a certain kind of reputation, people, um, stop throwing at you. Except quarterbacks threw right at Amerson, including the famously scattershot Tyler Bray, who absolutely torched the dude in NC State’s embarrassing and totally representative season-opening loss to Tennessee. But this is still a position where, I shit you not, “ball skills” are evaluated, so there is room in the NFL for a veritable dumpster diver.

Unless you’re Brian Kelly — and I’m willing to wager you aren’t, because reading hilarious list-style blog pieces is not CHAMPION SHIT — you likely have no idea who Jarrett Grace is. And even then, Brian Kelly might not be all that aware of Grace’s existence (he’s never struck me as much of a people person).

But it doesn’t really matter who Jarrett Grace is as a football player or as a human being. The important thing is that he the guy behind Manti Te’o on Notre Dame’s depth chart and because he actually played this year and secured seven tackles (five unassisted) in his limited playing time, that’s all he is. But let’s suppose he knew way more about the Te’o situation than the rest of us, even to the point where he knew it was a fraud and it would end something like the way it did. Suppose he took the entire year off under mysterious circumstances and declared for the NFL draft the moment everything popped off. Surely there’d be questions, and he could answer with gnomic, cryptic jewels: “If only you knew what I did to protect not only that man, but myself”; “The hits I’ve taken in the past year dwarf any I would’ve suffered at the hands of Eddie Lacy”; things like that. The imagination runs wild. Jarrett Grace is the new Leon Sandcastle instead of the current Jarrett Grace.

See, from most accounts Marcus Lattimore is one of the nicest guys in the world, the kind where his legs and earning potential get shredded to pieces and the first person you hear from is his mother or a tearful Steve Spurrier. In no way, shape, or form does he deserve such tragedy to befall him, and I say that even as a Georgia fan. But c’mon, you don’t think he’s getting in his teammate’s ear right now, saying “money over everything”?

But if Lattimore is proof of anything, it’s the absurdity of the term “injury-prone” being used like it applies to someone with a weak immune system. Look, if someone didn’t want to hire me because I have bad allergies and when I took the regular kind of Sudafed instead of the non-drowsy type, I was incapable of typing for an entire day, that’s fine. I can get allergy shots or drink Emergen-C or whatever. But I would imagine “being prone to injury” is a quality shared by anyone who partakes in a violent sport with an alarming frequency of its participants donating their brains to science. And by “alarming frequency,” I mean to say that it’s happened more than once.

But I digress. I won’t say, “go watch the clips of Marcus Lattimore’s injuries,” because no one in their right mind should watch those. But all the same, I’m fairly certain that the sort of Final Destination-style twists and turns on Lattimore’s knees would take anyone out. But now dude is “injury-prone,” and I wish NFL draft profiles would be more honest and just say “bad luck” instead.

Vibe with me here for a bit. As you certainly know, 50 Cent’s epochal Get Rich or Die Tryin’ celebrated its 10th birthday recently, leading us to reflect on how many times people took up Fiddy on his offer to be called “Ferrari F-50” or “Flipper” (because he turns the money over).

Anyways, it was a hell of a narrative back when our fact-checking abilities weren’t as strong — guy takes the underground by storm and just when he’s about to go major, he gets shot, blacklisted, and models his comeback on some Count of Monte Cristo steez after Tony Yayo lends him the book (that last one may not have actually happened). I’m not saying De’Anthony Thomas had a bad year, but after his mindboggling yards-per-touch rate in 2011, what exactly could he do for an encore? Any time he doesn’t score a touchdown, it’s vaguely disappointing. He’s Get Rich or Die Tryin’, the movie — the point of overexposure.

But think about it, who can do more for DAT’s bottom line, Nike or Oregon? And who could do more for Nike’s bottom line, the football version of 50 Cent or a guy who, for all intents and purposes, might just turn out being somewhere in between Darren Sproles and Dexter McCluster? Why wouldn’t Nike do the following after Thomas’s triumphant 2011 season: DAT returns home to Compton and suffers a staged gang-related injury. No one knows if he’ll make it out alive, let alone if he’ll ever don the green, gold, silver, black, white, chrome, pewter, chartreuse, goldenrod, aquamarine, and indigo of the Oregon Ducks ever again. But, in a fit of charity, Phil Knight declares that no expense will be spared in using Nike technology to rehab him to becoming some kind of super weapon. They will show surveillance footage of him working out on space age exercise equipment in Beaverton, viral videos of him running the 40 in 4.2 while doing backflips. That’s the plot of the “In da Club” video; you could even have Xzibit do cameos. Compare that to making Tennessee Tech players look kinda silly and you get where I’m coming from.