The Designated Player: The Damned Polite (Notes on MLS ‘Access’) 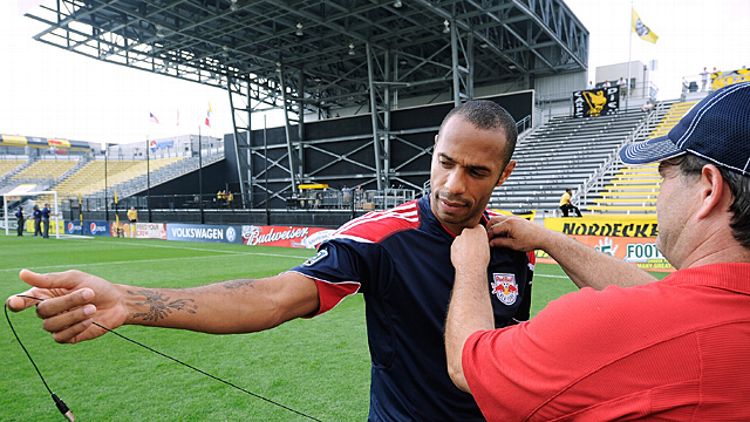 “(The American) is always in the mood to move on … He is devoured with a passion for movement, he cannot stay in one place; he must go and come, he must stretch his limbs and keep his muscles in play. When his feet are not in motion, his fingers must be in action … He always has to have something to do, he is always in a terrible hurry. He is fit for all sorts of work except those which require a careful slowness. Those fill him with horror; it is his idea of hell.”
—Michel Chevalier, Society, Manners, and Politics in the United States, 1839

“Sorry, but Thierry has to go now.”

Henry springs to his feet laughing as the press officer intervenes.

The small group sitting at a table in a Red Bull Arena executive box have asked maybe three questions of a player who usually has to endure more. This is MLS media day — a day when key players from every MLS team are brought to New York to film preseason spots with the league, sponsors, and TV partners, and somewhere among all this, find themselves ushered through a door to meet a few members of the local and national press in quick roundtable conversations. Henry, understandably, is in demand and now he bounces to his feet and bounds cheerfully out of the room, pursued by a team carrying clipboards. Those of us left in the box reset our recorders as Chris Wondolowski edges politely in to take his place.

Executive boxes are strange places at the best of times, meant to survive a glance, but not particularly withstand scrutiny. After all, they’re really corridors to the action rather than event sites themselves. So a walnut veneer suggests quality rather than delivering it; a carpet symbolizes luxury; and everything in the room theatrically conspires to suggest you would enjoy yourself more facing out of the window. In the box I’m sitting in now though, the windows in the box are papered over, presumably so that we, the loose-lipped, Twitter-happy members of the U.S. soccer media don’t give advance notice of the new MLS uniforms, apparently being modeled somewhere in the snow-covered field below us by a gaggle of frozen players. The blocked windows now make everyone more aware of the artificiality of their surroundings and, in turn, the artificial frame for these conversations, as players drift in and out of the room for our moment of access.

Access. One of the pleasures of a book like David Peace’s The Damned Utd and all of its intimate, dark-night-of-the-soul wrestling with the persona of Brian Clough was that it took the voice recorder where the reader wanted to go — to hear a first-person inner monologue that even the most artful interview can never get close to. With someone like Clough, for whom management was so much about the cultivation of his own larger-than-life persona and infecting his teams with his seemingly invincible self-belief, the desire to look behind the curtain and see even a fictional inner life of the wizard was irresistible. And in some ways it was a desire created by the elaborate front Clough himself had put up.

Likewise, when tourists on the Old Trafford stadium tour scraped up bits of chewing gum possibly masticated by the roiling jaws of Sir Alex, amid the (gross) absurdity of it all, I had to admit that I recognized the twisted logic behind that sort of fetishism — the fan’s idea that if they could just gain access to one more particle of information, or some edge of intimacy/ownership, then some bigger picture might reveal itself (presumably in spearmint runes). It perhaps relates to a belief that the helplessness of being a fan could somehow be mitigated by the feeling of empowerment that comes from being “in the know.”

There’s little of that sense of aura in MLS — and as a result the league has a relationship to player access that’s very particular, at times generous and frustrating in equal measures. At today’s event, we get to see every player, some at length, some very momentarily, as if we’re watching a sushi conveyor belt on which someone’s cranking the speed dial between three and 11. Dan Kennedy floats through, seeming folded in on himself — perhaps the personification of his increasingly isolated presence at Chivas. He thinks better of saying more and leaves. Steven Lenhart looks like he’s melting off his chair, as he maintains a kind of affable, stunned insolence. And throughout the day, I’m left with a minor key impression familiar to most people who watch the ever more highly defined, multicamera spectacle of contemporary sport, even one as eager to dent the public consciousness as MLS — the more elaborate the surface gets, the less penetrable it seems. Listening to the recordings afterward, I’m not sure if 20 minutes with Jay DeMerit evenly talking about the nature of leadership told me more than five minutes of Darlington Nagbe’s muted brevity on his position in the new Portland regime (up front in a 4-4-2, wide left and drifting inside in a 4-3-3, for what it’s worth). The players are unfailingly polite, animated at times, and in many of the ways that matter when humans try to meaningfully communicate with each other, utterly unreachable.

To be clear, MLS offers way more access to players than other top-level professional soccer leagues. Paradoxically, what that tends to mean is less a sense of getting to look behind the curtain, and more a sense that the curtain has been moved deeper into the stadium. I could be mean-spirited and paraphrase Dash from The Incredibles to claim that the result is “If everybody is special, nobody is.” But actually I like the fact that access is pretty egalitarian across the board, logistics permitting. I’m just not always convinced we’ve worked out what to do with it. A press officer I know from a Premier League club in England once glumly told me that he spent his days trying to find new ways of saying “no”; another colleague told of being lied to about a Chelsea player’s presence in the building for a pre-arranged interview, while the player ate lunch in full sight behind them. Yet most communications directors I’ve dealt with in MLS are unflaggingly helpful and spend their days trying to accommodate demands — even those at clubs like LA or New York in the era of Beckham and Henry. Those demands include national and sometimes international media, but also the wealth of bloggers who the league can ill afford not to cultivate — especially when the demographic of those watching, consuming, and now reflecting on the domestic game tends to skew younger than in other countries.

Some players adapt quickly to this open regime, patiently negotiating the more asinine questions or learning to play with them. For Henry, the press, while occasionally an unwelcome presence in the locker room, tend to give him an opportunity to riff, hold court, or just spar for fun. Others, like Robbie Keane, soldier on gamely through interviews, while giving the impression they’ve never read one themselves, and can’t for the life of them understand why any other player would want to.

A personal favorite moment was Tim Cahill’s face when the media arrived in the locker room after his first game in New York, upon the league-mandated 15 minutes after the final whistle. Reared on English changing-room sanctity, he appeared to be glancing around nervously, seemingly wondering if anyone else had noticed the apparent zombies-with-dictaphones apocalypse slowly invading the Red Bulls locker room. Was it down to him to take out the biggest one? In fairness he adapted very quickly, and by the last game of the season it was Cahill who stepped in front of the press corps to prevent his distraught teammate Kenny Cooper from having to answer questions about his penalty miss in the playoffs.

And as I’ve noted, the degree and type of access affects more than the players. Following Twitter on a big game day or a Jurgen Klinsmann press conference can be an exercise in chattering redundancy. A small version of this occurs at today’s event. Between interviews, quotes are tweeted out, blog posts edited, beat writers (of whom there are very few in the traditionally understood sense of the word) compose news stories for later in the day, and a constant tempo around the production and dispersal of information prevails. To be honest, it’s a rhythm I’m usually in lockstep with depending on the assignment; but today, with no immediate deadline pressing, I end up surreptitiously watching as the newsworthy stories and choice quotes leak out of the room.

As with Kennedy and Lenhart, other instant impressions present themselves. I can say that Saer Sene is rather wonderfully odd — lanky and accessorized like a geek designed by Jean Paul Gaultier. Zach Loyd is friendly but self-conscious, warily mindful of the transcript, while Patrice Bernier is a revelation — erudite and reflective on the game and the real-politik of Montreal’s expansion year. Aurelien Collin works a laid-back presence that stays just the right side of indifference, while Drew Moor has an almost uncomfortably open countenance — I must have seen him in profile at one point during the day, but he has one of those faces that seem to be earnestly facing you at all times. They’re all interesting round-table interviews in their way, and if there’s demand (and Grantland feels flush with transcription funds) I will gladly pass on what was said, news cycles notwithstanding. Also, just so you know that I’m not entirely feckless, I will be following this story with a couple of more detailed interviews with players who were present. It was a useful day.

But the overriding impression I left with was not of any single thing that was said, but of two cross-sections: one being the array of the successful modern MLS player — polite, sloppy-stylish and media trained — and the other being one that suggested itself between interviews as I walked the corridor to the bathroom or refreshment room. Seeing numerous repurposed rooms maintain a steady hum of photo, film, or interview activity, I keep finding myself glancing to my right, where giant windows revealed the frozen land outside the stadium, framed by a misty silhouette of downtown Newark. I imagined looking back through the window at this warren of publicity at work, then back at the view of an American city. The view seemed to offer a reproach of scale and indifference, or a reminder that for all the media access MLS might grant to its players, it’s the access America at large grants to MLS that will ultimately determine its fate.

NBA Shootaround: Under My Thumb