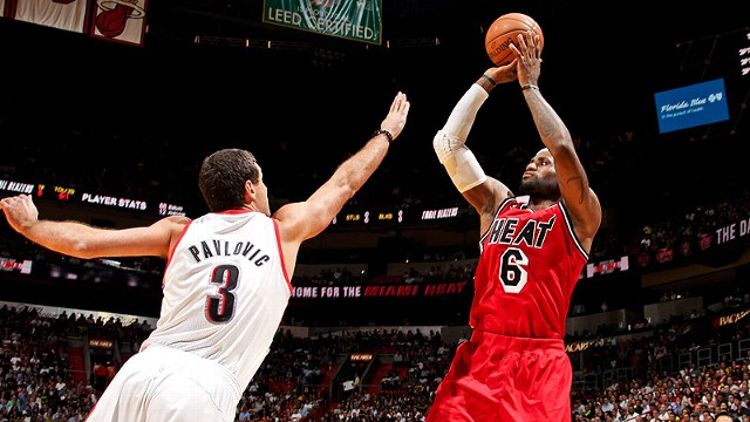 So, it’s All-Star weekend and the teams have already been chosen. But, I want to use this symbolic time on the NBA calendar to pay tribute to the guys who are having the most efficient shooting performances this season. I’ve selected my own all-star teams on the basis of shooting efficiency. The CourtVision all-stars are the guys who are scoring much higher than league averages at their most common shooting locations. Unsurprisingly, there is a lot of overlap with the “real” all-stars here, but there are also some interesting differences. Let’s start in the backcourt.

Though to most Americans he’s still most famous for dressing up like an 80-year-old Unabomber and hustling unsuspecting playground dudes, NBA fans have come to recognize Kyrie Irving as a true superstar. Everybody loves watching the Cavs all of a sudden, and with all due respect to Alonzo Gee, it’s pretty obvious why. Although he’s only starting in the “real” All-Star game because of Rondo’s torn ACL, one could easily argue Irving deserves to start anyway. He’s having a great season and there are only a handful of players more enjoyable to watch play basketball in 2013. While we all know that he’s got the slickest handle in the league, I still don’t think many people realize what a great shooter he is. Irving scores at high efficiencies from everywhere, but he’s especially potent beyond the arc, where he’s shooting 43 percent this season. Also, despite the fact that he’s still only 20, he has the kind of midrange arsenal you would only expect from a cagey vet like Steve Nash or Tony Parker. 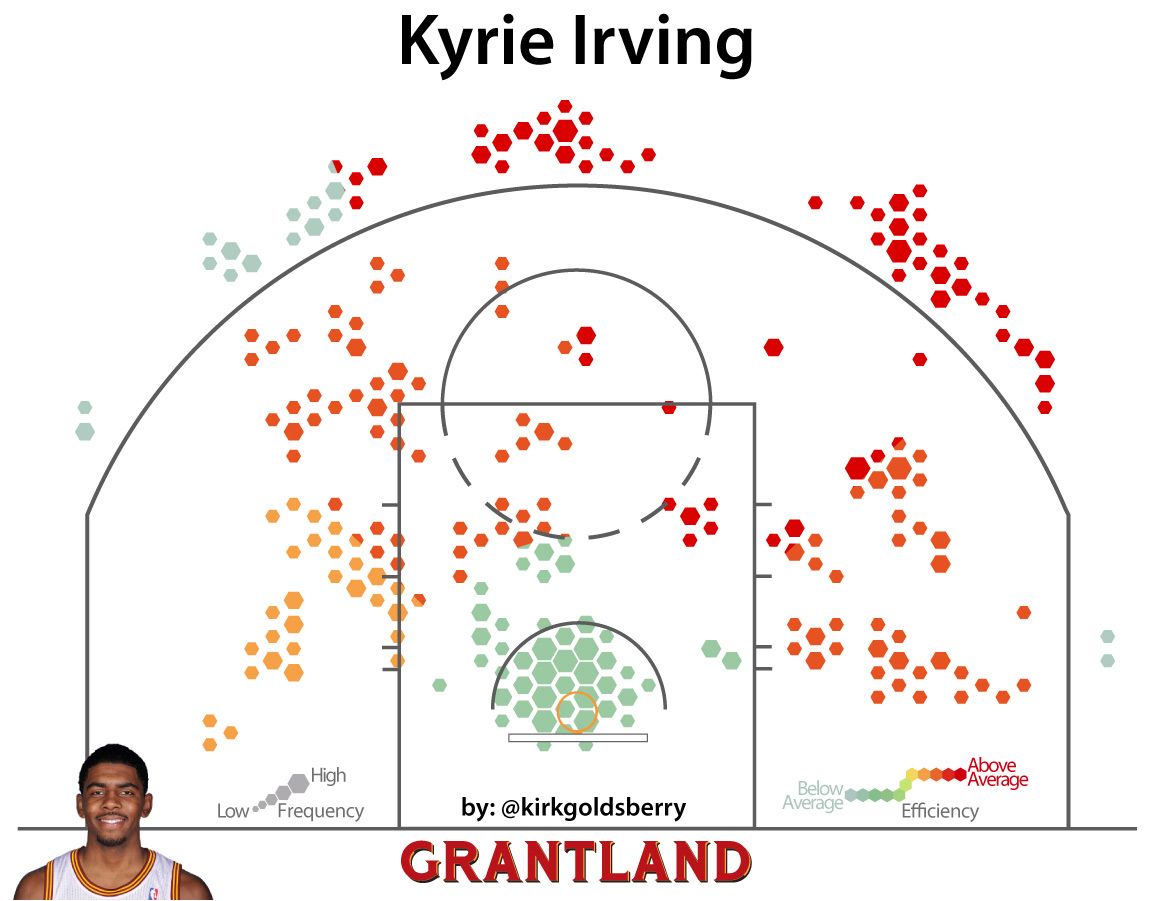 Redick is an underrated ball handler and an above-average shooter from his most common spots. He’s deadliest from the left wing, but is dangerous anywhere “above the break” of the 3-point line. Redick’s ability to make long 2s is likewise very impressive. He’s also the only CourtVision all-star to also make the Vidal Sassoon all-stars — take that, LeBron. Redick deserves a chance to flash his accuracy on a contender later this season. 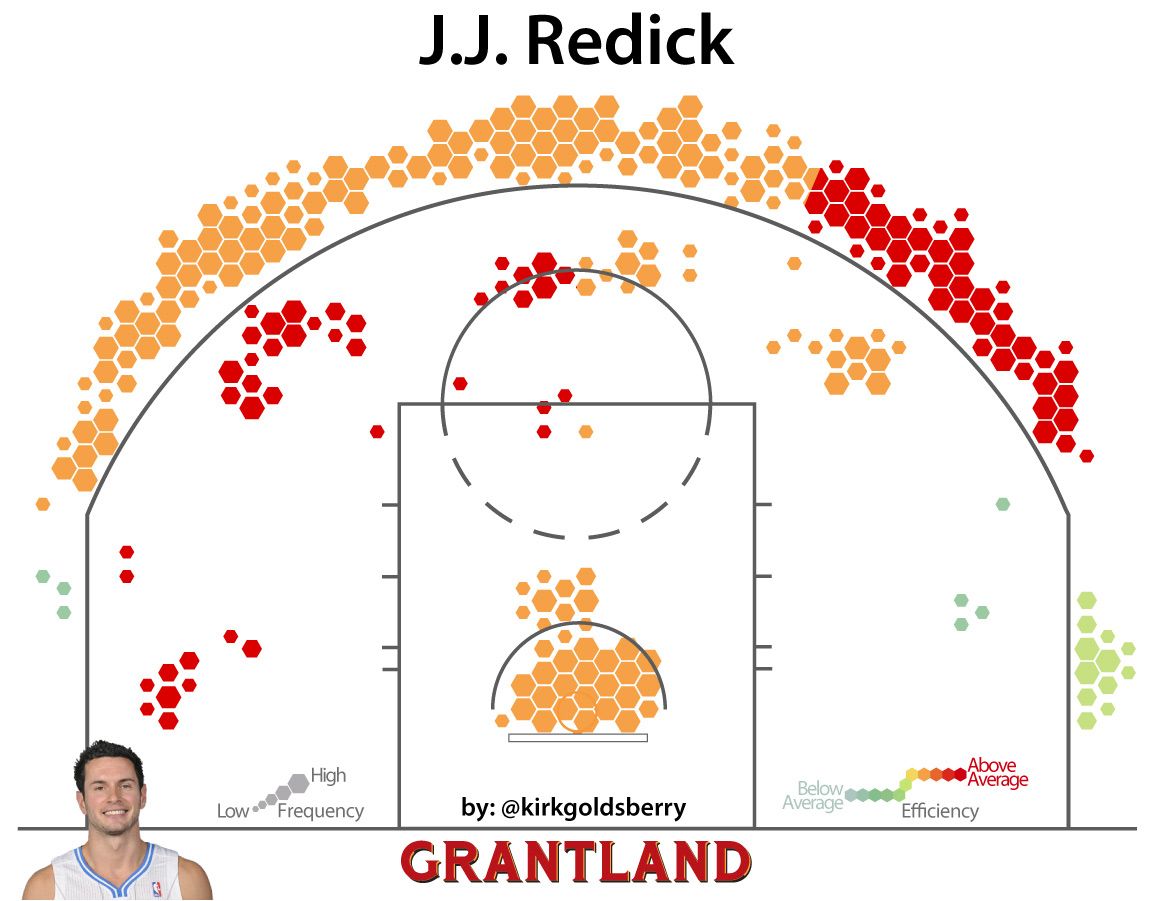 At the risk of belaboring the NBA meme of the week, LeBron is having a really good season. What else can be said? Well, I can report that he’s actually having trouble scoring from the midrange around left baseline, making only 30 percent of his 100-plus attempts between the left block and the 3-point line. Aside from that he’s having a Holy shit kind of season that I recommend everybody enjoy. Your resistance is futile. He leads the league in efficiency near the basket, where he’s been an absolute beast during the last six games. Last year, I was fond of saying LeBron is an unexceptional scorer beyond eight feet. I don’t say that anymore. LeBron showed up this season with a jump shot that is borderline elite in its efficiency, while his 3-point efficiency remains in the top 20. He’s got to work on that baseline game, though! 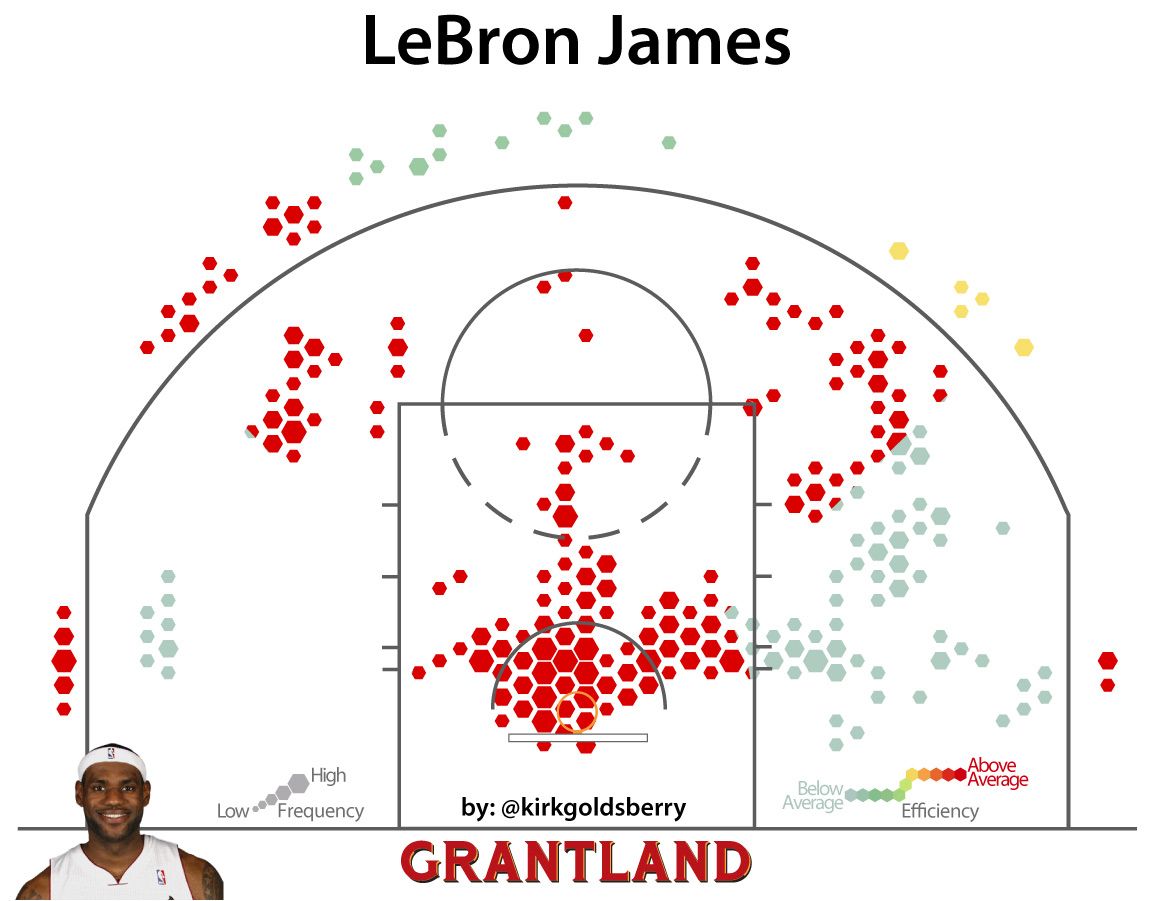 Chris Bosh remains one of the most underrated shooters in the NBA. He scores efficiently from midrange locations that (1) the league as a whole struggles from, and (2) enable the Heat to space the floor in scary ways. Bosh’s ability to hit those shots behind the elbows provides a lethal complement to the ways in which his teammates score. LeBron and Wade attack, Ray Allen and Shane Battier spot up, and Bosh fills the space in between. I’m still not sure what Joel Anthony is for (just kidding, we all know he fills the Canadian quota). Also, don’t forget that Bosh is still a force near the basket. 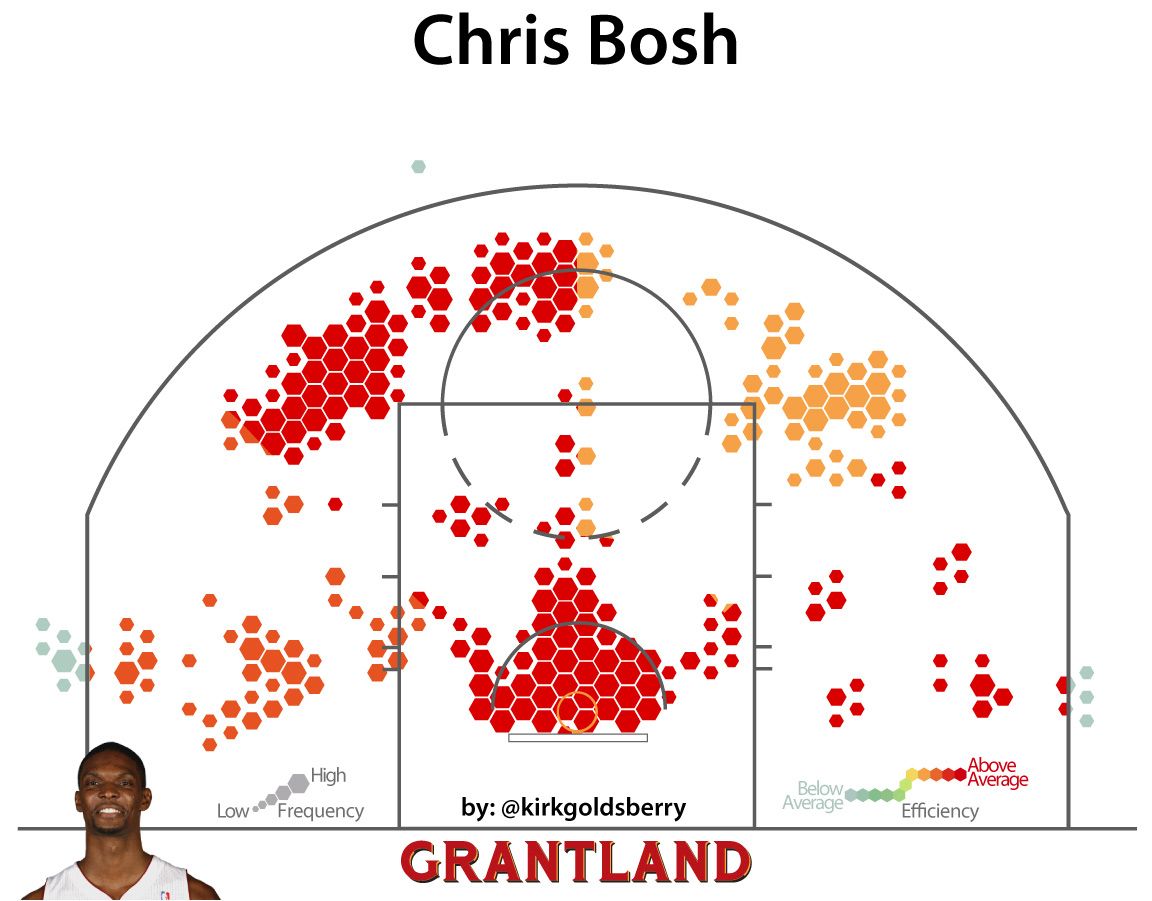 Last but not least is the crazy uncle of the NBA, Kevin Garnett. Like Bosh, Garnett excels at hitting that midrange shot near the elbows, opening up lots of pick-and-pop situations for the Celtics. Unlike Bosh, KG is not as effective near the basket as he used to be, but he can still score effectively as a post-up player. Still, a vast majority of Garnett’s shots come from the midrange, where he is still an elite performer. He also remains a beast on defense and in close range of the courtside microphones. He is the FCC’s least-favorite player. 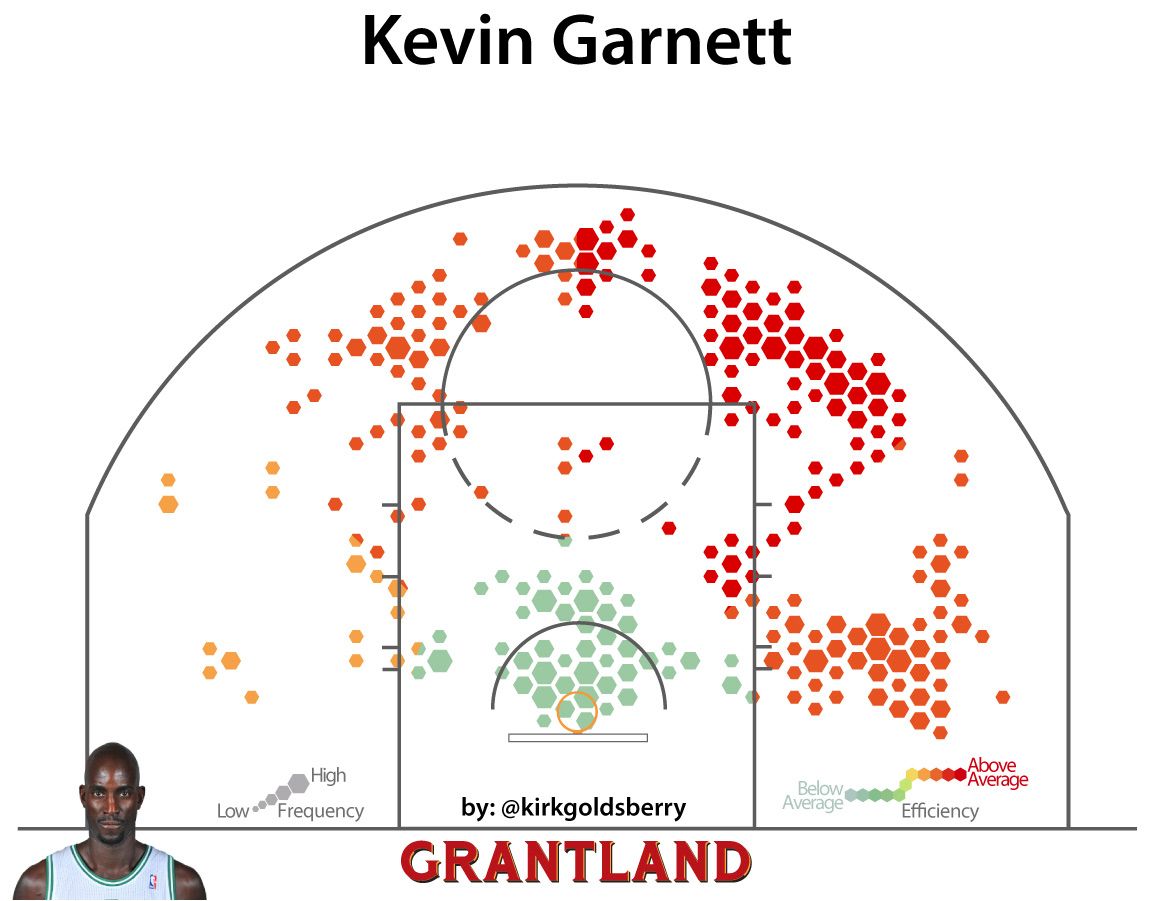