Why Derrick Rose Shouldn’t Play for the Bulls This Season 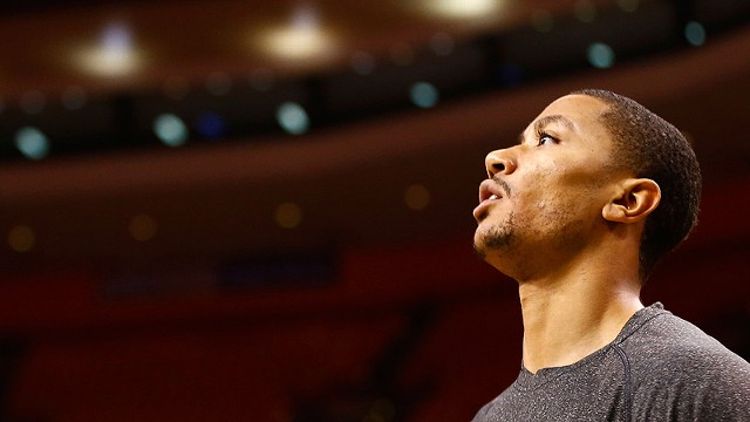 The past 10 months of Chicago Bulls basketball have been an exercise in expectations. When the 2012 regular season ended, those expectations were that the no. 1-seeded Bulls — one year older, one year wiser — would give Miami all it could stand come the Eastern Conference Finals. When Derrick Rose crumbled to the court in the first game of the first round of the playoffs, those expectations changed.

This season — without Rose and without much of a bench to allow them to survive for stretches in his absence — came with its own expectations. When the Bulls were threatening to overtake the Knicks for the no. 2 seed in the Eastern Conference, and with Rose’s return supposedly on the horizon, those expectations changed again.

The reaction to Rose’s comments yesterday is a consequence of those changing expectations. The thought became that if this team can win without Rose, imagine what it could be with him. After a year spent reconciling being jettisoned from the contender ranks, Bulls fans immediately wanted back in. This is the disconnect between expectations and reality. In October, there was willingness for patience. That’s now gone, and it’s without reason.

Bulls fans and LeBron truthers will point to what happened last April and wonder “what if,” but the fact is that Miami was the better team. Not much had changed since James clamped down on Rose the MVP, and everything about last season pointed to a second telling of the same story. This Bulls team is not that Bulls team. Jimmy Butler may be a revelation, but he comes nowhere near solving many of the woes Chicago faced against Miami. They still lack shooting. They still lack a reliable second scorer. And now, they lack 15 minutes a game from one of the two best defensive centers in basketball.

What, then, are the realistic expectations upon Rose’s return? Even if we suppose he returns nearly at full strength, and without a minutes restriction, it will undoubtedly take some time to adjust to a roster different enough than the one he last saw. And let’s say that transition happens quickly, and smoothly, and these Bulls do end up maximizing whatever potentialities they have. What then? Sure, they might beat the Knicks. But that’s as far as this goes. And that’s not enough.

There are plenty of arguments about why Rose should or shouldn’t be back. As Jon Greenberg wrote today, there are more than a handful of entities who have a hefty stake in Rose’s future. Supposedly, it will be Rose, and not those parties, that eventually decides when he chooses to play again, and it will not be before he’s fully healthy (he can’t even dunk yet!). The notion that Rose would choose to put off his return is difficult for fans on more than one level. Some of it is tied to emotion. In a football city, Rose has become an athlete who’s beloved like few others have been. I can say I have missed watching Derrick Rose play basketball, but again, hoping for his return merely because we want to be entertained is as short-sighted a view as any.

The argument that I’m concerned with is one about competition. A contingent of fans is likely to crow that if Rose were a competitor, he’d want to be on the floor. That’s what Michael Jordan did. To them, I would say I have a slightly different understanding of competition.

As someone who still harbors a healthy amount of naivety when it comes to teams I support, I’ve always hoped the ultimate goal, the ultimate competition, was to win championships. If that is the goal, then the argument for Rose to come back this season, at any level of health, is foolish. I don’t know for a fact that there would be any risk in Rose returning, but I do know there would be none if he did not. This is a team that is a piece and a year from contending for a championship, and it’s best we all remember that.