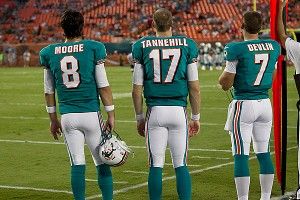 The U.S. Bill of Rights says that, as an American, I have “the right … to assemble, and to petition the Government for a redress of grievances.” That sounds like a lot of work, but I’m going to pay tribute to America just the same. I refuse to do a straight-up recap of last night’s Hard Knocks. What’s my grievance? No Mary Garrard, no peace. Until Mary Garrard and her ratchet accent come back on my screen, I’m not going to treat Hard Knocks like the masterwork of documentary filmmaking that it probably is. I’m going to just give you my raw notes. BRING BACK MARY.

Jeff Ireland needs to dress like a grown up … He could also stand to be a human being and be present in the moment. If I’m a prospective free agent watching this and I see his reaction to Reggie Bush when Bush asks if he and Karlos Dansby can have a moment later on to discuss the release of Chad Johnson, I stay about as far away from Miami as possible … Bob Marley sing-along was fun, but it’s hard to imagine these guys winning an actual football game after watching that scene … Mike Sherman should be a motivational speaker for people who actually don’t want to do anything with their lives but eat mac and cheese and watch Cajun Justice … “Bad everything by the right guard.” … What was Joe Philbin’s job interview like? … Not to be a vacant shell of a person, but isn’t Eric Steinbach getting an inordinate amount of face time with Philbin? “So your back is still made of SOS sponge? Good talk.” … If Hard Knocks is Hearts of Darkness for the Apocalypse Now of the coming NFL season, that means Mike Sherman is definitely John Milius … “Am I on drugs?!” … Can we get a Vontae Davis and Mike Sherman sports radio show? … It can come right after the Matt Moore–Zac Taylor one … “Go fucking block for him.” … Cam Newton has never heard of Ryan Tannehill before in his life.