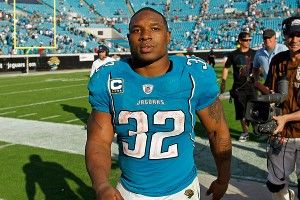 The Jags train is leaving the station. Or not. Whatever.

In the past 12 hours, yet-to-report Maurice Jones-Drew has gone from very upset about some of his new owner’s public comments to maybe not so upset anymore. Early Tuesday, Jags owner Shad Khan continued his cavalier approach to MJD’s holdout, telling the Florida Times-Union, “Train is leaving the station. Run, get on it.” This prompted Jones-Drew and his camp to tell reporters that in that case, the 2011 rushing champion would like to be traded. By this morning, most likely realizing that he and his client have almost no leverage, Jones-Drew’s agent had softened that stance.

For the past week, there have been plenty of conflicting reports on how close Jones-Drew was to a return. The feeling among Jaguars players was reportedly that they’d see him sooner rather than later. Others have said the sides remain as far apart as ever. Khan’s earlier comment that “on a zero-to-10 level of stress, [the MJD negotiation] doesn’t even move the needle” doesn’t mesh well with reports that GM Gene Smith and MJD have spoken often. Really, the whole thing just seems like a mess.

Jones-Drew appears to have two main factors working against him in these negotiations. The first is that although his $4.45 million salary in 2012 seems below market value considering the new deals for players like Ray Rice and Matt Forte, the last two years on MJD’s deal are a bit skewed by the contract being considerably front-loaded. Of the $30.95 million total, $17.5 million was guaranteed, including a $9 million signing bonus and his salary in the first two years.

The other is the regime change that took place in Jacksonville between this year and last. This is a team with a first-year coach, a first-year owner, and a second-year quarterback who struggled mightily in year one. The Jags can afford to be somewhat patient as they revamp their organization, and ripping up the existing contract of a 27-year-old running back who’s had almost 1,100 touches in the past three seasons is anything but patient.

Jones-Drew has already lost a reported $1 million in fines and forfeited bonuses by missing camp, and if the holdout continues into the season, he’s slated to lose a lot more. His agent has said that MJD has done the right things with his money and won’t be moved by financial concerns, but at some point, he’ll have to be moved by something. Rashad Jennings has looked good this preseason. MJD’s absence has allowed Blaine Gabbert’s leadership role to expand. In the end, it might have to be Jones-Drew who folds, because right now, Jacksonville doesn’t have a reason to.

Julio Jones is trying to save everyone some time. Asked earlier this week what he would do to defend him, Matt Ryan, Roddy White, and the rest of the Falcons offense, the second-year receiver was very considerate in response: “You know what I would do? Just pack up my stuff and go home,” Jones said. “I mean, who are you gonna double? Tony? Roddy? Me? That’s six people. What are you gonna do?”

Considering the preseason he’s had, it’s hard to blame the guy for being bullish on his team’s offensive potential. During stints against both Baltimore and Cincinnati, Jones was every bit the player Atlanta traded up for in the 2011 draft.

The only problem with Jones’s confidence is the talk from Falcons camp feels much like it did last season. Again, this is the season that Matt Ryan will show himself to be elite. This is the season that Atlanta will have the two downfield threats it never has. But looking at the roster, little has changed since they were shut out against the Giants in last year’s playoffs. Jones has a full offseason behind him, but the depth behind him still lacks. Michael Turner is another year older and still a no-show in the passing game. There have been plenty of highlights through two exhibition games, but at this point, the goal in Atlanta can’t be a bit of preseason excitement.

It’s been an eventful few weeks for Brian Urlacher. First, he missed the Bears’ first preseason game for personal reasons, or because he was resting his knee, or some combination of those two. It’s unclear. Then, he reportedly split with girlfriend Jenny McCarthy, who icily dropped the “We can still be friends” bomb in a press release. Now, the 34-year-old linebacker is dodging questions about whether he took a jaunt to Europe earlier this year for the famed Regenokine knee procedure championed by Kobe Bryant and others.

As Mike Mulligan wrote in the Chicago Tribune, the amount of time between Urlacher’s initial injury (Week 17 of last year) and his latest arthroscopic procedure on the left knee (less than two weeks ago) seemed a bit strange. It seems less strange if part of that time was spent seeking an alternative treatment, which Urlacher did, according to two sources. Unlike Bryant and others, it’s been in Urlacher’s best interest to remain quiet about the procedure, and it actually provides some interesting insight into the realities of athletes in each sport.

In a lot of ways, Urlacher and Bryant have led parallel careers. They are five months apart in age, have played for one franchise, and at one point or another have been the face of sports in two of the biggest markets in the country. And while Bryant and his 25 million fully guaranteed dollars can openly discuss his German vacations, Urlacher, in the final year of his contract, won’t bring up anything that might make his team or another think twice about his health.