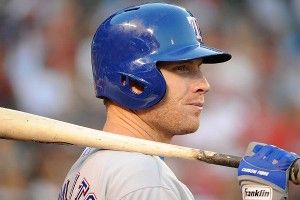 Jumping suddenly and aggressively into the fray, the Angels reeled in Josh Hamilton for five years and $125 million, delivering a sharp blow to the rival Rangers and further cementing the West divisions as the most compelling races for 2013.

Industry consensus had Hamilton ticketed for a return to Texas, given Hamilton’s supposed promise to the Rangers that they could match any competing offer and the lack of rumors signaling a megadeal from another team. But as the Angels swept in last offseason to grab Albert Pujols and C.J. Wilson at the end of the 2011 Winter Meetings, so, too, did they pull off a shocker here.

The Angels, who ranked fourth in the majors in runs scored for 2012, now project as the best offensive team in baseball for next season, at least at this stage of the winter. For all the dissecting of Mike Trout’s all-around game last season, he was a no-caveats offensive beast, ranking behind only Miguel Cabrera and Ryan Braun in Weighted On Base Average. After a terrible start to last season, Albert Pujols hit .312/.374/.589 from May 15 to the end of the season. Mark Trumbo is one of several Angels hitters who couldn’t draw a walk if his life depended on it, but he’s a major power threat, socking 32 homers in 144 games in 2012. The Halos did lose Torii Hunter to free agency (and made an enemy in the process). But a healthy Chris Iannetta for a full season, Kendrys Morales’s brutal ankle injury yet even further in the past, and Hamilton’s acquisition would make this a dominant hitting team, one that offers no real breaks in the lineup, with an obscenely great top five if Mike Scioscia comes to his senses and drops Erick Aybar to the bottom of the order.

Hamilton is no sure thing. We covered his risk factors earlier today: This contract covers his age 32 to 36 seasons, and most players tend to peak before they hit 30; he’s struggled with injuries, with 2012 marking the first time he’d played more than 133 games in four years; he’ll add another lousy batting eye to a lineup with several of them; and you have to at least mention a history of substance abuse when discussing risk. He’s also likely to take a sizable hit in moving from Arlington to Anaheim. Per the excellent analytics site StatCorner, here are the two parks’ three-year park factors for left-handed hitters (a mark of 100 means average, so higher numbers mean above-average figures, lower are below average):

On the other hand, the Angels are paying half as much for Hamilton (in both years and total dollars) as they did for Pujols a year ago, despite both players coming off similar age-31 seasons right before they signed. You live with the swing-at-everything approach, because Hamilton is from the Vladimir Guerrero school of pummeling almost everything that moves, including pitches off the plate. And assuming we go by longer track record and not one year’s worth of data, he’s still a plus defender as a corner outfielder, with above-average baserunning skills, at this stage of his career. As for park factors, it’s all relative. That Angel Stadium is so harsh on offensive numbers only underscores how impressive the 2012 club’s output was, and how impressive the 2013 team’s could be. And if the park hurts Angels hitters, it also helps Angels pitchers.

Which is great, because they could use all the help they can get. Zack Greinke’s short drive up I-5 to the 110 robbed the team of a front-line starter. Dan Haren’s departure to Washington certainly didn’t help, but subtracting Ervin Santana’s awful 2012 campaign surely would, especially if the Angels landed some big-time pitching talent to take his place. To date, they have not. Joe Blanton on a cheap, two-year deal is fine for this market, and Tommy Hanson represents an intriguing roll of the dice. But Blanton is fifth-starter material, and Hanson’s arm is a ticking time bomb. The Angels have dramatically improved their bullpen from where it was on Opening Day 2012, with next year’s relief corps featuring excellent lefty (Scott Downs and Sean Burnett) and righty (Ernesto Frieri and Ryan Madson) combinations in play. But the rotation’s screaming out for another high-quality arm to back Jered Weaver and C.J. Wilson.

R.A. Dickey might’ve seemed a logical fit, given that the Mets reportedly have been dangling him in trade while lowballing him on a contract extension. But Newsday‘s ace Mets reporter Marc Carig reports that the Mets have no interest in a Dickey trade with the Angels, at least not for either of the two most obvious candidates. Those two players are Trumbo and Peter Bourjos. Both have struggled to get on base, but both also offer impressive skill in other areas: Trumbo as one of the best power threats in the league and Bourjos as a speed demon who’s also a preposterously amazing gloveman in center field. If the Mets don’t want either of those players, the Angels could always call the Phillies (who have no faith in Domonic Brown and want another outfielder, even after trading for Ben Revere); the Rays (who might still have some pitching depth to spare even after the James Shields–Wil Myers blockbuster, and could sorely use another bat); or the Cubs (who need … well … a lot).

For now, we’re left with an Angels team that’s going to be must-see TV every time they flip to the top of the order, one that’s made several upgrades but also a couple of downgrades from last season’s 89-win club. We have a Rangers team that now figures to either double down on Dickey trade talks, make a spirited run at Anibal Sanchez, make themselves the front-runners for Michael Bourn, Nick Swisher, or Adam LaRoche, or many of the above. And let’s not forget the upstart A’s, who shocked the baseball world by winning the division last year and could see further improvement from several young players this year. Between that race and the battle between the defending World Series champion Giants and the shoot-the-moon Dodgers, get ready for some serious West Coast bias next season.