Halladay’s Back, But Is There Hope for the Phillies? 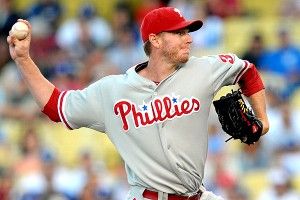 1. Roy Halladay returned from a back strain last night to pitch five solid innings in a 3-2 Phillies win over the Dodgers. In only 80 pitches, he managed six strikeouts and seven swinging strikes. His fastball wasn’t very lively (he threw the cutter and the two-seam a combined 52 times, producing zero whiffs and topping out below 92 mph), but since the injury wasn’t to his arm, the velocity of the two-seam in particular should go up as he gains strength.

2. His return is a huge relief for the Phillies, especially considering Kyle Kendrick’s ineffectiveness filling Halladay’s spot in the rotation. With Kendrick out, Philadelphia’s rotation might finally be rounding into shape. The other “weak link,” Joe Blanton, has had good outings in four of his last six, and Cliff Lee, despite his 1-6 record and an unusually high ERA, is still the eighth-best pitcher in baseball by FIP. He showed what he was capable of in an eight-inning, nine-strikeout gem against the Mets on July 4, and his season is ready to turn around at any moment. With Cole Hamels and Vance Worley pitching well, the Phils’ rotation seems to be on its way back.

3. With 389 runs scored, the Phillies are actually in the top half of productive offenses in the National League. It hasn’t been a banner year, but Ryan Howard and Chase Utley are finally back after spending the bulk of the season on the DL. The offense should only get better from here.

1. The bullpen is beyond cursed. It’s been a nightmare season of bad news and bad results for the relievers, and the collective ERA is now 4.78, second in futility only to the Mets. The laundry list of injuries to the pen reads like a Russian novel, and it’s only gotten worse with time. Justin De Fratus, a strong minor league reliever expected to contribute to the big club in 2012, went down with an elbow injury before the year began. David Herndon, one of last year’s best Phillies relievers, hurt his elbow in early April and is out for the year after undergoing Tommy John surgery. Michael Stutes, who had a 3.63 ERA in 62 IP last season, has been out with shoulder inflammation since April and may be gone for the year. Jose Contreras had started to pitch very well by the end of May before going down with a season-ending injury to — you guessed it — his elbow. If that weren’t enough, Raul Valdes, one of the few bright spots for Philly this season, is now on the DL with a strained hip.

That leaves Jonathan Papelbon (who’s been effective, with 21 saves in 23 opportunities) and a slew of replacements who aren’t doing the job.

2. Their hole in the standings is deep. The addition of a second wild-card team to this year’s playoff format helps, and so does the fact that both wild cards can come from the same division. But the Phillies would have to best teams like Pittsburgh, St. Louis, Cincinnati, and Los Angeles, all of whom will be fighting for their own wild cards in the Central and West. At the moment, Philadelphia is 9½ games back from the second wild-card spot, and there are seven teams to climb before they get there. With 92 games in the books, they have 70 left to make their move, and a bulk of those games are against the best division in the National League. It’s not impossible, but it’s not quite likely either.

Still, there is, at long last, a glimmer of hope in Philadelphia. Starting pitching and offense are indisputably on the rise, and there may be an emerging bullpen bright spot in Jeremy Horst, who has tallied 5⅓ scoreless innings and seven strikeouts since his contract was purchased from the minors on June 28. Valdes should be back in a couple weeks, and the Phils hope Kendrick will be better in relief than he was as a starter. Of the four primary team elements — offense, defense, starting pitching, and relief pitching — the bullpen is always the most fickle, and most prone to a lucky turnaround. Maybe they’re due for some good luck after all the bad.

If it’s been strange to watch the Phillies struggle after all their recent success, take solace in the coming reprieve. They may not climb that playoff mountain, but the darkest hour is finally over, and good baseball is on the horizon.