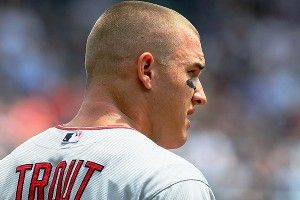 NEW TOLEDO, OHIO TERRITORY, NEW EARTH, April 28, 3012 — All the dignitaries were there to witness Two Saints Day. Robothal v297.0 recorded all the pageantry with its trademark bleeps and bloops. Giving the keynote speech was Ted Williams’s Unfrozen Head, Emperor of New Earth.

“We are here today to celebrate the birth of the Golden Age of Man,” said Ted Williams’s Unfrozen Head. “On this blessed day, 1,000 years ago, the Chosen Ones first toiled at their craft together. And lo, doth the world remain in their debt, then and forever more.”

It was a blessed event, a celebration of the day Mike Trout and Bryce Harper made their debuts as full-time players together in Major League Baseball. The Chosen Ones both won Rookie of the Year honors that season. More than that, they unleashed a worldwide revolution, one that would bring peace, harmony, and prosperity to the planet until the end of time.

Standing on the podium, beaming with pride, was Major League Baseball Commissioner Allan Huber “Bud” Selig. Looking spry at the tender age of 1,077, the Commissioner reveled in the glory his game had brought to the world. Addressing the throng, he extolled the virtues of Saint Michael and Saint Bryce, and the everlasting joy that emanated from their holy spirits. Thanks to the Saviors, Bud Selig had earned the undying admiration of all living creatures. No one, anywhere, had a better job. And he knew it.

“Next year,” the Commissioner said with a wink, “I might even retire.”

Few pairs of rookies have ever wielded as much talent, or hype, as Mike Trout and Bryce Harper. If a Bill-and-Ted-like utopian existence seems far-fetched (and other than Bud Selig holding on to the commissioner’s job 1,000 years from now, of course … that’s a mortal lock), consider the hosannas that have been hurled their way less than three months into their big league careers.

Torii Hunter, on Trout: “He’s Rickey Henderson in the making.”

SI‘s Tom Verducci, trying not to make these Harper comparisons and failing: “Golf has Tiger Woods, basketball has LeBron James, hockey had Wayne Gretzky and military history had Alexander the Great.”

Hall of Famer Al Kaline, on Trout: “He’s a strong guy, runs really well, power — he reminds me a little bit of a Mantle.”

Comparing 19- and 20-year-old rookies to three of the 20 greatest baseball players of all time is wildly premature, of course. Plenty of phenoms have flamed out early, and 11½ weeks of results can’t begin to predict a Mickey Mantle future, no matter how impressive those results might be.

Still, even the biggest sample size curmudgeon can’t deny the potential that Trout and Harper possess, given their ages, skill sets, scouting reports, and, yes, the numbers they’ve put up this year. Harper has hit .275/.347/.457, filling a huge would-be hole in the Nationals’ first-place lineup. Trout has been on another level. After banging out four hits Tuesday night, he’s now .355/.408/.582, leading the AL in batting, leading the majors in steals, playing a Gold Glove–caliber center field, and, if you believe Wins Above Replacement, establishing himself as the most valuable player in the league despite playing in only 69 games. More than mere stats, both players’ flair for the dramatic have captivated the baseball world’s imagination. Do this and this as often as Harper and Trout have, and the crazy comps are going to flow, like it or not.

We might not be able to do a hard ranking of these two rookies versus some of the other all-time-great rookie pairings, at least not until more time has gone by. But we can at least see what Trout and Harper are shooting toward. Already this year’s rookie class has set one record: landing the most freshmen ever in the All-Star Game. Those five players: Trout, Harper, Yu Darvish, Wade Miley, and Ryan Cook. Of course, All-Star rosters are bigger than ever before, and Miley and Cook might owe their All-Star berths to the one-per-team rule more than anything else. And that quintet doesn’t include Lance Lynn, the Cardinals starter and 11-game winner who leads Harper and all other NL rookies in WAR. So what are they up against?

We can start with the mega-rookies. Only two players in MLB history have ever done what Trout is vying to do: win Rookie of the Year and MVP in the same season. In 1975, Fred Lynn helped push the Red Sox to the World Series, hitting .331/.401/.566, leading the league in doubles, runs scored, slugging average, and OPS, and winning a Gold Glove in center field. He was even better four years later, mashing .333/.423/.637, with 39 homers and best-in-the-league honors for batting average, on-base percentage, and slugging average. But Lynn was merely a good-to-very-good player otherwise, succumbing to injuries and posting just one five-win season throughout the rest of his career. In 2001, a 27-year-old Ichiro Suzuki hit .350, banged out 242 hits, caught everything remotely in his vicinity, and terrorized base runners with his rocket arm, collecting both awards. Since that museum in Cooperstown is known as the Baseball Hall of Fame and not the Major League Baseball Hall of Fame, one hopes that Ichiro’s multiple years of elite performance in Japan will be considered when his name comes up for potential induction; if he’d cracked the majors a few years earlier, we might be talking about close to 3,500 hits and 1,500-plus runs scored.

Stopping at Trout and Harper and trying to do one-on-one comps with the likes of Lynn and Ichiro might not be the right approach, though. The excitement brewing in baseball revolves around an entire class of 25-and-under players. Giancarlo Stanton emerging as a Paul Bunyan–level power hitter at age 22. Jason Heyward starting to put it all together, also at 22. Chris Sale striking out the world at 23. Stephen Strasburg threatening to become the best pitcher on the planet two days shy of his 24th birthday. Clayton Kershaw’s already put up four years of Strasburgian numbers and he’s just 24. Andrew McCutchen’s evolving into the best player in the game this year, hitting .374 and going on a ludicrous power binge at age 25. And on and on. There’s a false narrative floating around about declining interest in baseball; in fact, attendance is rising, surging TV ratings are fostering gigantic new revenue streams, and teams are minting money. But there are always more fans to be captured, including casual fans turned off by the PED scandals of the aughts. In the same way that the 2003-04 NBA season brought an influx of rookies and young talent that redefined a league that needed a reputation boost, so, too, could baseball’s under-25 set push the sport’s mainstream narrative in a thrilling, new direction.

By expanding our query to players 25 and younger, we can check in on multiple eras to see what Trout, Harper, & Co. are up against. Thanks to Baseball-Reference’s Play Index, and with an assist from ESPN Stats & Info’s Mark Simon, we find five different years in baseball history where 14 24-and-younger future Hall of Famers were playing at once: Every season from 1923 through 1926, as well as 1956. Going by that standard gets tricky, though, since some of those players went on to make the Hall of Fame as managers. Using hunt-and-peck tactics, we can pinpoint some of the best 25-and-under generational boomlets of all time.

Two seasons stand out from that decade.

In 1984, future Hall of Famers Tony Gwynn, Cal Ripken Jr., Ryne Sandberg, and Kirby Puckett were all on their way up, as was Tim Raines, a player who clearly deserves to be enshrined. In terms of sheer electricity, the marquee player that year might’ve been Dwight Gooden. A hybrid of Harper the teenage sensation and Strasburg the unhittable pitching phenom, Gooden was a 19-year-old rookie who struck out 276 batters, posted the lowest hit and home run rates in the leagues, and nearly paired a Cy Young award with his Rookie of the Year, finishing second in best pitcher honors to Rick Sutcliffe despite throwing 68 more innings than the in-season, league-switching veteran.

1987 was even more loaded. One of the three best hitters (Barry Bonds) and one of the three best pitchers (Roger Clemens) ever were both just getting started. So was future Hall of Fame shortstop Barry Larkin, in-if-not-for-won’t-somebody-think-of-the-children-rationale Mark McGwire, and Hall of Nearly Great first baseman Fred McGriff. Given everything that went down with Bonds and Clemens, Trout and Harper have a chance to surpass both players on the beloved scale, even if putting up comparable numbers is nearly impossible.

1974 is a bit of a cheat, since future Hall of Famers Gary Carter and Jim Rice were up for little more than a cup of coffee. But Mike Schmidt and Dave Winfield had already established themselves as marquee players, George Brett and Robin Yount had won everyday jobs, and Bert Blyleven and Goose Gossage were both starters in the big leagues. That’s eight Hall of Famers, including, depending on how you handle A-Rod, the best or second-best third baseman of all time.

1967 and 1969 blend together given the crossover between several of the big names. The ‘67 season was particularly noteworthy, since Tom Seaver, Johnny Bench, Reggie Jackson, and Rod Carew all made their major league debuts that year, though Carew was the only one of the four to play a significant number of games. By 1969 that quarter was in full bloom, with Bench on his way to becoming the greatest catcher of all time, and a passel of all-time pitching greats on the rise, led by Jim Palmer, Don Sutton, and Catfish Hunter, with Nolan Ryan and Steve Carlton starting to feel their oats. Granted, one of the greatest sets of playing conditions ever for pitchers was bound to produce some impressive pitching numbers. Still, you can only explain away so much Palmer, Ryan, and Carlton before admiring three of the greatest to ever throw the ball.

For sheer volume of greatness, 1955 might be it. Under-25 everyday players included Hank Aaron, Willie Mays, Mickey Mantle, Roberto Clemente, Ernie Banks, Al Kaline, and Eddie Mathews, while Harmon Killebrew and Frank Robinson were starting out. Yikes. Young pitching stars were scarcer, though future Hall of Famer Early Wynn fit the bill. There was also a terribly wild, 19-year-old lefty just getting his feet wet. It would be six years before he’d have his first great season. But anytime you can include Sandy Koufax on any list like this, you just do it. Unless Yoenis Cespedes is the next Clemente and Todd Frazier the next Mathews, you’re not touching this group.

Arguably only three biggies. Of course, those three were Ted Williams, Joe DiMaggio, and Bob Feller. If 20 years from now you can so much as say the names Bryce Harper and Mike Trout in the same sentence as Ted Williams and Joe DiMaggio, you’ll know you’ve found two all-time icons. Even if they never quite achieve messiah status.