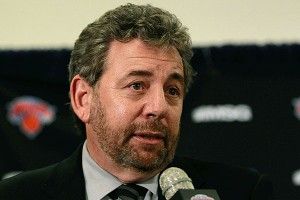 Back in August 2010, Bill Simmons wrote a column with four theories in it. One of them tried to explain the phenomenon of James Dolan, Terrible Sports Owner. Here’s what he wrote.

When the news broke that Isiah Thomas might be rehired as a Knicks consultant, a New York buddy sent me the following e-mail: “Serious question: Do you think there is something wrong with Dolan? What if it turns out he is mentally ill? Or what if doctors diagnosed a significant social disorder? Do you think Stern would give us our 2012 no. 1 pick back?”

My answer: There’s nothing wrong with Dolan. We’ve seen terrible owners before. Nobody was worse than Ted Stepien. Nobody shredded the size of a team’s fan base faster than Peter Angelos. Nobody has inflicted more damage over a longer period of time than Donald Sterling (not even you, Mike Brown). More recently, William Clay Ford and Al Davis sucked the life out of their fans in unprecedented ways. But Dolan’s reign of terror is different for this reason: He doesn’t seem to understand (or care) that his fan base regards his every decision with genuine terror.

Here’s a fun trick: If you know a Knicks fan, go up to him and ask, “Did you hear about Dolan?”

His response, guaranteed: “Oh, no!”

He won’t say “Oh, no, what did he do?” Or “Did we make a trade?” Or even “Is he selling?” You asked about Dolan; that means something bad happened. Oh, no. It’s a natural instinct when you assume the absolute worst at all times.

After 10 years, you’d think Dolan would have caught wind of this. Maybe read a few scathing columns, heard a few biting radio rants, had a few unpleasant encounters with fans … and, at some point, would have thought to himself, “God, I’m really bad at this, they hate me, I should sell or get help.” Maybe nine solid years of losing would have alerted him. Maybe the booing would have tipped him off. Or the empty seats. Or LeBron and Wade fleeing in the other direction. Something. But either it bounces off him, he’s mired in abject denial, he doesn’t care what anyone thinks, or he’s the least self-aware person who ever owned a major professional sports team.

My theory: I think it’s the latter. Isiah’s aborted re-hiring — really, one of the five or six worst ideas in sports history, as well as the quickest way an owner could antagonize his beleaguered fan base short of just turning a fire hose on them — came from a semi-understandable place. Dolan sees himself as an underdog who’s been dumped on his whole life, so he identifies with anyone else fitting that category, even if it’s a failed sports executive who turned his team into a laughingstock. Still, Dolan’s low level of self-awareness can only be compared to little kids. For instance, when we take my 3-year-old to the beach, he takes his clothes off, refuses to put on a bathing suit, then walks around showing everything off for two hours. He doesn’t do this maliciously; there’s nothing wrong with him. He’s just a little boy. He’s incapable of feeling awkward or being uncomfortable.

Same for James Dolan. Although you can’t say he doesn’t care. Dolan’s volatile temper has been his signature trait. His employees usually leave on bad terms. He’s battled so many people over the years — including the mayor of New York, his brothers and his father — that New York magazine once centered an entire profile on that theme. Once fortune turned against the Knicks, Dolan instituted a bizarre media embargo that had employees creeping around in terror like their clothes were bugged. When New York tabloids raked him over the coals during the Anucha Browne Sanders trial, Dolan stubbornly refused to fire the flailing Thomas. He’s obstinately loyal to a handful of people and impossible with everyone else. (One person who worked with Dolan told me, “He doesn’t just belittle people. That’s too soft of a word. ‘Humiliate’ is more like it.”) And when all else fails, he throws a tantrum. Again, sounds like my 3-year-old son.

Why is Dolan like that? Attend prep school or private school for a few years (I did five) and you’ll meet a few legacy kids along the way. They can go one of three ways:

A. Driven to follow Dad’s footsteps and become just as successful (if not more).
B. Want no part of Dad’s footsteps, would rather create their own.
C. Knew their parents would always provide for them, and become screw-ups.

You could sniff out Group A as early as the ninth grade; we knew which ones had their heads on straight and were headed somewhere. Group C was my favorite: lazy and entitled, headed nowhere, but always throwing great parties because their parents were never home. I never blamed the Group C kids for being like that; their parents were usually too busy to care, so they enabled their kids, looked the other way and made excuses for them. But the Group B kids … they were the fascinating ones. They talked a big game, stuff like, “I’m gonna be a teacher,” or “What really matters to me is my music.” Sometimes they paved their own way and made it; sometimes they didn’t. If they failed, either they stayed failures (belatedly moving into Group C), or sucked it up, swallowed their pride and joined forces with Dad.

James Dolan juggled Group B and Group C. Instead of going to college, he pursued a music career (Group B). When it didn’t work out, he left two colleges before belatedly getting his communications degree from SUNY New Paltz (Group C). From there, he begrudgingly went to work for his father (Group B) and battled significant drug and alcohol problems (Group C), and then, to his credit, overcame those problems in his 30s. He sailed competitively (classic Group B) before quitting the sport in a rage (ditto), formed his own jazz band and named it “JD and the Straight Shot” (double ditto), then used (and continued to use) his vast resources to give himself every competitive advantage (triple ditto). New York magazine reported that Dolan even “bought a house adjacent to his own in Oyster Bay, converting it to a studio and arranging for band members to fly in on the Cablevision helicopter for practice.”

Everything will make sense when you watch JD and the Straight Shot perform. It’s the entire Dolan package on display: the entitled legacy kid who formed a band, overpaid the other members since it’s the only way they would EVER play with him, thinks he’s good and isn’t self-aware enough to know otherwise (as this damning interview/song shows). Knicks fans wonder why their franchise careened into NBA hell, why LeBron ran in the other direction, or why anyone could ever think it would be a good idea to re-hire Isiah again? Watch that video while ignoring the unintentional irony of the chorus being, “If you can’t lie no better than that, you might as well tell the truth.” That guy owns the New York Knicks and New York Rangers. He does.

Legacy kids can succeed or fail as sports owners like anyone else, but one thing sets them apart: They inherited their opportunity with, in some case, no real credentials at all. Let’s say I retired in 20 years and turned this column over to my son, but he couldn’t write and didn’t know anything about sports. You would think this was weird. You would make fun of him. You would say, “Why the hell would ESPN employ Simmons’s son, isn’t this the strangest thing ever?” In the business world, it’s par for the course. It happens all the time. As the old saying goes, James Dolan was born on third base and thought he hit a triple.

So when you hear stories like, “When the Knicks finally had their sit-down with LeBron, Dolan started the meeting by reading awkwardly from prepared notes, exactly like Luca Brasi congratulating Vito Corleone at his daughter’s wedding” (and by the way, that’s 100 percent true), really, you can’t be surprised. This isn’t any different than the kid in your neighborhood who took over his dad’s hardware store — the one that’s been in town for 60 years, the one that everyone loved — and ran it into the ground. The Knicks are that hardware store. I hate to break it to you. People keep expecting that Dolan will get the hang of owning the Knicks. It’s never going to happen. Next time he does something inexplicable, think of him wobbling naked toward some unsuspecting beach couple with a big smile on his face. It will all make sense. Then again, it’s just a theory.