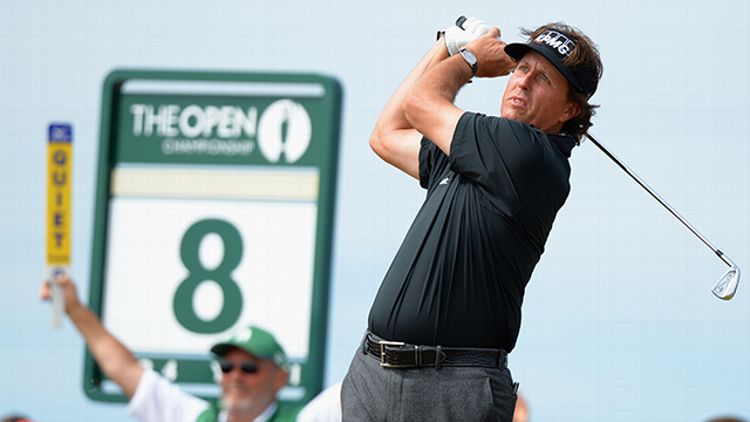 Don’t you hate those people who get all sentimental about the British Open, just because golf was born in Scotland and the windy, damp, overcast atmosphere of the year’s third major harks back to that romantic era when shepherds tending their flocks would take a moment to hack away at the feather-filled leather balls buried in the thick fescue off the coastal sand dunes?

Then you came to the wrong place, because I’m one of those people, and the British Open is my favorite major. I’m about to get real corny on you, but there’s something spiritually satisfying about the Open Championship that is missing everywhere else. There are philosophical differences between the three American majors (snooty, democratic, and inferiority complex, in that order), but the British Open is the only physically unique major. It’s a departure from the manicured greenery of the States and a return to the rugged links golf of the sport’s origin. This year’s host course, Muirfield, overlooks the Firth of Forth and subjects the players to the harsh winds we’ve come to expect from these venues. A premium will be placed on low ball flight (thus avoiding the worst of the winds), straight drives (thus avoiding the miserably thick rough and treacherous pot bunkers), and the ability to stave off the one-hole disasters that can pierce your balloon of hope. Ernie Els won the last Open at Muirfield, in 2002, with a score of -6, but the scores of past winners show that if the weather is mild, negative double digits are on the table. But who goes into a British Open expecting mild weather?

The punters in Scotland have made Tiger Woods the odds-on favorite to win, but trusting the wisdom of crowds will only break your heart. Instead, read on for the July power rankings, and the 10 men capable of winning at Muirfield.

The 19-year-old Spieth broke through last week to take the John Deere Classic for his first career win, and it wasn’t easy — he had to do this on the 18th hole to force his way into a playoff:

His youth made waves in the golf world — he was only the fourth teenager to ever win on the PGA Tour, and the first since Ralph Guldahl in 1931 — but the fact is that Spieth isn’t a novelty act. He’s already made more than $2 million on the PGA Tour this year, he has six top 10 finishes, and he nearly won the Puerto Rico Open in March. The young fella is the real deal, and you can’t count out the golfer coming into Scotland riding the high of his first win.

Three facts. First, Els won the BMW International Open in Germany less than a month ago, so his form is good. Second, he’s the last guy to win at Muirfield, in 2002. Third, he’s the defending British Open champ, having backed in to the Claret Jug last year by virtue of Adam Scott’s collapse. How can you leave the Big Easy off the list?

Great golfer, bad choker. Earns his spot by virtue of a strong season, but be real wary of expecting him to pull through under pressure.

I’m sticking by Kuchar, come hell or high water. I watched him take down the entire field at the Accenture Match Play Championship in February, and I know the guy’s tough. I know his major is coming. I also know that he’s 35 and entering his prime and has five top-10 finishes in majors since 2010. It would be ridiculous if he somehow ended his career without winning the big one, but I guess I should own my anxiety here and admit that I’m starting to doubt him. But I’m not abandoning the Bald Train, especially when he just won at Memorial, proving yet again that other than Tiger Woods, there’s nobody more consistent on Tour.

Day is 25, but doesn’t it feel like he’s been involved in the Sunday drama at every major tournament for the past decade? He’s not far off — in the last 11 majors, he’s been in the top 10 five times, and the TOP THREE an insane four times. I have no idea if he’s ready to win a major — the guy only has one professional win, and that was in 2010 at the Byron Nelson — but the guy steps his game wayyyyy up when the stakes get high. He’s had a nice, steady year on the PGA, earning himself a cool $2.6 million, but if you look at the highlights, you see a pattern: third at the increasingly illustrious Accenture Match Play, third at the Masters, second at the U.S. Open. Whenever you up the ante, Day gets involved.

Hot Factor: Sitting in a Bar, Telling People About the Time He Won the Masters Hot

Scott won the Masters, and then he became Tiger Woods. Just like Tiger, he’s only played nine events on the PGA Tour this year. Just like Tiger, he only seems to show up for the high-profile events, rarely even bothering with a warm-up tourney. Just like Tiger, he’s won a lot of money. Unlike Tiger, though — and this is an important point — he’s not Tiger Woods. Since winning the Masters (his first major, compared to Tiger’s 14), he played in the Players Championship, the Memorial, the U.S. Open, and the AT&T National. He’s gotten progressively worse. And maybe he has a really good reason, but it seems almost a little arrogant. Shouldn’t he be working hard to capitalize on the win and winning more tournaments so he can surge up the rankings? In any case, winning the Masters counts for a lot, and as we saw last year, before the massive four-bogey choke, he’s more than capable of playing well on the Links.

Hot Factor: Everywhere But Where It Matters Hot

I get really annoyed by the nonstop “Is Tiger back?” question, because all the numbers point to the fact that the guy is the best golfer in the world. He’s won more tournaments and more money than anyone else in 2013, and he’s ranked no. 1 in the world! But golf is a sport that the majority of us only care about during the majors, and I’ve slowly come to accept that maybe it’s not totally ridiculous to judge him — at least somewhat — on how he performs in the four premier events. Because there are two ways to define the word “back.” Tiger is assuredly back as the best golfer in the world on a weekly basis. But we know Tiger Woods as more than that; we know him as the guy who won majors, decimated entire fields, and wreaked psychological havoc on anyone who dared to challenge him on the biggest stage. And until he wins a major … god, it pains me to say this, because I’m about to throw a bone to the type of thinking propagated by the sports industrial complex’s lowest common denominator — but yes, I have to concede that the old Tiger isn’t “back.”

Hot Factor: Monkey Off the Back Hot

I’m not going to sit here and compare Rose’s U.S. Open win to Andy Murray’s breakthrough at Wimbledon or anything, but the fact is that it had been a really long time since England had produced a major winner in golf, going back to Nick Faldo’s Masters win in 1996. Not only did Rose end his campaign for the dreaded “Colin Montgomerie Best Golfer Without a Major” title, but he freed a country from the escalating murmurs about its futility in what is more or less a native sport. By winning at Merion, he took an enormous psychic toll off his shoulders. He looked solid at the Travelers Championship in his only outing since the big win, and there’s no reason he can’t exceed his previous best finish at the Open, when he finished fourth as the low amateur way back in 1998.

Besides Tiger, McDowell is the only guy with three wins this season, but what’s really remarkable is the feast-or-famine road he’s taken to that success. In eight starts on the European Tour, he’s had two wins, two more top-5 finishes, and four cuts. On the PGA, it’s five top 10s and four cuts in 10 starts (some of those overlap). It’s really rare to see those kind of results stacked together in a single year, because a golfer’s form tends to be consistent, good or bad. You won’t often see someone vary from week to week like McDowell has, and it leads me to believe he’s either going to win at Muirfield or spend two days mired in pot bunkers before stalking off home to Northern Ireland. McDowell is a sexy pick this week, though, because he’s coming off a win at the French Open and has that coveted low ball flight that plays so well in the rough Scottish winds. If we get Good Graeme, a top-five finish seems like a done deal.

Hot Factor: I PUT IN THE DAMN HOURS!!! Hot

I tend to get sick of Mickelson’s smiley, gee-whiz act, and the Cult of Phil that follows him around at every American tournament is somewhere on the spectrum between obnoxious and nauseating. But even I have to admit that the loss to Rose at the U.S. Open was really, really brutal. He spent an entire career suffering at that event, and this was supposed to be the moment of redemption. Instead, it was another second-place finish (his sixth, which is just insane) to add to the Rolodex of awful memories. I felt for him, and I respect how he bounced back. It didn’t surprise me at all that he played the Scottish Open last weekend to prepare for Muirfield, and it didn’t surprise me that he won in a playoff. That’s what Phil does, because he’s a consummate golfer and a consummate pro, even if he is a bit of a lunatic. He has been so good and so consistent for so long that it would be a shame if he never won a British or U.S. Open. The guy deserves it, and even though there’s no such thing as a lifetime achievement award in the majors, I think the golf gods will reward him for his suffering this weekend with a Claret Jug.

Note: A previous version of this post incorrectly listed Paul Casey at no. 8. Casey is not playing in the British Open; Brandt Snedeker has replaced him in our rankings.