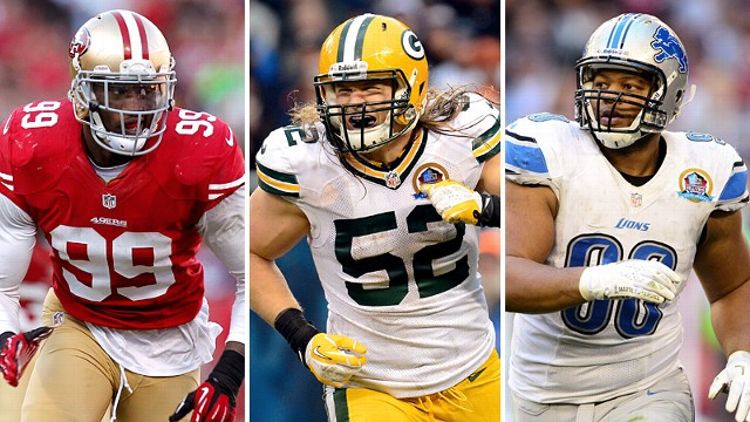 Earlier this morning, I wrote about how Cameron Wake remains the league’s most underappreciated great pass rusher. Because I’ve got great sack artistry on the mind, I decided that today would be the perfect time to get excited about the rest of the league’s best rushers.

No player has ever had more sacks in his first two seasons combined than Aldon Smith’s 33.5. Smith benefits greatly from playing next to fellow Smith and fellow Missouri Tiger Justin Smith, as we saw during Aldon’s sack drought when Justin missed time at the end of last season, but there’s no denying that he’s one of the elite young pass-rushing talents in the league. The speed is obvious; what’s surprising about Smith is the power. He weighs in at 258, but he doesn’t look it. Watching him drive opposing tackles straight back into the quarterback still catches me off guard.

For much of last season, it looked as if Smith would break Michael Strahan’s single-season sack record — until that drought mentioned above. He says he’s not too beat up about it, which is understandable. He’s 23 years old. My guess is that he’ll tally a few more as we go.

Despite the rise of the Class of 2011, Ware remains the NFL’s pass-rushing king. The second-fastest player ever to 100 sacks, Ware hasn’t had a single-digit sack season since his rookie year. We’ll have more on Ware in this space next week.

In baseball, there are certain stats that are good indicators of eventual improvement or regression. If a player has a batting average on balls in play figure significantly higher than average, it’s likely the player has had some very good fortune, and his performance will probably tail off. For pass rushers, the math isn’t as cut-and-dried, but there are also numbers that are telling in terms of future performance.

In 2010, Clay Matthews had 13.5 sacks. It was his second double-digit sack performance in as many seasons, and he was again off to the Pro Bowl. When Matthews’s sack total dipped to six in 2011, everyone was clamoring for an answer as to why. A common — and very serious — theory was that Matthews was doing too many commercials.

The truth is that the answer to “What happened to Clay Matthews?” is “Nothing.” Matthews didn’t get home nearly as often two seasons ago, but the other numbers were still right where you’d expect them. Matthews led the league in quarterback hits with 23, according to Football Outsiders, and was 13th in hurries. When Matthews had another 13-sack season last year, the thought was that all had returned to normal, but Matthews actually had nine fewer quarterback hits than he had in 2011. The difference between taking a quarterback down with or without the ball is immense in how it affects the game, but minuscule in terms of timing. Generally, sack numbers will come for the guys consistently around the quarterback, and that’s where Matthews spends a lot of his time.

Morgan is poised for the type of sack-total jump Matthews had last season. The 24-year-old defensive end was third in quarterback hits and sixth in quarterback hurries last year, according to Football Outsiders, but had just 6.5 sacks.

Many of Morgan’s pressures come after a secondary move or when chasing a quarterback from the pocket. With some players, this can be construed as a bad thing, a sign that their sack total is more a product of what’s going on around them than the disruption they’re causing individually. Watching Morgan, it’s easy to spin that into a positive. He’s consistently aware of where the quarterback is moving and when, and it allows him to time his movement back inside after initially coming off the edge. He’s a strong, quick rusher who should only get better with a bit more experience.

Whether it was the Lions’ disaster of a season or Suh’s propensity for doing stupid shit, conversations about him seem to include more uses of “discipline” and “dirty” than “dominating” and “viciously, utterly terrifying.” Suh had what many considered to be a down year in his second season, but all the controversy aside, he was great again in 2012. His 22 quarterback hits were behind only what J.J. Watt put up last year, and Suh and Geno Atkins were the only two defensive tackles in the top 10 for both knockdowns and hurries. Suh is a pocket-collapsing nightmare who has the strength to implode the middle of an offensive line and the quickness to beat guards one-on-one. With Nick Fairley’s emergence, the Lions should have the best interior pass-rushing duo in football for some time.

Put Allen in the same category as Ware. He hasn’t had fewer than 11 sacks since 2007, and his career total of 117 is 16th all time. He has 5.5 more than Julius Peppers, despite playing two fewer seasons. Allen needs just 25 more to pass Michael Strahan for no. 5 on the all-time list. Allen wasn’t the same player last year he was during his 22-sack season in 2011, but he was still in the top 10 in both knockdowns and hurries, according to Football Outsiders. Simply put, he belongs in any conversation about the best pass rushers of the past decade.

Far down the list of stars returning from ACL injuries this year will be Clemons, who was again a pass-rushing monster last year. He ranked in the top 10 in hits, knockdowns, and hurries, all while turning 31 last October. His return to health will be important for Seattle, even with the offseason additions of Cliff Avril and Michael Bennett. Most importantly, Clemons has taken the spin move championship belt long held by Dwight Freeney. I fully understand I am the only person in America who cares about that.

Let’s wait until tomorrow to give Miller his own Warning spot. He’s earned it.