From Ben to Derek: The Adam Scott Character Credit To/Stain Upon Humanity Spectrum 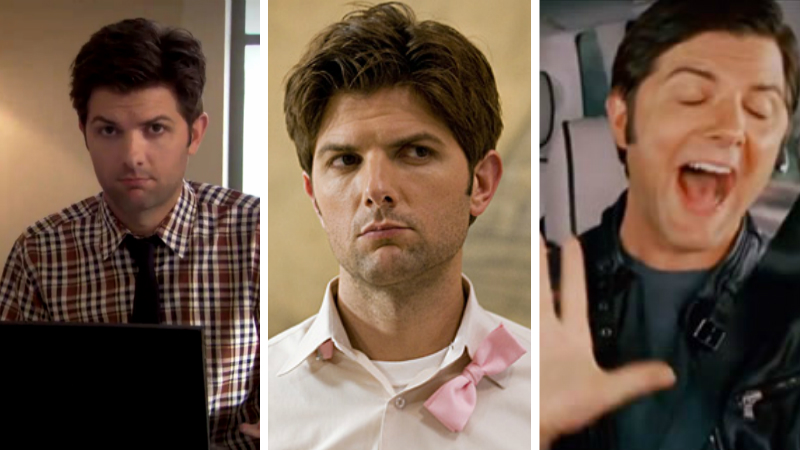 Adam Scott has now been a working actor for more than 20 years, even if he’s only been a recognized star for the past five. Looking over his many film and TV credits, the roles that really stick out are the ones where he plays either the purest-hearted nice guys or the worst garbage that the universe has ever spat into existence.

Scott joined the cast of Parks and Recreation in 2010, but now that the show is over, what type of roles will he go for next? Already on the docket are Black Mass, where he plays FBI agent Robert Fitzpatrick to Johnny Depp’s Whitey Bulger, and the Sundance-premiered The Overnight, which apparently is a different sort of dick role. He also just appeared in the newly released Hot Tub Time Machine 2, taking over the slot John Cusack vacated, but the less said about that, the better.

What follows is an evaluation of some of the key performances1 of Scott’s recent career, plotted on the Adam Scott Character Credit To/Stain Upon Humanity Spectrum. A 10 is basically an angel in human form, while a minus-10 is a hellspawn signaling the deserved end of our collective existence.

Ben Wyatt’s probably been the most adorkable character on network television for the past five years. Originally introduced on Parks and Rec as a state auditor who came to Pawnee to mercilessly gut the city’s mismanaged budget, it took less than 13 minutes for the show to give its first inklings that he wouldn’t be Leslie Knope’s nemesis, but rather evolve into her biggest supporter, her husband, and the father to their little-seen triplets. Eventually he comes to love Pawnee nearly as much as Knope, and maybe as much as he loves Letters to Cleo. The architect of both the spectacular failure Ice Town and the surprisingly popular Cones of Dunshire, Wyatt only loses points as a good person for constantly inflating the hopes of Barney Varmn and the staff of Tilton & Radomski Accounting only to disappoint them again and again.

Scott’s real breakthrough role came playing an actor who wasted his 15 minutes of fame on a catchphrase-spewing character in a beer commercial2 and now has to go work as a bartender for a lower-tier catering company. Despite that logline, it’s also one of the best TV comedies of the past decade. On the show it quickly becomes clear that though Pollard is bitter, he’s actually a really decent dude, capable of forging relationships with the many screwups who surround him.

Scott’s first starring role in a feature is, unfortunately, a middling bit of Gen X neuroses. Ostensibly a comedy about family dynamics after a bitter divorce, it just follows the usual “guy who thinks he has it all figured out but has nothing figured out” template. Maybe A.C.O.D. fails because Scott’s Carter is neither an entirely awesome nor insufferable person.

In the first episode of this Comedy Central series, Scott plays one of American history’s most infamous villains. This being Drunk History, Booth’s pro-slavery stance is downplayed and his assassination of Abraham Lincoln is more about Booth’s rivalry with his actor brother and mistreatment by their father.

Placement on the Adam Scott Character Credit To/Stain Upon Humanity Spectrum: minus-7.5

The assistant to the assistant general manager in Tampa, he offers Kenny Powers the chance to return to pro baseball that the pitcher’s been desperately hoping for. Scott’s Anderson delivers an unending supply of both condescension and ego-stroking, and later it’s revealed that he had no place giving Powers the offer and is about to check into rehab. (To be fair, Powers does something just as awful to someone else in almost every single episode of the series.) In the show’s second season, Anderson semi-redeems himself (after admitting he slept with his sponsor’s wife) by coming to Mexico with a real opportunity to get Powers into the minors.

Placement on the Adam Scott Character Credit To/Stain Upon Humanity Spectrum: minus-8.3

In this Ben Stiller vehicle, Scott plays a transition manager with a highly manicured beard. He’s in charge of turning Life from a noble print mag to lowly online publication. That basically means he’s supposed to fire a lot of people — a job that never gets the audience on your side unless you’re George Clooney — but he takes it a step further by going about it with insensitivity and cruelty. This corporate bully also receives a couple of shots for not knowing the meaning of the word “quintessence” or the point of David Bowie’s “Space Oddity.”

Placement on the Adam Scott Character Credit To/Stain Upon Humanity Spectrum: minus-8.5

Scott piles on the asshole accoutrements — Bluetooth earpiece, unbuttoned motorcycle jacket, love of Dane Cook, love of a cappella, Seal anecdotes, real estate broker’s license — for this one. It may be Scott’s best-known work playing a terrible person, and it also might be his most cartoonish. And listen, I didn’t pitch this story to get labeled as a Derek Huff apologist, but it should be recognized that it’s Will Ferrell and John C. Reilly’s characters’ mutual hate of Derek that makes them become best friends in the first place, and that it’s Derek’s desire to potentially humiliate his birth brother at the Catalina Wine Mixer that eventually brings the entire family back together. Derek Huff is also the only one of Scott’s jerkwads who gets something resembling redemption.

Placement on the Adam Scott Character Credit To/Stain Upon Humanity Spectrum: minus-8.9

Scott showed up briefly in Terry Zwigoff’s largely forgotten Art School Confidential as the most famous alum of the Strathmore Institute. It’s not a long performance, but it shows that Scott is perhaps the best at being the worst when he goes with ultra-confident pretentiousness. He’s in one scene of this screwy satire, but this character may be Scott’s crowning achievement because he’s fully aware of what an awful person he is.

Placement on the Adam Scott Character Credit To/Stain Upon Humanity Spectrum: minus-9.7