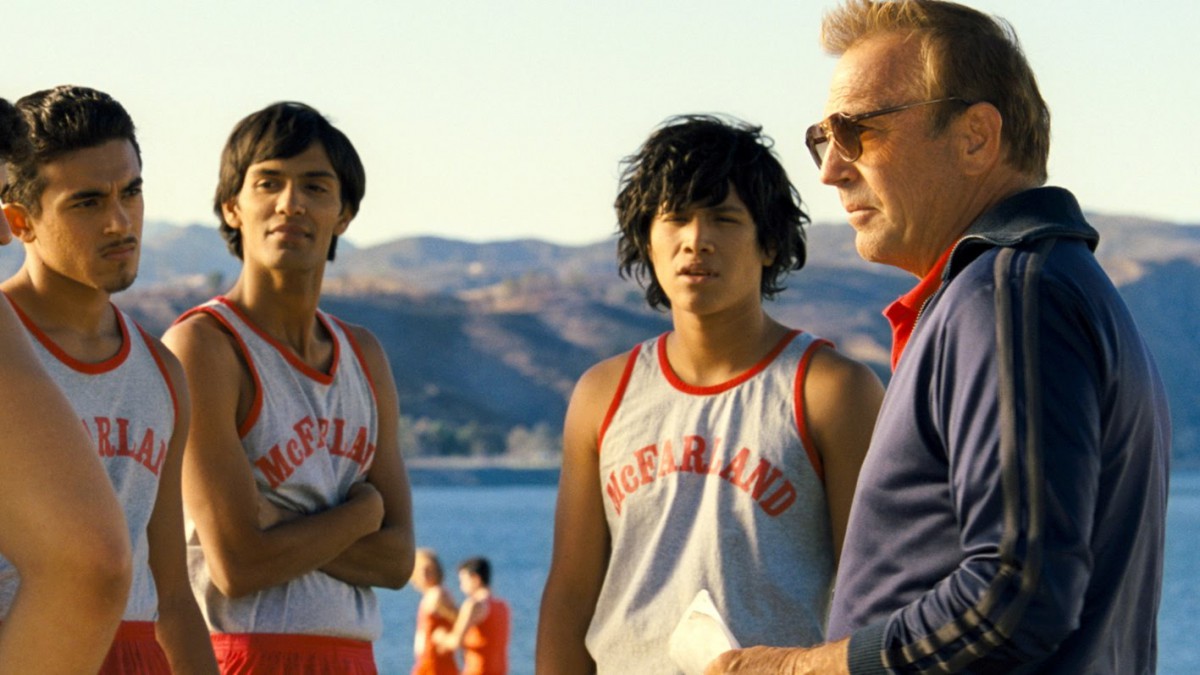 McFarland, USA tells us — immediately and gently — that it’s based on a true story, set in 1987. What seems obviously false, however, is that a football coach played by Kevin Costner, exiled from Edenic Boise for a foul temper, would move his family to California’s Central Valley only to be intimidated by a parade of stock Mexicans in toy cars. Oh, the movie tries to convince you that the stone-faced dudes who emerge from the cars are to be feared. But the slow-motion tracking shot that cuts between the coach and one of the would-be cholos is just men’s-room cruise-y. Costner is too tall, too tan, too much the director of Dances With Wolves and too devoted a lovemaker to Whitney Houston for this kind of automatic bigotry to do more than make you laugh. Eastwood, yes. But this guy? It was a hoot when the movies tried it on Michelle Pfeiffer 20 years ago. It’s hilarious now.

Why not drop the Halloween mask and get to the cross-country meets and cross-cultural quinceañera? Why not get straight to the story of how Jim White changed a piece of McFarland High School and McFarland High School changed him? It’s as if director Niki Caro was hired to make one type of Disney sports movie and then put forth another. The result is pretty good. It’s got so much humanity and competitive sports that there’s no need to manufacture all of this racial tension. Caro keeps trying to shift the movie’s priorities away from the coach, his wife (Maria Bello — of course), and their daughters (Morgan Saylor, Elsie Fisher), and to the Chicanos who wind up running on a cross-country team that Coach White invents.

Yes, the brilliant idea comes to him when he notices Thomas Valles (Carlos Pratts) jackrabbiting across an open field and the three Diaz brothers — tubby Danny (Ramiro Rodriguez), serious David (Rafael Martinez), lanky Damacio (Michael Aguero) — hightailing it to school. The movie doesn’t present the running-club revelation as a lightning strike so much as a moment of “duh.” White has already been booted from this football team, too — for conscientiously denying a concussed player reentry onto the field. He’s briefly a coach without a sport.

The movie eases from an exploration of Costner’s face into a portrait of days and nights in this poor, dusty, inland farming hamlet. We’re told that the high school’s neighbor is a prison, but, at 128 minutes, the movie couldn’t possibly take on that conflict, too. It heads in the opposite direction: up. Off we go to the Diaz household, as their mother (Diana Maria Riva) drags the boys from bed at 4:30 most mornings to day-labor for their father before school. There we are with Thomas, the strapping star of the team, so unhappily tense with stress at home that he considers flinging himself into oncoming traffic. But Coach White — or “Blanco,” as he’s so unaffectionately called for about 40 minutes — is there to pick cabbages with the brothers and to yank Thomas from the brink. It’s all sappy, sure. But here’s a movie that sees corn and dares to make a meal.

It’s hard to overstate how exhausting it gets looking at the hard, scary-ass faces Latino actors are always asked to make for white audiences. This is why those opening scenes in McFarland are so dumb. This movie just feels smarter than that. Plus, we’ve seen the poster: It’s the seven boys from the team leaping into the Pacific Ocean. But the movie apologizes along with Coach White. After that dispiriting opener, it gives you such an exuberant range of brown faces — some acted better than others, but all brimming with life. Danny Mora, who plays the grizzled proprietor of the general store, should be prescribed to fight the blues. And as Señora Diaz, Riva’s entire performance is a trick. She comes on like the stoic nonactors who tend to play these parts, then turns into Rita Moreno, speaking in what must be noted is a deplorable accent. But she’s a veteran, and she seems so surprised and delighted by how robust her part is that she can’t help herself, and so you let her make you laugh.

When the movie is working, it does as Riva does and disarms you. You fall for the kids playing the runners because Caro lets their souls come through in the bus rides and the race sequences and the shameless scenes of cabbage picking. What Pratts lacks as a complex performer, he makes up for in emotional heaviness. He has a face you feel for. And with just one moment, Rodriguez practically steals the movie. These are not hall-of-fame roles, but the actors do something with them. I don’t think Bello is here because she gets to reinvent The Wife, but she can see this meager part for slightly more than it is. Saylor is also really good as Ye Older Teenage Daughter. At one point, Coach White forgets the kid’s 15th birthday, and in the movie theater, the private tears Saylor cries threatened to go viral.

When the younger White daughter refuses to let her father paint over the mural of the saintly cabbage-and-lettuce-bearing Mexican woman that dominates the living room — the very one at which the whole White family originally turned up their noses — it’s racially tolerant schmaltz. But at least you know where the film stands. It’s pleading, sensitive, and manipulative at dollar-store prices. (Gangs, alas, do bang; and right after that quinceañera!) Still, it’s hard to leave McFarland, USA feeling that it means anything but well. It’s for sheltered audiences — for the Whites in the film and the ones watching it — who lack the capacity or opportunity to see Latinos as more than service-class citizens or illegal invaders. It’s also a movie for Latinos who wouldn’t mind a glimpse at even scarce approximations of a fuller screen self.

There are, of course, too many “we’re never going to be nothing but pickers” lines. And when a bad back derails Coach White’s attempt to pick cabbages, he uses his ailment to motivate the team with borderline preposterousness: Man, you guys are so much more superhumanly hardworking than these spoiled Palo Alto brats. But the heavy hand relaxes, the races are run, the White girls get their nails done by the fake cholo’s glorious, chipper novia, and the closing credits bring the kind of postscript you want from one of these based-on-a-true-story concoctions.

McFarland barely qualifies as political. Yet in this climate, its existence constitutes a benign political act, one for which Costner is prepared once again to lead. Incredibly, he can also be found at the moment in Black or White, as an affluent, bigoted drunk standing trial in a custody battle, with Octavia Spencer, for his biracial granddaughter. That movie is a fiasco of wrongheaded grandstanding, in which Costner throws himself under the bus in order to boost tolerance. A few more of these and he’ll become inside-out Sidney Poitier. That drunken part is more sacrificial than this one in McFarland. Costner knows what he’s doing here with the broad cachet of his whiteness. He’s the lettuce by which a plate of more exotic vegetables might still seem a salad. 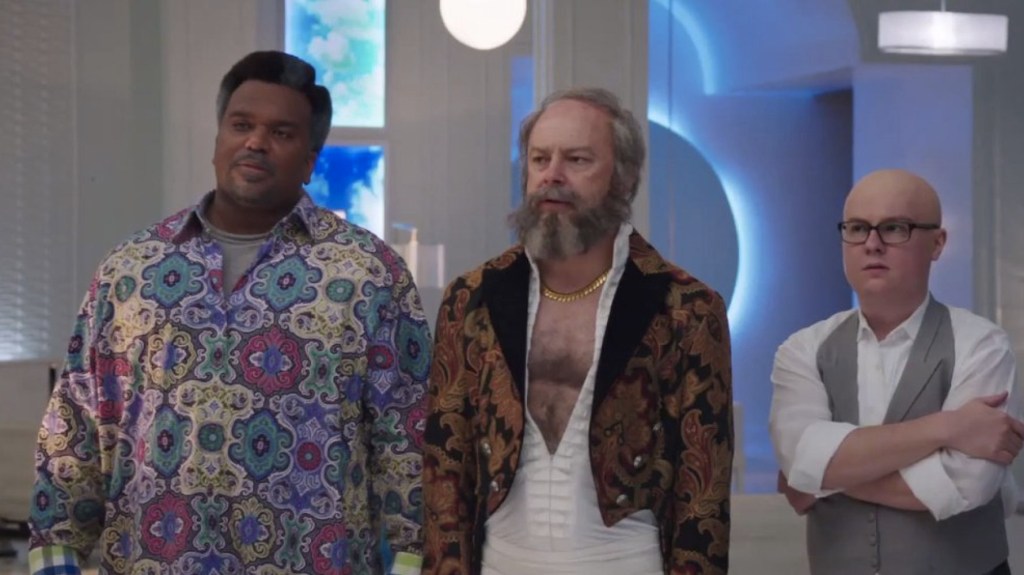 Hot Tub Time Machine 2 just keeps humping your leg. The movie is set in 2015, five years after the improbable first installment, and then vaults 10 years into the future to find out who shot louche Lou (Rob Corddry) in the penis. His son Jacob (Clark Duke) and best friend Nick (Craig Robinson) join him for a spree involving homicidal self-driving smart cars, a nightclub called the Wink, and a game-for-everything groom-to-be (Adam Scott).

Director Steve Pink and screenwriter Josh Heald cram every other sentence with variations on the work “fuck,” which should be innocuous, except here it’s all that the actors seem to have to say. They give the women virtually nothing funny to do — Gillian Jacobs, as Scott’s fiancée, does manage to gather a head of steam, but, as with most of the jokes here, it leads straight to a penis. The best gag invents a television show called Choozy Doozy, in which contestants do whatever the audience commands. The host (an unbilled Christian Slater) bemoans how often the commands involve a penis. The dare here requires Corddry, Robinson, and Scott to cringe at the prospect of virtual-reality intercourse with each other. It’s the best gag both because it inches toward game-show satire (the catchphrase has a hilarious, Running Man awfulness) and because the alternative options are far worse.

The first movie had a hacky, grubby sorcery. It was like watching a grease stain do sketch comedy. But it also had something to say about the pros and cons of nostalgia, no matter how inarticulate that something turned out to be. There was also John Cusack trying bravely to give a performance in the lead role, sending up a version of his beloved adolescent screen self. The sequel is conducted, without Cusack, in a state of smug douchery. Corddry, Robinson, Duke, and Scott have their partisans in the audience, but they’re not actors who can carry a movie, even when it’s split four ways — not when their default settings tend to be some variation on “big baby” and “obnoxious jerk.”

Elsewhere, they steal scenes from better actors and bigger, funnier stars. Watching them here is like seeing a quartet of side dishes never get close to becoming an entrée. Liking people in a comedy isn’t a prerequisite for enjoying it. But you do have to want to spend time with them. If they have a hot tub, for instance, you can’t wish for someone to drop a lamp in the water. You can’t just want to laugh. You have to actually do it.