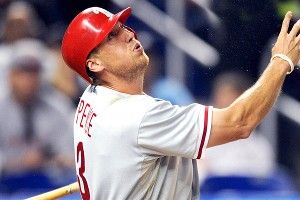 We just covered the rise and fall of the Phillies via the Shane Victorino trade, so here’s a quicker take on the Hunter Pence deal: Good add for the Giants, more prospects and payroll space for the Phillies, and a blow to the Dodgers (and Diamondbacks).

Let’s start with what Pence is not. He is not the offensive juggernaut he appeared to be last year. See if you can spot the outlier in this pattern:

Those are his batting averages on balls in play over the past five seasons. It’s a bit of a cheat, since Pence also posted a .377 BABIP in 108 games as a rookie in 2007. But his career .325 mark still points to 2011 as being out of line with career norms. And BABIP is all that separates Pence’s 2012 season from 2011. His walk rate is identical, his strikeout rate is just about identical, his line drive rate is just about identical, his power numbers are almost exactly the same. Last year’s .314/.370/.502 versus this year’s 271/.336/.447 come down to more balls falling in for hits last year than this year.

With that established, Pence still constitutes a solid upgrade for the Giants. The team lacked right-handed power behind Buster Posey, especially with Pablo Sandoval recently routed to the DL. Gregor Blanco stopped hitting and lost his right-field job to Nate Schierholtz, a nice player who’s better suited to a fourth outfielder’s role. If everything breaks right, Pence could add a win or so to the Giants’ total for the remainder of the season. With the Giants and Dodgers tied for first place, the Dodgers making multiple reinforcements of their own, and the talented Diamondbacks quietly climbing to within 3½ games of the division lead, that one win could loom large.

There is this, though: The Giants traded their top pitching prospect for Carlos Beltran at the 2011 deadline. Beltran raked for two months, at which time the Giants had an exclusive negotiating window to sign him to a short contract extension. He bolted for the low price of two years, $26 million, and is raking again this year. And now the outfielder-starved Giants trade three players, including a very promising catcher prospect, to rent an inferior player in Pence? Pence does offer an additional year of team control, since he can’t become a free agent until after 2013. Still, tough to say if this is a byproduct of Giants ownership holding the line on salaries (they sell out AT&T Park a lot and pull in ample TV revenue, but they’re also strapped with substantial stadium debt payments and already had a payroll north of $130 million), GM Brian Sabean showing less-than-perfect foresight, or a little of both.

Heading back to Philly are 21-year-old catching prospect Tommy Joseph, Single-A right-hander Seth Rosin, and Schierholtz. Ranked no. 2 in the Giants’ system by Baseball America heading into this season, Joseph was a second-round pick by San Francisco in 2009. He hit 22 homers at Single-A San Jose last year and eight more at Double-A Richmond this year, and he is considered a plus power prospect with an iffy batting eye (282 strikeouts and just 80 walks in 324 career minor league games). Scouts give him points for his mark, but not his receiving ability. He wasn’t going to see the light of day with Posey entrenched as the Giants’ franchise position player, which made him a logical trade chip. With Chooch Ruiz turning 35 once his new contract’s up in the offseason of 2013-2014, Joseph could become his successor.

Aside from possessing one of the best names ever for a pitcher, Rosin does offer a whiff of potential. The 23-year-old is a 6-foot-5, 240-pound behemoth with a three-pitch arsenal, combining a low-90s fastball with a curve and changeup. In 156⅓ career innings spanning low- to high- Single-A ball, he’s struck out 170 batters, walked 49, and allowed just nine homers. As FanGraphs prospect analyst Marc Hulet wrote in his offseason Giants prospect rankings, Rosin’s a bit old for his level, but he’s also a possible late bloomer, having come from a northern state (Minnesota) where he couldn’t play year-round. As for Schierholtz, he’s likely just a placeholder in Philly. Post-hype outfield prospect Domonic Brown has hit .286/.335/.432 at Triple-A Lehigh Valley this year, with no significant platoon split. A month shy of his 25th birthday, it would make sense for Brown to get a shot at regular playing time for the Phillies during the season’s final two months, so they can see what they have.