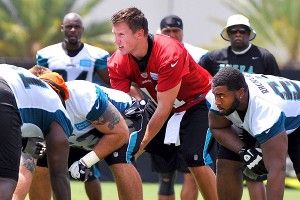 The start of training camp is a time for hope, for promise, for finding reasons to be excited about the future. The situation in Jacksonville this week is no different. There is good news coming out of Jags camp, and that news is things can’t get any worse.

Already faced with a lack of interest so formidable they’re encouraging fans to come with sack lunches in hand, the start of Jaguars training camp can’t be described as anything less than a disaster.

Maurice Jones-Drew, who could probably sue the organization for the workload and punishment he’s taken over the past couple years, is absent from camp as he looks for a new deal. In fact, he hasn’t even met his new head coach. Fifth overall pick Justin Blackmon, fresh off a June DUI, is away from camp as the last remaining unsigned first-round pick. Laurent Robinson, he of the five-year, $32.5 million contract based on a handful of games from 2011, is having trouble catching the ball. Oh, and $35 million tight end Marcedes Lewis is apparently out of shape. And likely is also having continued problems catching the ball.

The Jags, more than any team in the league, are in transition. When Shahid Khan bought the team last year, the news came with the feeling that new ownership might lead the franchise to stay in Jacksonville rather than take its place as the logical team to move to Los Angeles. One of the new ownership’s first orders of business in restoring stability was finding a new coaching staff that could provide the team a new direction. Former Falcons offensive coordinator Mike Mularkey is that man, and it will take time to see what sort of job he can do. Safe to say that with the current roster and all the contract problems already in place, he hasn’t been put in an easy position.

As it will with Mularkey, only time will tell if second-year starter Blaine Gabbert is Jacksonville’s answer at quarterback. When a team drafts a quarterback with a top-10 pick, it’s likely that quarterback’s success will determine his team’s success for the next five years. Gabbert’s first season in Jacksonville was abysmal. The problems with his accuracy were trumped by the problems with his feel for the pocket at the pro level. These concerns aren’t new. Even in college, Gabbert bailed out on plays quickly, and what might have once been considered a weakness that would fade with maturation may be turning into an inherent flaw.

I watched the first camp Gabbert ever led as a starting quarterback, during his sophomore season at Missouri, and as the early captain of his bandwagon, I’m ready to go down with the ship. It’s hard not to see how Jacksonville can’t do the same. At face value, Gabbert is a hard worker, and natural leader, and has every physical gift asked for in a quarterback. The thing is, there’s a reason Peyton Manning and Drew Brees never get sacked and happen to be the best at what they do. More than anything else, quarterback is a position about feel, and that’s something that can’t be taught.

Hard Knocks will start airing next week, and we’ll see the ups and downs the new-look Dolphins will take throughout Joe Philbin’s first training camp. No matter how much drama HBO manages to stir up, and there will be plenty, it will likely be nothing compared to what’s happening in Jacksonville. A handful of personalities will likely decide the future of an entire franchise — both its success and possibly its existence. Sign me up for that show.