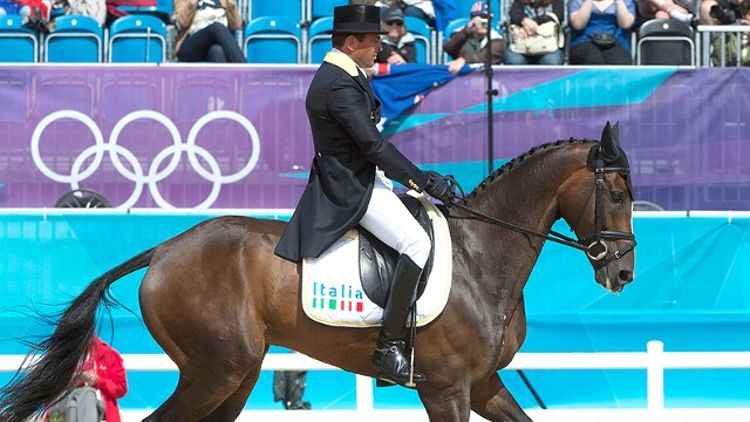 Knowledge is power. Educate yourself. Use this Olympics glossary and impress your friends with your new-found understanding of everything.

aerial (artistic gymnastics): Singular: essentially a cartwheel, but with no hands; plural: second-best System of a Down song.

apron (boxing): The part of the ring canvas that extends beyond the ropes.

arm stand dive (diving): The dive that starts from a handstand; only on platforms and not springboards, because that would just be too crazy. This isn’t the X Games.

artistic impression (synchronized swimming): One of the two categories that the event is judged in (the other being technical merit); all about how the choreography, music, and presentation make the judges feel; is as subjective as it sounds.

athletics: The technical term for the 47 events that make up track and field.

badmitton: The incorrect spelling of the b-side tennis event badminton.

bathing caps (water polo): The headgear worn by the players that comes with ear protectors; ear protectors make the all the bros in the water look like Princess Leia.

BMX: Stands for “bicycle motocross”; second Olympics; made popular in mainstream culture when the demo version of “Mat Hoffman Pro BMX” was made available in the 2001 PlayStation 1 edition of Tony Hawk Pro Skater 2.

Bolt, Usain: Star of many a rap lyric; fast runner.

boomerang throw (rhythmic gymnastics): The maneuver in which the cane is thrown in the air, but the ribbon is held onto, causing the cane to fly back down toward the gymnast at a high speed; is a good thing when gymnast catches said cane; is a bad thing if cane hits gymnast in face.

bucket hats: A head-wear movement of the mid-’90s that was thought to be dead; very much a thing at the 30th Olympiad (Ralph Lauren, archers, Princess Anne).

canter (dressage): A type of gait for a horse; faster than a trot; slower than a gallop; has nothing to do with a dollop; smells like a furlong.

cha-ryoet (taekwondo): A referee’s command; rough translation: “You ready? Let’s DO this. FIGHT.”

clean and jerk (weight lifting): First you “clean” (pull the barbell up to shoulder height while squatting and then stand up), and then you “jerk” (lift the barbell over your head) and then you drop it on the mat and scream forever.

counter-parry (fencing): A defensive move in which one fencer draws an air circle around the opponent’s weapon and then swats it away, assumingly while muttering something under his or her breath in French.

deckwork (synchronized swimming): The sexy moves (also known as “mood-setting”) that the swimmers do after the music begins, but before they enter the water.

dressage: One of the three types of equestrian; not the horse competition in which it jumps over bars and big puddles; the one in which it just struts around the arena looking all cute and bougie and whatnot.

épée (fencing): A sword used in duels in modern times, not for killing but for winning Olympic medals; heavier, larger, and stiffer than its cousin, the foil.

equestrian: Not an event in itself, but umbrella term for three events (dressage, eventing, and jumping).

Eskimo roll (canoe/kayak): The move in which the paddler does a 360 roll in his or her pointy water vehicle, but remains inside.

eventing: The most complex of the equestrian events; combines the athleticism of jumping, the sassiness of dressage, and the stamina of cross-country; most commonly takes place as a three-day event.

facial (volleyball): The act of spiking the ball in the opponent’s face; could be accidental; should always be malicious.

fencing: A very loud, rude sport that takes place in a dark, Tron-like chamber where you are allowed to just yell at the other person as loud as you want, whenever you want; no one dies.

foible (fencing): The weak, flimsy part of the sword-murder device, between the point and the middle.

foil (fencing): Like an épée, but seemingly worse in every way; also not used to kill.

football: The real name for soccer; a sport played in America and advertised on NBC to remind viewers that we are Americans and therefore we are number one.

Fosbury flop (athletics): A style of high-jumping where the bar is cleared with the back arched, facing upward, and proceeds to land on back on the mat; named after Dick Fosbury, who one can only assume did it like this.

GABBBBBYYYYYY: The noise made by America every time American gymnast Gabby Douglas does something great and then smiles.

GAINER (diving): The slang/cool term for a reverse dive (facing away from pool); before a GAINER is attempted, diver has to scream “GAINER,” unless you’re in the camp that only does reverse dives, in which case you say nothing and your life is boring.

hammer (athletics): Related to the event “hammer throw”; doesn’t not involve throwing a hammer; is more like a ball-and-chain.

hand ball (football): A violation when a player touches the ball with his or her hand.

hockey: The official term for what is commonly thought of as “field hockey.”

Instagram: The smartphone application used by USA men’s basketball photographer Kevin Love that is being utilized to amazingly make the 2012 team more charming and fun than the 1992 Dream Team. #GotEm

ippon (judo): Term for winning a match in a single move (swag), either by pile-driving (not a judo term) someone on their back with extreme force or putting someone in a strangle hold (a judo term) or arm lock for 25 seconds.

jumping: The third type of equestrian; involves the horse doing a lot of jumping over things; short for “showjumping.”

jump-off (jumping): Someone on the side who you call late at night; a popular 2003 Lil Kim song; an extra, tie-breaking round after the final round of competition.

Kazakhstan: A country that, at the time of this post, has two more gold medals than host country Great Britain; has two gold medals.

keikoku (judo): A penalty (described as “grave”) for an offense that results in a half point for the offended.

kong (volleyball): A one-handed block; named after King Kong and his tendency to get all worked up on that building and then pimp-slap planes as they fly by.

Kynard, Erik: American high jumper; took a picture with Kobe Bryant; looks exactly like Kobe Bryant; I have no idea which one is Kobe Bryant.

Lezakian: A saying named after American hero Jason Lezak; describes a performance that involves being better than the French and loving America.

Magnificent Seven: Miller and Moceanu and Dawes and Strug and Chow and Borden and Phelps; the standard to which every USA Women’s Gymnastics team is held; ATLANTA 1996.

Murray, Andy: Tennis player, WILL WIN THE GOLD FOR GREAT BRITAIN IN SINGLES, YOU HEARD IT HERE FIRST.

outclassed (boxing): A ruling when the referee stops a fight because someone is getting beat down so badly (not classy).

peloton (cycling): The main group of riders in a race.

pen holder (table tennis): A grip of the racket that resembles holding a pen; popular among Asian table tennis players; makes for a stronger forehand and a weaker backhand.

piaffe (equestrian): Of all the sassy trots, this is the sassiest of trots.

playmaker (handball): The director of the offense who stands mid-court and attempts to penetrate the defense; the technical term for sinking the middle cup on your first shot in beer pong at Dartmouth College.

race walking: An Olympic sport; the most intense power walk ever; one foot must appear to be touching the ground at all times; yes, this is an Olympic sport.

Randolph (trampoline): Front flip with 2.5 twists; known in hip circles as a “Randy.”

Robin Hood (archery): OK, so someone shoots an arrow, right? And it hits the target. And then you walk up to the line and draw back your bow and release. And then your arrow splits the shaft of the arrow that’s been previously shot. That’s Robin Hood. #RobinHood.

saved by the bell (boxing): The end-of-round bell prevents you from being counted out, because it comes before the 10-count; in the Olympics only applies at the final round; Lisa Turtle.

skeet (shooting): Clay targets put on this earth to be destroyed by guns; this.

steeplechase (athletics, eventing): The act of humans and horses jumping over obstacles like large puddles and bushes.

synchronized: A word you put before swimming and diving to make the event 100x cooler.

technical superiority (wrestling): A win that takes place when one wrestler gets a six-point lead on another; a fancier skunk rule.

trap shooting (shooting): The act of shooting skeet; the act of firing a gun at the ceiling, thereby ending the party that was taking place in a drug-riddled community.

Winter Olympics: The thing that used to be on Summer Olympic years but is now on World Cup years; and I think Bonnie Blair won a bunch of medals when I was little.

X10-ring (archery): A mark that indicates an arrow has hit the innermost circle.

yeol (taekwondo): The number 10 in Korean; when said in a bout, indicates a knockout.

ZAZA PACHULIA: YOU’RE NOT IN THE OLYMPICS, YOU BETTER BE AT HOME IN ATLANTA PRACTICING THAT JUMP HOOK, OR ELSE.