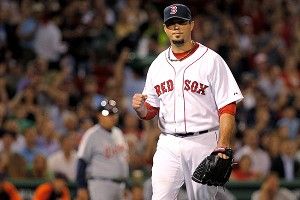 Getting older isn’t a sudden, traumatic experience. It’s a malicious, sneaky process. You wake up sore a little more often. Those jeans don’t look quite as good as they once did. You forget things. React a split-second slower. For years, you don’t notice those tiny lines forming around your eyes, imperceptibly creeping their way across your face — until one day they’re staring back at you, as if out of nowhere.

At age 32, Josh Beckett isn’t a bad pitcher by any means. When he’s on, he throws four pitches for strikes and can mow down any lineup. But he’s on a little less often these days. He throws a tick slower. He’ll miss his spots by an inch or two. You might look up after six innings and see a perfectly solid outing. Just not quite the dominant Beckett of old.

It’s much easier to blame problems on big, ugly events than it is to acknowledge the slow creep of age, or of general regression. Beckett faltered down the stretch last year, we were told, because of fried chicken and beer, because of bad chemistry and a select group of bad actors making themselves bigger than the team rather than committing to a championship season. It’s certainly possible that better conditioning might’ve prevented the nagging injuries that ate into Beckett’s effectiveness last September. This season again, fans reacted not so much to Beckett’s dip in performance, but to what Golfgate represented: a player’s seeming indifference to that dip, a failure to acknowledge that pretty good isn’t good enough. That’s the thing about aging: You have to work harder, get smarter, and be more creative just to maintain status quo. Beckett may well be trying to do all of this away from the prying eyes of media and fans. And it still might not be enough. Aging sucks that way.

We can’t say definitively that Beckett’s disappointing performance (7 IP, 10 H, 4 R, 1 K, 1 BB) in Thursday night’s 7-3 loss to the Tigers was due to advancing age. Maybe he fought with his family that day. Maybe some jerk cut him off in traffic. Maybe his release point was just a little off, or he couldn’t get comfortable with his plant foot, or maybe shit just happened. Understanding baseball is all about looking at the big picture, and you never want to overreact to one event, one game, or even one month. But squint a bit, and you could see those symptoms of Beckett’s broader, slow decay creeping into his performance.

In the third inning, Beckett throws a four-seam fastball — once a 93-94-mph pitch — at 91 to utilityman Don Kelly. He then tries to tie Kelly up with a hard cutter on the hands. But the pitch doesn’t get inside far enough. Which isn’t necessarily a problem if you can muscle into the mid-90s, or even the low-90s; this one was 89. Kelly taps a bloop single to start the Tigers’ threat. Another unimpressive hitter, no. 9 man Danny Worth (.214/.303/.250), follows. PITCHf/x listed Beckett’s 0-1 pitch to Worth as another cutter. Really, it was just a batting practice fastball, not only coming in at 89, but floating in belt-high, right down the middle. Worth ripped the pitch for a double, and a three-run rally was under way.

Beckett’s problems continued in the fourth. After a foul tip off the mask blew up Alex Avila’s nose and knocked him from the game, his replacement, Gerald Laird, got to face Beckett. Laird’s now also 32, a bit past the height of his powers, modest though they may have been. And he’s never hit righties well, even in his prime, stumbling to a career .232/.291/.343 line against them. But he’s still a major league hitter, or at least a reasonable facsimile of one. Throw almost anyone a dead-straight, thigh-high, 91-mph fastball right down Commonwealth and they’ll hit it, in this case for a long single off the base of the Monster.

The Tigers didn’t exactly crush bombs off Beckett all night. Of their 10 hits against him, only two went for extra bases, both doubles. Quintin Berry, who gave the Red Sox fits all night with three hits, two steals, and what at the time looked like a possible game-saving catch in the seventh, collected two of those hits on a bunt single and a weak roller of his own that barely sneaked into the outfield. But over and over, one got the sense that the Tigers’ lack of thump in their injured lineup (beyond Cabrera and Fielder) might’ve been the reason for Beckett giving up soft singles and not long homers.

You could see Beckett’s diminished fastball velocity all night. He nearly broke a career-long streak, too, going 5 1/3 innings before striking out his first batter of the game, thus narrowly keeping alive a streak that’s lasted 289 straight appearances. But some of the subtler elements hurt him, too, like the gap between his fastball and changeup falling from 7-8 mph early in his career to less than 5 mph now. When you’re throwing everything straight and catching too much of the plate, and not throwing as hard, you can get hurt … even if it takes a thousand cuts to do it.

This is hardly a crisis. Beckett’s still generating more swinging strikes this year than he did in any season between 2006 and 2010 (even if he’s down from peak, early-career levels). He still strikes out about three batters for every one he walks. But the slippage is there, just enough to let that fourth run cross on a bit of an off day, one that leads to a loss.

In some ways, it’s the same with the Red Sox as a whole. Past key contributors like Beckett and Kevin Youkilis have slipped, going from borderline superstars to merely good players (actually, Youkilis has been worse than that over the past 12 months or so, his aging compounded by a brutal string of injuries). That doesn’t mean the Red Sox are categorically too old, though; their average team age has topped 30 for years, and they’ve contended and won throughout … you sure as hell don’t see much regression for David Ortiz, to name one star who’s still got it. Boston’s last-place standing doesn’t mean this is a bad team, either. They’re still just three games out of first in baseball’s toughest division, getting impressive production from rising players like Jarrod Saltalamacchia (Thursday’s bomb made it six homers in his last 15 games). The team is struggling under the weight of freak injuries to peak-age players like Jacoby Ellsbury and Carl Crawford more than suffering from any talent crisis or scary geezerization, and especially the disappointing seasons of twentysomething pitchers like Clay Buchholz and Jon Lester. There’s an excellent chance the Red Sox hang in the race all year, maybe even make a run at one of the two wild-card spots, injuries and all.