The Devils and Their Details: A New Second Nature for Duke Football 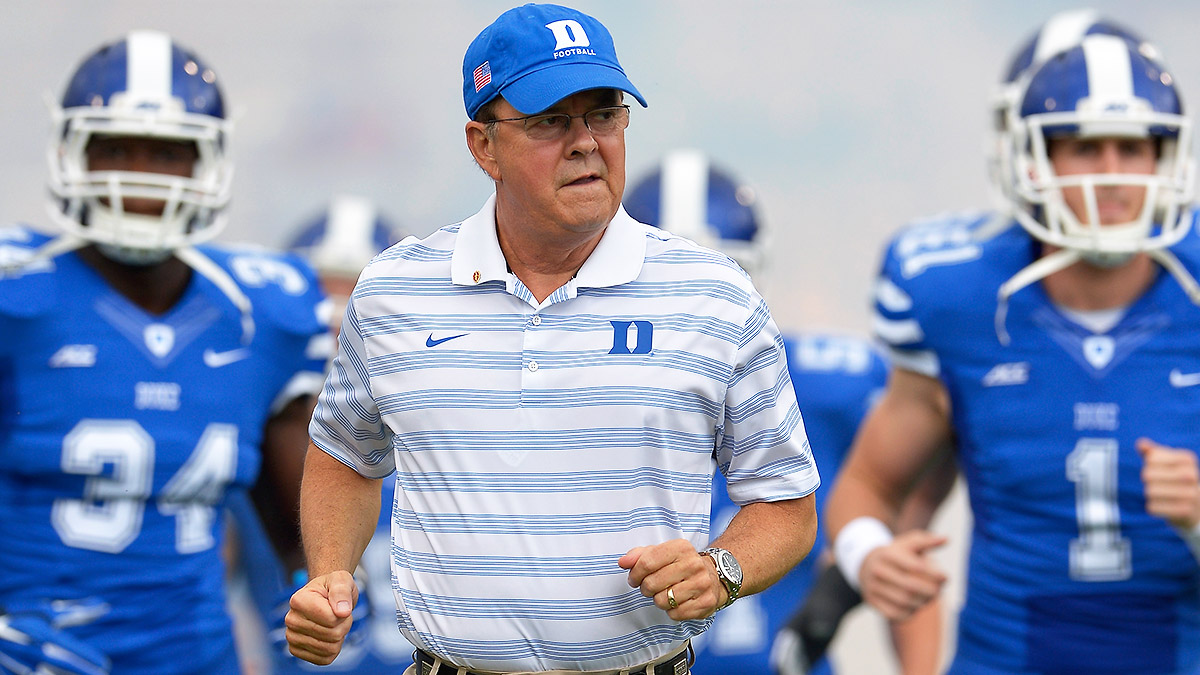 “Tomorrow,” David Cutcliffe announced on Saturday afternoon, in the tones of a town crier, “is Tuesday.” The 21st-ranked Duke football team was minutes off a one-point loss to unranked Virginia Tech, a defeat that had eliminated the Blue Devils from playoff contention and reopened the ACC Coastal race. Worse, his squad was staring down a brand-new kind of turnaround: playing its annual game against reviled in-state rival UNC on a Thursday night for the first time. Duke doesn’t make frequent weeknight appearances; this contest marks the first Thursday regular-season game for any current Blue Devils player, and they’ll have to play it after the kind of loss that must drive this particular program to distraction.

This is not a Pollyanna story. Duke football is coming off a loss, and it’s a loss the Devils should be mad about. But consider why they’re mad, and things get remarkable.

“It’s become second nature for us,” said Blue Devils linebacker David Helton after Saturday’s loss, “that we should’ve won these games.” This, about a team that infamously had recorded 10 wins in the eight years before Cutcliffe toted the gospel of football into hoops-mad Durham.

“It may affect me a little bit tonight,” Cutcliffe said on Saturday, “but tomorrow, it will not. 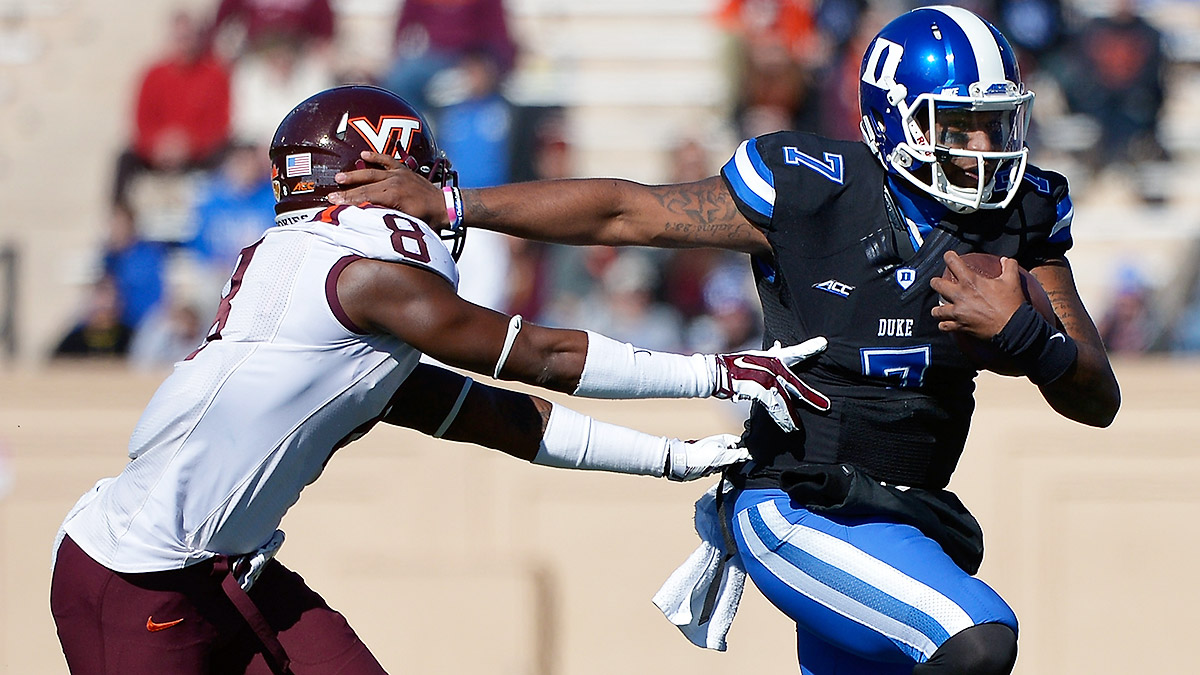 The details of Saturday’s loss are — sorry about this — deviling. Duke held a 10-0 lead at the end of the first quarter, a period in which it recorded 121 rushing yards. On the first play of the second quarter, Deon Clarke intercepted Duke quarterback Anthony Boone’s pass at the Hokies’ 2-yard line, and Virginia Tech mounted a 98-yard scoring drive. The Hokies would also score all their other points off Duke turnovers, while the Blue Devils were held exclusively to field goals for the rest of the game.

Until, in the fourth quarter, even their kicking game deserted them, and that’s where things got real sideways. Boone was sacked six times over the course of the game, and his receivers’ chemistry was out of balance for much of the afternoon, but junior placekicker Ross Martin is about as surefire as college kickers get. Heading into Week 12, he was a perfect 13-for-13 on field goals. That afternoon, Martin made three kicks — and missed two. The last attempt, a 40-yarder, would’ve lent the Blue Devils a two-point lead with about two and a half minutes to play.

“Our formula,” said Cutcliffe in his postgame press conference, “and you all know it, has been to do all the little things well. We work at it; the players believe in it, and sometimes it doesn’t go according to script.” His granular approach to coaching is a trait he inherited from Bear Bryant, for whom the Birmingham native worked early in his career, and of whom Cutcliffe remembers being “scared to death.” “I literally would almost break out in hives,” Cutcliffe told Grantland last week. “He was the master of making every little thing important, and I know that’s rubbed off on me in a big way.”

After the game, Martin was downright serene, calmly outlining for the clustered press the mechanics of where things might have gone wrong, and stating, “I’m still the same kicker I was last week. I’m the same kicker I was yesterday.” Boone backed him up: “10 times out of 10, I’m going with Ross Martin. He’s considered one of the best kickers in the country. That kind of stuff happens. You’re gonna look back after every loss and say you had more advantages, to expose a team differently somewhere. But we can’t feed off that.”

Cutcliffe wouldn’t let his players assume liability for any of it: “I told my team, and I meant this, every bit of that falls right back to me. I am responsible to see that we are ready, and that’s the end of the story. That’s the end of a one-point loss.” Shortly before concluding his presser, he reemphasized the point: “I’m not just saying this for fun. It’s all my responsibility. And I’ll find a way to get through it tonight, get over it. Three months from now, I may sink like a rock somewhere.

“Right now, I don’t have that option.” 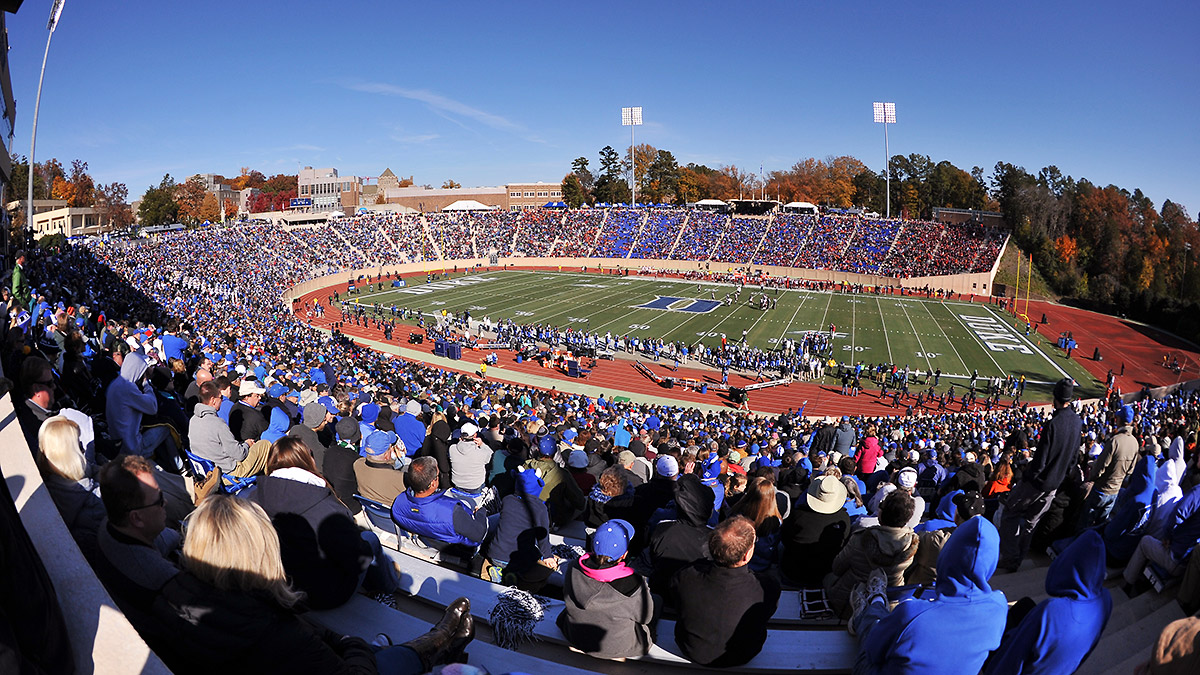 Coaching the Duke football program comes with plenty of chances to sink like a rock. There’s the matter of getting players to Durham1 in the first place. There’s the long history of struggling to put together winning records (last season’s 10-4 team was the first to finish above .500 since 1994) and contend for division titles (a newly established plateau in 2013). There are loftier goals still ahead, such as bowl wins (in 2012, the Blue Devils earned their first postseason invitation since 1995, and last season they recorded their first consecutive postseason appearances in school history; they lost both games) and conference championships (Duke lost to Florida State in moderately disastrous fashion in last year’s ACC championship game).

To this process Cutcliffe brings a certain tranquility, a matter-of-fact composure he says he picked up during his gap year away from football,2 after a triple bypass operation in 2005 forced him to abandon plans to coach quarterbacks at Notre Dame.

“I learned a lot the year I sat out of coaching,” Cutcliffe told Grantland last week, “because it was the only time I had a chance to see much in the rearview mirror. You don’t get to look in the rearview mirror very often in coaching. Once I was fired, and once I had open-heart surgery, things have been much clearer for me. There’s some peace in that.”

Peace, but no rest: Duke began Carolina prep on Sunday. At stake Thursday night: the Victory Bell trophy; a division title for the Blue Devils, who will edge out Georgia Tech for a second trip to Charlotte if they win out; and bowl eligibility for the 5-5 Tar Heels. “When you’re an 8-2 football team,” said Cutcliffe on Saturday, “you’re a lot better than most. The challenge is to find a way to become a nine-win football team. That’s the only thing we need to concern ourselves with, and the only thing we will concern ourselves with.”

Helton echoed that sentiment: “You don’t have much of a choice. You have to move on.”

Asked one reporter: Is the five-day week a kind of blessing, then, in that it makes moving on an imperative? Cutcliffe laughed: “I’d take seven, to be honest with you.”

Through all of this, there still runs a frisson of unreality. One day, now, until multihued shades of blue-clad partisans file down the steps and fill the bowl of Wallace Wade Stadium, where the narrative will concern whether Duke — Duke!­ — can take the next-to-last step to earning consecutive division titles. Cutcliffe feels it, too.

“Almost at times,” he told Grantland last week, “I get a little bit pinch-myself happy. You understand the difference of it? I’m so happy for our young people. To just watch this happen. A lot of years of tough times. The recent [history] was eight years and 10 wins, so there was no habit to come to games or to talk about games or to get excited about football. Duke’s a better place in the fall with football being fun and interesting.

“And people have come to me, in high numbers, with the comment, ‘We didn’t know the fall could be this much fun.’”