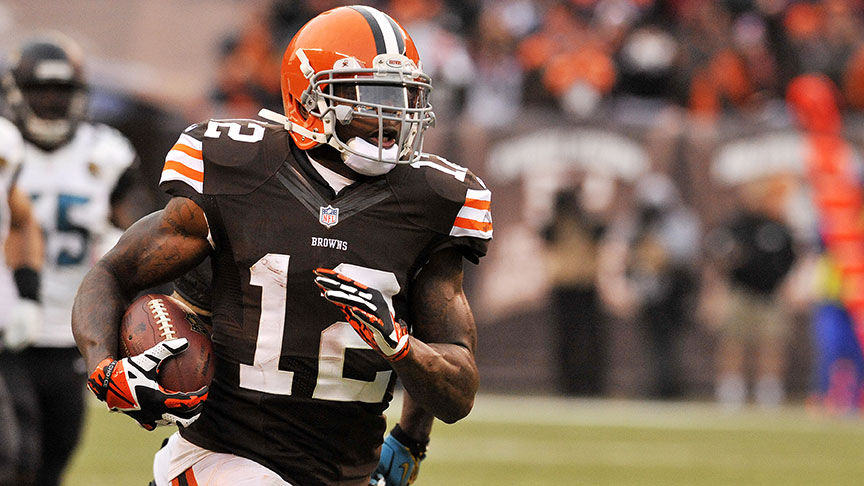 It’s not every year that a Pro Bowler suddenly returns to his team in the midst of a playoff race, but that’s about to happen for the second time in as many weeks. Josh Gordon will suit up for the Browns this coming Sunday after serving a 10-game suspension, while the 49ers got Aldon Smith back from a nine-game suspension last week.

These are unique situations. NFL suspensions are rarely this long, and these late debuts for Gordon and Smith1 differ from players returning from an injury. The latter face the constant temptation to get back on the field before being fully healthy, and when they do return, physical limitations or mental concerns about getting hurt again often diminishes their impact. Smith and Gordon were allowed to work out at team facilities during their suspensions, and although rust is possible, their fresh legs should be an asset against opponents with 10 weeks of pounding already registered on their bodies.

The Browns sit at 6-4 and are in contention in the crowded AFC North, while the 49ers sport the same record but will likely be fighting for a wild-card spot as the 9-1 Cardinals stay perched atop the NFC West. Even without Gordon and Smith, these teams have put themselves in playoff position. With them? Well, we’ll soon find out.

Cleveland management has played coy about how Gordon will be integrated into the offense, with general manager Ray Farmer rhetorically asking, “Do you disrupt what you do offensively just to make sure that you throw the ball to Josh Gordon? I don’t know if that’s really the right way to operate.” But throwing the ball to Gordon won’t disrupt the offense; it’ll disrupt the opposing defense.

After a solid rookie campaign, Gordon fully unleashed his game-breaking ability last season. In only 14 games, Gordon led the league with 1,646 receiving yards, good for the third-best per-game average since the merger.2 It’s risky — if not outright blasphemy — to compare anyone to Randy Moss, but you can see for yourself:

Remember: Gordon has spent the majority of his pro career catching passes from quarterbacking icons such as Brandon Weeden and Jason Campbell. Only 14 of Gordon’s career receptions have come from Brian Hoyer, who tore his ACL early last season.

Farmer’s comments were likely subterfuge, but it can’t hurt to set expectations low and let fans be pleasantly surprised if Gordon immediately returns to form. Although he thrived in Norv Turner’s vertical passing offense last season, Gordon is entering into a new scheme under offensive coordinator Kyle Shanahan, who uses the zone-blocking run game to set up play-action passes. Last season, Cleveland led the league in number of passes while finishing 30th in rushes; this season, the script has completely flipped, with Cleveland second in rushes and 26th in passes.

That pivotal running game has struggled in recent weeks, particularly after center Alex Mack was placed on injured reserve with a broken leg. Shiny free-agent acquisition Ben Tate was released after a series of dull performances, and now Browns fans hope that Gordon’s presence will stop defenses from loading the box. Hoyer, meanwhile, has preached caution about Gordon’s return: “We all know what Josh is capable of, but let’s not put all this pressure on him that he’s going to be the savior. We all have to be more consistent. Let’s not put that on one guy.”

Even though Cleveland passes less often this season, it’s still going deep. Hoyer ranks second in the league in both completions and yards on passes that travel 20 or more yards in the air, trailing only Andrew Luck. Those deep passes have gone to Taylor Gabriel, Travis Benjamin, and Andrew Hawkins, who are all less than 6 feet tall, so Hoyer should benefit further from having a larger target in the 6-foot-3 Gordon. Since entering the NFL in 2012, Gordon leads the league in average yards per reception (17.9) and per touchdown (47.6). Despite all the talk of caution, Hoyer must be salivating. 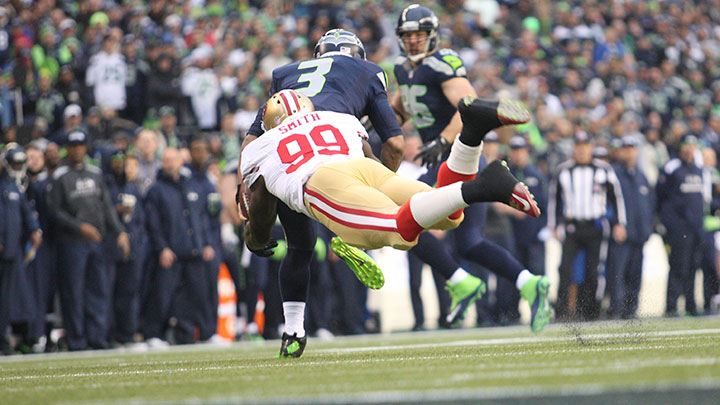 While Gordon’s value comes from making plays in the deep passing game, it’s Smith job to not even let the quarterback throw the ball. Shortly before halftime on Sunday, Smith was triple-teamed by three Giants blockers, and while it was surely happenstance, it also served as a reminder that, oh yeah, offenses still have to respect a player who has 42 sacks in 44 games. He didn’t record any sacks in his 57 snaps against New York, but The MMQB’s Jenny Vrentas charted him with six quarterback hurries and two hits.

The 49ers don’t have to do anything special to reintroduce Smith into the Vic Fangio defense he has played in his entire NFL career. They just need him to produce quickly to help mitigate the absences of inside linebackers Patrick Willis, now on injured reserve with a toe injury, and NaVorro Bowman, who still hasn’t returned to the field after tearing his ACL in last year’s NFC Championship Game. Pass rushing doesn’t come from inside linebackers, and third-round rookie Chris Borland has been a godsend, but losing stars anywhere on defense has knock-on effects at every level. The 49ers were 24th in the league in sacks per dropback before this weekend after ranking 13th in the previous three years with Smith.

On Sunday, Smith played opposite impressive rookie Aaron Lynch at outside linebacker, and his teammates attested that his mere presence makes a difference. “He’s going to change up the way teams protect against you,” Justin Smith said. “It’s kind of like having that no. 1 receiver. You will roll coverage to him. You know they are going to roll the line toward him.”

Although it’s easy to get excited about the good things that will happen when a star player returns, it’s also reality that somebody has to leave the field to make room for Gordon and Smith. Ahmad Brooks started on Sunday, but was so unhappy about the 49ers reducing his snaps to accommodate Smith that he protested by … further reducing his own snaps. Most teams, though, will happily deal with whatever tiny issues arise if it means adding an elite player to the lineup.

Stakes are high across the NFL over the next six weeks. The 49ers play the Seahawks twice, while the Browns find themselves competing in a division so crowded that Sunday’s loss dropped the team from first to last place. Every contribution helps in tight playoff races, but adding a healthy All-Pro to the roster — that could make all the difference.

Are You Ready for the Big-Man Renaissance?

The Devils and Their Details: A New Second Nature for Duke Football