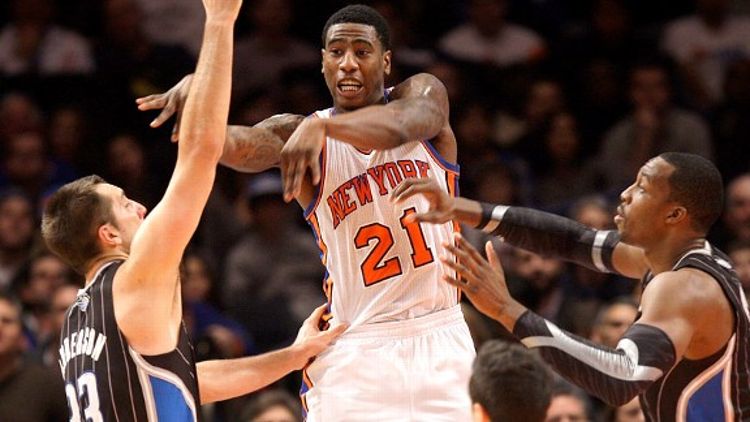 The Magic have just beaten the Knicks, and Dwight Howard’s in a good mood. Most of the Orlando players in MSG’s petite visitors’ locker room are strategically maneuvering orange towels while silently changing; meanwhile, Dwight’s riffing. The first target is Jameer Nelson, who just polished off a postgame Styrofoam platter of wings and fries and now can’t find his shower shoes. Howard offers a hand, ducking his head up to the top shelf of the 6-foot Nelson’s locker: “Oh, you can’t see ’em? Y’all got an apple box?” The assembled media scrum titters, and Howard moves on to one of the refs: “They need to send him to the D-League. He didn’t know what three seconds was. It’s when you’re in the paint for three seconds!” Then he spots ESPN’s news-breaking specialist Chris Broussard and rattles off an impersonation: “I talked to LeBron James … inside sources tell me … I just talked to Jesus and he said …”

And why wouldn’t Howard be feeling good? That’s what it’s like when you’re rolling. The Magic’s 102-93 win over the Knicks on Monday was their fourth straight, all of which came on the road. In the game before, Thursday night against Golden State, Howard went off for 45 points (tying a career high) and 23 rebounds. (And could have had more: Warriors coach Mark Jackson employed the Hack-a-Howard technique, and Dwight broke Wilt Chamberlain’s free throw attempt record while going a ghastly 21-of-39 at the line.)

Monday’s win brings the Magic to 9-3, good for third place in the Eastern Conference (behind the Bulls and … the Sixers?!). When you consider the cloud of Howard-trade chatter that follows the team, the season has rolled along surprisingly smoothly.

Against the Knicks, Dwight flubbed offensively. A big reason was a pumped-up Tyson Chandler managing to play Howard one-on-one without being trampled underfoot, with the occasional Knicks swarm helping out. But while he wasn’t scoring (3-for-6, good for eight points), Dwight did keep it together. Over and over he kicked the ball to the outside so that Orlando’s Terrifying Trio of Tall White Guys Who Can Pull Up for 3 at Any Time — Hedo Turkoglu, J.J. Reddick, and Ryan Anderson — could do their thing, to the tune of 17 team 3-balls. The strappingly goateed Anderson carried the day, going 7-of-13 from beyond the arc for a team-high 30 points.

The Knicks were actually leading most of the way, even with Amar’e Stoudemire playing limited minutes due to foul trouble, and looked ready to withstand the barrage of Magic outside shooting. The loudest squeals of the night came in the third, when Iman Shumpert stripped Earl Clark, raced down the court, and then dumped the ball behind his back to Carmelo Anthony, who finished with a wobbly layup. The suavely calm Anderson retorted with a 3, and then New York’s bench wunderkind, Josh Harrellson, re-retorted with a 3 of his own. (Things you need to know: Harrellson’s nickname is “Jorts,” because one time he wore jean shorts. Appropriately, whenever he does something good, the MSG JumboTron flashes the word “JORTS.”)

But New York’s defensive walls did not hold. In the fourth quarter, more action from the TTOTWGWCPUFTAAT — a banked-in 3 from Hedo, a four-point play from Anderson — gave Orlando a five-point lead with about four minutes to go. And then things got ugly for the Knicks: Toney Douglas and Carmelo took turns missing long jumpers and making awful passes, before a breakaway layup from Reddick sealed the deal. Ciara, Katrina Bowden, and Mike D, all watching dutifully from “celebrity row,” could do nothing to help.

Full disclosure time! This was my first NBA reporting gig (I’m usually over at the Downton Abbey-ier side of things here at Grantland), and I learned some things. Most importantly: The press boxes are kind of informally chopped up by status groupings, and the first-tier press box has free popcorn and Diet Coke. What was I doing in the first-tier press box, you ask? Good question! I accidentally went to the wrong one, obviously, and was very politely told to leave halfway through the first quarter when the reporter whose chair I was sitting in, and eating popcorn in, showed up. The even more polite old press-box caretaker guy explained to me where I was supposed to be sitting, and then I promptly went wandering in circles around MSG while sweating heavily under my winter coat. When I finally found my place during halftime, I learned something else: The Knicks hook you up with a fat media-notes packet that, among other things, tells you who the halftime performer is going to be. This is extremely helpful because, come on, if it’s not fat guys doing full-court layups, I’m out of there.

Which brings us back to the Orlando locker room, and the aforementioned assembled media scrum. Everyone stands around in the middle for a while, waiting for Dwight to put enough clothes on so that it’s not as awkward to shove a tape recorder in his face. A few other players — mostly Anderson, sporting a sort of woodsman-outdoorsy-chic look — are approached by the press. I talk to Big Baby Davis, thinking I could get some banter going about that time he shoved a young Magic fan in jubilation. He kind of brushes that aside, though, and we talk about regular basketball stuff. At one point he does say, “We got a looooooot more games to play,” comically stretching out the word “looooooot,” though that probably doesn’t translate very well written out. Meanwhile, the rest of the team just goes about their business unperturbed, and while I’m sure Larry Hughes couldn’t give less of a crap, decades of sports-movie watching have trained me to feel sad for the guys no one wants to talk to.

Stan Van Gundy gets chatted up outside the locker room, and flashes some irascible charm. On Anderson having a big night despite dealing with a cold: “I didn’t know he wasn’t feeling well. We’ll try to inject him with a virus [next game].” On Turkoglu picking up his game late: “Guys were just giving him a hard time in the locker room: ‘Hey, next time you don’t want to play in the first half, just let us know.’” On the efficacy of his zone defense: “Well, I’m one of the great zone coaches, and I think that’s been known in this league for a long time … I’ve coached 500-some games, and we’ve played about 18 or 19 minutes of zone? So I would say [the reason it worked was] probably shock value as much as anything.” And he closes with some trademark pessimism: “I’m not trying to put a negative spin on today, but I’m still not happy with our defense. It’s just not good enough, and if it doesn’t improve, we’re not good enough. I just looked: 39 days starting from today until the All-Star break; we play 24 games and we practice five times. So I don’t know how we’re gonna make it a whole lot better.”

Monday night, at least, everything was right for Orlando. The win left them near the top of the East. Their at-times petulant star seemed out-and-out happy. And Jameer Nelson, eventually, found his shower shoes.