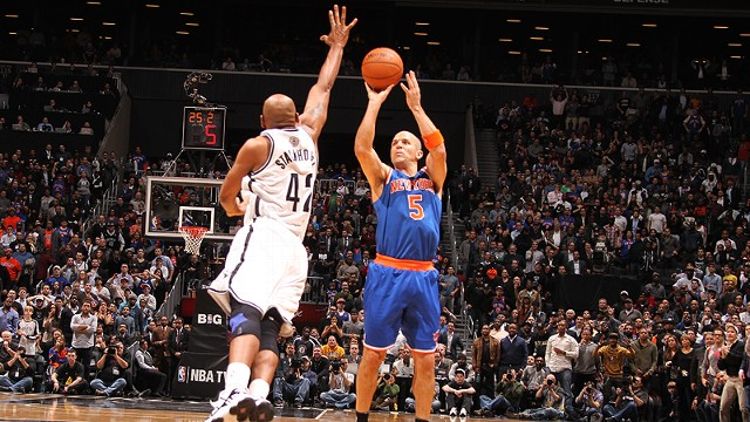 The Knicks are on pace to make history. The team is on track to break the record for most 3-point attempts in NBA history, and so far, they’re hitting a ridiculous 41 percent from deep. That number will come down; only eight teams have ever finished a season having hit 40 percent of their 3’s, and four of those teams played during the three-year stretch in the mid-’90s when the NBA used a shortened 3-point distance. AND when they hit an inevitable cold stretch, this will be among the two or three dominant discussion topics: The Knicks shoot too many 3’s, and they need to pound the ball inside!

And there’s truth to that. There is some evidence that teams that shoot a lot of 3-pointers are more inconsistent than teams that shoot a “normal” amount; their success, to some degree, is dependent on a shot that doesn’t go in as often as other types of shots, and so they are perhaps more vulnerable to significantly lower point totals on cold shooting nights. New York’s 3-happy strategy naturally results in fewer free throws, the most “consistent” shot type in the league; only nine teams get to the line less often, per shot attempt, than New York.

But it’s hard to argue this is really a problem — they have the best offense in the league, after all — or that the Knicks are doing anything unprecedented.

New York, by any measure, is taking a ton of 3’s. Just over 35 percent of their field-goal attempts have come from deep, and that would be the highest such share in NBA history. It’s tempting to chalk that up to New York’s slow pace of play. Only four teams average fewer possessions a game; fewer possessions means fewer shots, which in turn means all of New York’s 3’s would naturally take up a huge chunk of its overall shot attempts. But two things counteract that: The Knicks rarely get to the line, and they’re on pace for the lowest turnover rate in NBA history. The net result is an average number of overall shot attempts, meaning that 35.2 percent 3-point share — that record 35.2 percent share — is really meaningful.

The Knicks are a product of the league’s evolution, and their 3-point numbers, while outliers in some respects, fit snugly within that evolution. There’s consensus now that the 3 is a powerful and necessary weapon against shifting defenses that can use zone principles to overload the strong side of the floor. The average team has taken 20.1 3’s per game this season, compared to 14.6 a decade ago and about 10 per game in the early 1990s. The Knicks have attempted about 1.45 times this season’s average, or about 45 percent more 3’s than a typical team. The mid-1990s Rockets, often cited as perhaps the first NBA team to embrace the 3 as part of an inside-out attack, attempted 1.58 times more 3’s than the average club in 1993-94 and 1.4 times as many the next season. Other teams trailed them fairly closely, and ratios in the 1.4 range have been common for the league leader in 3-point attempts — and sometimes the top two or three in that category — in most seasons since then.

In other words: The Knicks are jacking a ton of triples, but they really aren’t that different from some very good teams that came before them. The combination of so many 3’s and so few free throws might be problematic, but it’s not atypical — one can lead to the other — and the Knicks make up for the free throw disparity by holding onto the ball.

When I asked head coach Mike Woodson before last night’s Lakers game if the record pace concerned him, he admitted he wasn’t aware of it. “I didn’t even know,” he told reporters during his pregame press session. “I don’t care. You just gotta make ’em.”

Another reason not to worry: New York is generally getting really good looks from outside, owing mostly to the development and health of Carmelo Anthony and Tyson Chandler. Anthony has embraced the power forward role and the post-up responsibilities that come with it. When opponents guard him with a traditional power forward, he is using his quickness edge to drive hard to the hoop. When opponents hide their power forward on Ronnie Brewer or Jason Kidd, and use their small forward to check Melo, Anthony is taking his guy to the block and posting up aggressively. Melo has finished 18.3 percent of his offensive possessions via post-ups this season, up from 12.5 percent last season, and he has shot 51 percent and drawn a ton of fouls on those plays, per Synergy Sports. He’s also passing out of the post more often, and as I’ve written before, he has shown real skill in reading defenses and finding the open man in the best position to inflict immediate 3-point damage.

Chandler has supplanted Dwight Howard (at least the current version) and Amar’e Stoudemire as perhaps the most devastating pick-and-roll finisher in the league, and he has somehow done so without a single reliable post move or the ability to do much of anything when he catches with his feet on the ground. The mere threat of Chandler dunking a lob sucks in defenders from all over the perimeter, opening up spot-up chances for everyone. The work Chandler put in to transform, mid-career, into a steady 70-plus percent free throw shooter has been crucial in that regard; teams can’t simply wrap him up and hope for the best. Jason Kidd’s presence as a second quarterback has also been huge; no one is better at reading defensive rotations from behind the arc and rifling a pass to the shooter those rotations are about to leave open.

High-speed pick-and-rolls with shooters spread all over the floor sounds a lot like former coach Mike D’Antoni’s system, and Woodson said before the game he has indeed swiped some of his predecessor’s philosophy. “I’ve used a lot of Mike’s system,” Woodson said, “but I’ve obviously tried to expand it to other things I like to do.”

About 24 percent of New York’s possessions have resulted in spot-up chances, the third-highest mark in the league, and they lead the NBA in points per possession on those chances. (New York ranked just 16th in that category last season, per Synergy.) Melo himself has been a primary beneficiary; he is shooting 51 percent on about four catch-and-shoot chances this season after shooting just 36 percent on 2.9 catch-and-shoots last season, per Synergy. Using Anthony at power forward has forced defenses into awkward matchups that are, in some cases, different from the matchups that occur when the Knicks’ opponents have the ball. That leaves those opponents scrambling to find the right players as the Knicks transition to offense, and the Knicks have gotten open 3-point looks out of that confusion.

The numbers are even more dramatic if we zero in on games tracked by the fancy SportVU camera system STATS LLC has installed at 14 NBA arenas, including Madison Square Garden. In 26 tracked games last season, Anthony shot 27-of-78 (34.6 percent) on catch-and-shoot chances, according to a report STATS supplied exclusively to Grantland. He’s already beaten that in 11 tracked games this season, having shot 28-of-51 (55 percent) entering Thursday’s game against the Lakers.

He’s shooting fewer off-the-dribble jumpers and more open ones, as are the Knicks as a whole; Synergy has classified 62 percent of New York’s jumpers this season as unguarded, up from 58 percent last season.

In short: The 3’s are the healthy result of an inside-out attack built upon two legitimate All-Stars and an army of shooters around them. But back to the two problems allegedly threatening New York now:

• The 3’s will stop falling at such a high rate.

• Stoudemire is going to return soon and take some of Anthony’s power forward minutes, and maybe even start.

I asked Woodson about three weeks ago if he could possibly start Stoudemire if the Knicks were something like 17-3 upon Stoudemire’s return. He rightfully called that speculation, but here are the Knicks, at 17-5 and still waiting on Amar’e. Woodson has no choice, and I suspect he and the Knicks know this now: Stoudemire has to come off the bench.

And guess what? The 3-point data, like just about all the other available data, bolsters the argument for Stoudemire as a $100 million sixth man.

The Knicks are dramatically less efficient on offense when either Anthony or Chandler hit the bench. That’s not a surprise. Here’s the interesting part: They shoot more 3’s per minute when one of those guys sits, and they hit a lower percentage from deep. The Knicks have shot 28 3-pointers per 48 minutes with Chandler on the floor and hit 42 percent of them; they jack 31.7 per 48 minutes when he sits, but their percentage drops to a (still excellent) 39.8 percent, per NBA.com. With Anthony: 28.2 3-pointers attempted/43 percent accuracy. Without Anthony: 31.3 attempts/38 percent accuracy.

And in 211 minutes when both Anthony and Chandler sit, the Knicks’ 3-point percentage has plummeted to 34.2 percent — and that comes after a hot 6-of-11 performance in such minutes against an embarrassingly listless Lakers defense on Thursday. For example: New York’s sixth- and seventh-most commonly used lineups this season (about 50 minutes combined, a tiny sample) include neither star, and both are scoring at a rate that would rank around dead last overall in points per possession, per NBA.com. Both are doing so while tossing up a ludicrous 40-plus 3’s per 48 minutes and generating close to zero free throws.

Stoudemire fits all of this like a glove. Lineups lacking one or both of the Chandler/Anthony duo just don’t have enough inside presence or dribble penetration to create looks for the rest of New York’s roster, heavy on spot-up guys and low on off-the-bounce creators. Stoudemire’s pick-and-roll game is the perfect answer, and the Knicks have a floor-spacing center in Rasheed Wallace to pair with Stoudemire so that Amar’e doesn’t have to be the lone big on the floor defensively. Bringing Stoudemire back to his pick-and-roll roots without Melo and Chandler around to take up space will also generate more free throws.

Look: It’s impossible for Woodson to stagger all the minutes perfectly, and he doesn’t have to. Stoudemire can play center against a lot of teams, and Anthony has shot the ball from outside well enough to work as a spot-up threat around Stoudemire pick-and-rolls. Stoudemire and Chandler can function well together in the right lineup combinations.

But the Knicks were miserable offensively last season when all three shared the court, and the interior dominance of Chandler and Anthony during Stoudemire’s absence has only highlighted that. The area below the foul line has room for only so many people, and trying to use Amar’e as an outside shooter off screens last season had a square peg/round hole feel to it. Woodson has done an extraordinary job balancing egos and getting the most out of everyone, and he should be able to manage this decision correctly.

For all the focus on offense, the bigger challenge might come on the other end. New York has slipped to 15th in points allowed per possession, and Stoudemire is only going to hurt in that regard. The record-setting 3’s are fascinating, but it’s unlikely they’ll be New York’s undoing. A mediocre defense might be.