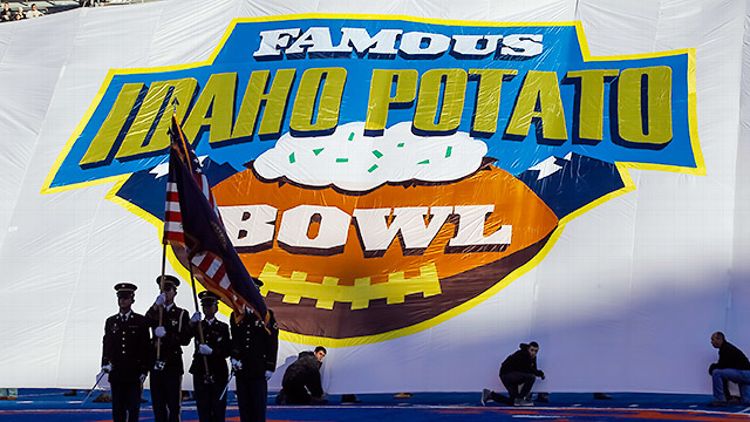 On today’s itinerary: What you missed if you skipped the first day of bowl season, plus looking ahead to the games of pizza, pineapple, poisonous houseplants, and Pirates.

What You Missed While Living Your Saturday Out in the World, Like a Person

What should we have expected, then, other than what the 2013 edition delivered, with Wazzu leading 45-30 at the three-minute mark in the fourth quarter and trailing 48-45 on the final scoreboard? A game that opened with two turnovers in the first three offensive plays and saw four more before it was over? A contest that came five yards short of totaling 1,000 combined yards of offense, with CSU’s Kapri Bibbs rushing for 169 yards and three touchdowns, including a 75-yarder, despite turf toe? Negative-10 rushing yards for the Cougars! A blocked punt! Two consecutive strips by Shaquil Barrett that killed off what ended up being Wazzu’s last drive! A Statue of Liberty play on a two-point conversion! An assistant coach verbally abusing an opposing player on camera! A 41-yard game-winning field goal from the most accurate kicker in program history! STOP SKIPPING THE NEW MEXICO BOWL. IT IS NEAT.

• Las Vegas Bowl: No. 25 USC 45, no. 20 Fresno State 20. Hailed as the most compelling unit matchup on Saturday’s slate, the “battle” between Fresno’s aerial offense and USC’s pass defense barely wound up deserving the term. Derek Carr, in his final game in a Fresno jersey, had a very bad day (by his standards) against a very good opponent (by anybody’s), going 29-for-54 for 216 yards, two touchdowns, one pick, and a pile of missed opportunities and connections. Star Bulldogs receiver Davante Adams recorded just 73 yards. Enjoying a markedly better afternoon was Marqise Lee, who went out in style, if this does indeed prove to be his last collegiate outing. Lee rolled up 118 yards and two touchdowns, including this nimble skip. The Las Vegas Bowl’s marquee quarterback performance wound up coming from USC’s Cody Kessler, who completed 22 passes for 345 yards, four touchdowns, and an interception. Most of the meaningful aerial yardage that didn’t go to Lee went toward Nelson Agholor, whose hands you should watch here:

All told, it was a fine afternoon in Vegas, with a sellout crowd, plenty of points, and a jump to take a commanding lead in unsettling bowl commercials.

• Potato Bowl: San Diego State 49, Buffalo 24. All Americans probably should have gone to the Potato Bowl, if only to take home an official game program:

What we missed in terms of football was a mere mauling, mostly — and Muema, Muema, Muema. San Diego State’s diminutive back Adam Muema totaled 229 yards on 28 carries, with three scores, including this long run of 30 yards:

Almost half of Buffalo’s points came in a quick second-quarter stretch, the other half in the fourth quarter after hope of reclaiming the lead had evaporated. The Aztecs might have enjoyed a wider margin of victory if not for several possession-ending miscues, but they were outpaced in bumbling by the Bulls, who seemed determined to make a game of it midway through the second quarter before giving up a three-minute touchdown drive, throwing an interception on the third ensuing play from scrimmage, and surrendering another SDSU touchdown on the play right after that. That 28-10 deficit ballooned to 42-10 by the start of the fourth quarter, at which point Buffalo began scoring again in an attempt to salvage a respectable loss, helped by two touchdowns and not at all helped by this.

• New Orleans Bowl: Louisiana 24, Tulane 21. Not to get overcome with emotion before we’re even into the New Year’s Day offerings, but this kind of game really is a credit to the bowl season. Not even necessarily in terms of the level of play from both teams, but in terms of the experience of seeing two area squads, a big crowd, two starting quarterbacks battling injury, a presumed thrashing turning into a tight game late, and a heartbreaker of an ending.

The Cajuns’ Terrance Broadway, who seemed less likely than Tulane’s Nick Montana to start, outlasted his Green Wave counterpart both in playing time and creative interception execution; Montana got pulled early for Devin Powell, who turned in a 10-for-21, 223-yard performance and a pass to Ryan Grant that you simply must watch:

But the offensive star of the game was the immaculately named Orleans Darkwa, who ran for two Tulane touchdowns in the waning minutes of the first half and another at the end of the third to tie the game at 21-all. A Hunter Stover field goal early in the fourth gave the Cajuns a three-point lead, and on third down with time on the brink of expiring, Tulane turned to one of its most reliable weapons, 2012 Groza Award–winning kicker Cairo Santos … who missed a 48-yard game-tying attempt, wide left. The win marked Louisiana’s third consecutive New Orleans Bowl victory.

• December 23 Beef ‘O’ Brady’s Bowl: Ohio vs. East Carolina. Neither team comes to St. Petersburg with much holiday cheer in its heart, and not because these squads are about to spend an afternoon in the ill-lit confines of Tropicana Field. The Pirates were cruising to the Conference USA championship game before being cut down in a hail of touchdowns at Marshall; the Bobcats, last season’s MAC “It” Team, started the season 6-2 but suffered a three-game November losing streak in which they were outscored 123-16. Ohio had better get over whatever caused its late-season funk, and quickly — the secondary has been vulnerable to efficient passers, and ECU’s Shane Carden, who has racked up 3,866 yards and a completion rate above 70 percent, appears likely to stage one hell of an indoor fireworks display.

Of course, it wouldn’t be the Bouffant Bougies’ Bowl without our annual Beefing Brady’s Menu Quiz, the purpose of which is to determine which is an actual current or former Beef ‘O’ Brady’s menu item and which merely sounds like it really, really could be.

The Beef ‘O’ Brady’s Bowl, with all of its attendant weird apostrophes, kicks off at 2 p.m. ET, with coverage on ESPN and WatchESPN.

• December 24 Hawaii Bowl: Boise State vs. Oregon State. It’s been a while since Boise State was the kind of team that could be satisfied with an 8-4 season. The Broncos would do well to avoid mooning over past glories — or former coach Chris Petersen, who finally made his long-anticipated jump to a major conference a few weeks ago — and instead concentrate on tightening up their aerial defenses against Oregon State’s Sean Mannion and Brandin Cooks, who form one of the nation’s most prolific QB-WR tandems. Mannion’s bolts could use some tightening as well; in the back-loaded weeks of the Beavers’ season, he emerged with a 7:11 TD:INT ratio over the final five games.

Say this for State, however: The Beavers at least get to dance with the one who brung them. Boise is once again without the services of starting quarterback Joe Southwick, who missed a big stretch of the late season with a broken ankle and has now been sent home from the islands for the Ever-Popular-and-Mysterious Violation of Team Rules. As of this writing, the current temperature difference between Boise and Honolulu is 40 degrees: It’s 39 in Idaho, 79 in Hawaii.

And now, another potent reminder of just how little we know in August of what the season will bring: Oregon State began its 2013 campaign with a home loss to an FCS team, ended it with a five-game Pac-12 losing streak, and is currently very much worthy of our envy:

The Hawaii Bowl kicks off at 8 p.m. ET, with coverage on ESPN and WatchESPN.

• December 26 Little Caesars Bowl: Pittsburgh vs. Bowling Green. Oh, the delicate equilibrium of the mid-majors’ existence: Bowling Green’s reward for upsetting a ranked Northern Illinois team and staging a three-touchdown victory in the MAC championship is … spending Christmas in Detroit and waving farewell to head coach Dave Clawson as he bolts for the Wake Forest job. On paper, at least, the Falcons should contain the Panthers on the scoreboard and amass some impressive numbers behind one of the FBS’s better rushers in Travis Greene; the redshirt sophomore has rolled up 1,555 yards at 6.0 per carry and finished the regular season with five straight 100-yard games. Pitt doesn’t have that kind of firepower on offense, but will be looking to give all-everything defensive tackle Aaron Donald a resounding final victory — and may have the edge in motivation simply from knowing it won’t be spending a fourth consecutive bowl season in Birmingham.

The Little Caesars Bowl kicks off at 6 p.m. ET, with coverage on ESPN and WatchESPN.

San Diego is one of bowl season’s better destinations, but with both of these teams coming off losses in their respective conference-title games, we can forgive the players for looking a little bummed as they stepped off their charter planes into the Southern California sunshine. Don’t let that or the late kick deter you, though, from checking out the final college performance from NIU’s Jordan Lynch, who’s going against one of the staunchest defensive challengers he’s seen as a Huskie. With 5,993 passing yards and 4,304 rushing yards over the course of his career, Lynch owns just about every college-QB rushing record the NCAA keeps on the books; he set the single-game rushing record for a QB with 316 yards against Central Michigan, then broke it just five weeks later with 321 against Western Michigan.

Utah State fans might be gazing wistfully across the field at Lynch, as their own QB, Chuckie Keeton, was rolling up impressive numbers with both his arm and his legs before tearing two knee ligaments against BYU. But despite all that might have been, let’s have a round of applause for the Aggies: Under a first-year head coach, and without Keeton for most of this season, Utah State still won its division. And the Aggies’ defense could be the difference-maker in this contest; NIU is averaging 6.58 yards per carry on the ground, but State is allowing just 2.8. The Aggies gave up 24 offensive points to Fresno State, 12 to San Jose State, 7 to Wyoming, and shut out Colorado State.

The Poinsettia Bowl kicks off at 9:30 p.m. ET, with coverage on ESPN and WatchESPN, and may cause vomiting in pets.

The NBA's Possible Solution for Tanking: Good-bye to the Lottery, Hello to the Wheel