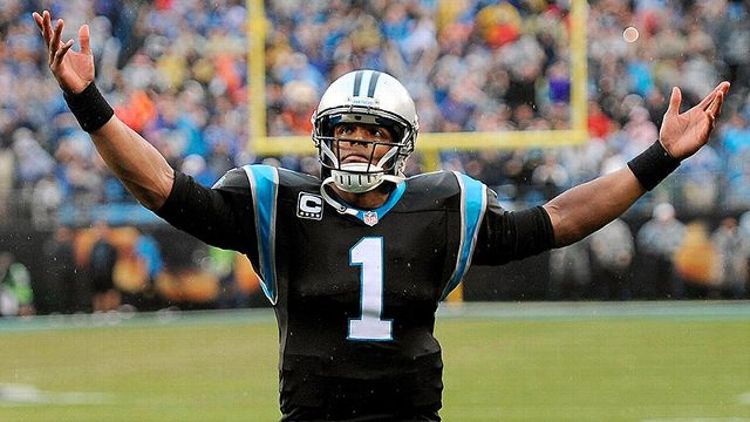 The Panthers: It’s impossible to pick a singular hero from Carolina’s best win in five years. At various points in this game, Greg Hardy, Thomas Davis, Luke Kuechly, and Cam Newton was each the biggest winner in this one, which is how a franchise-altering game probably should be.

Hardy added three more sacks (he now has 11) as the Panthers took advantage of rookie third-round pick Terron Armstead, who was starting his first game at left tackle, but Carolina’s ridiculous defensive effort against Drew Brees was a collective one. The Saints have been a mediocre offense on the road this year, but aside from Robert Quinn’s battering of Brees last week, they still don’t allow a ton of pressure. Carolina sacked Brees six times, hit him twice, and generally dominated New Orleans up front. Add that to Davis’s incredible interception (an exclamation point on what’s been an excellent season) and Kuechly’s dominance (the 24 tackles were partially the result of an overexcited home scorer, but the point stands: He was everywhere), and you have maybe the best defensive performance of any team this season. On the other side of the ball, Newton was unspectacular for a majority of the afternoon, but when it mattered most, he was there with a handful of incredible throws.

Carolina is one win against the bottom-up Falcons from taking the NFC South and enjoying a first-round bye — after starting the season 1-3. The Panthers have been one of the more fun stories of this entire season, and now, the Carolina-Seattle game that feels like the right way to settle the NFC is very much in play.

LeSean McCoy: Anyone who’d watched the Bears’ run defense this year knew this was going to be bad, but this was carnage on a different level. McCoy averaged 7.4 yards on his 18 carries, but it felt like twice that. Typically, a 133-yard day like McCoy’s will include a 40-yard run that inflates the overall total, but last night, his longest run went for 19 yards.

This really was McCoy just ripping off 10-yard gain after 10-yard gain against a defense that looked impossibly helpless. With Dallas and a must-win game looming next week, McCoy is all but assured of the rushing title now. I wouldn’t be surprised if he has a picture of Chip Kelly on his nightstand at this point; no one is happier for life in this offense.

The Packers: I didn’t know how, but I did know it would come to this. One way or another, Detroit would screw things up, and the Packers would have a chance to win the NFC North, and it would be against Chicago in Week 17, and Aaron Rodgers would somehow be involved, and Bears fans everywhere would hate everything.

The treatment of Rodgers’s injury on Wisconsin TV last week was like constantly updating coverage of a hostage crisis. It makes sense, I guess. He’s in every single commercial up there, so the actual programming might as well include a 24-hour Aaron Watch too. I can’t really blame Packers fans, either. With how weird this season has been, the idea that Rodgers and Randall Cobb could come back in the playoffs and string a couple of wins together isn’t that out there.

Robert Quinn: “I’m anxious to watch the tape because I want to see — with some of the things we had in place — how the heck they didn’t slow them down more than they did. We’ve got to find out why.”

That’s Greg Schiano searching for answers about how Robert Quinn decimated his team almost single-handedly. Quinn had three more sacks to bring his total to 18 on the season, had four quarterback hits overall, and generally made Mike Glennon’s life a waking nightmare. At one point after the game, the Bucs’ team doctor had to check Glennon’s pulse — really.

Quinn was the front-runner for Defensive Player of the Year coming into yesterday, but now, it really would approach a full-on travesty if he didn’t win it. The Rams aren’t making the playoffs, and they’ve played in one prime-time game all season, but none of that should matter. He’s been unreal.

The Cardinals: The team that lost 58-0 last season is the first team to beat the Seahawks in Seattle in two years. Sure, makes sense.

Carson Palmer did what he could to give this one away, but the Cardinals’ defense was just too good to let that happen. Earlier, I said Carolina’s defensive performance against the Saints may have been the best of the year by anyone, and it’s because what Arizona did on the road in Seattle is right up there. Not many guys deserve to even be in the conversation with Quinn for DPOY, but one of them is Calais Campbell — the best player on the second-best defense in football (according to DVOA). Campbell added two more sacks to what has been maybe his best season. Arizona still needs some help to get into the playoffs, but it is possible. If it doesn’t, I say this is the year we start up a petition to get the Cardinals into the sixth spot in the AFC. No one seems to want it, and more than that, no one actually deserves it.

Anyone who loves high-stakes football but has no emotional investment in any of the teams involved: It’s unlikely, but if the 49ers lose tonight, we would have three win-or-go-home Week 17 games for our enjoyment next week. Dallas’s win yesterday all but ensured the Eagles and Cowboys would be playing on Sunday night (no one can turn down the possibility of a prime-time Cowboys meltdown), but the Packers and Bears will also be playing for their playoff lives. For any impartial observer, next Sunday should be one of the more enjoyable Week 17s we’ve had in a while. For anyone who roots for one of these teams (including me), it should be excruciating, and I already can’t wait for it to be over.

Ryan Tannehill: The fourth quarter of the Bills-Dolphins broadcast was pretty much a loop of the “Ryan Tannehill gets slammed into the ground” montage. As a team, Miami laid a massive egg in a game it needed to win against a former practice squad quarterback, but the play of the Dolphins’ offensive line was a special kind of awful.

The result wasn’t all that surprising — the Bills lead the league in sacks, and no one has given up more than Miami — but actually watching it happen was still sort of crazy. Buffalo hit Tannehill 10 times in all, including a shot from Kyle Williams late in the second half that I don’t know how Tannehill actually got up from.

After this week, it seemed like Tannehill’s play and the uninspiring group of teams collected at the back of the AFC playoff race might be enough for the Dolphins to sneak in. But it’s difficult for an offense to lean on its young quarterback when he’s spending most of his day climbing out from Ryan Tannehill–size indents in the turf.

Any remaining shred of dignity for the Bears’ defense: Watching this game with a collection of Bears fans was probably for the best. At a certain point, everyone would just start laughing when McCoy made his way into the secondary for another 15 yards. We needed to, just to keep from crying.

What the Bears have done against the run in the past 10 weeks approaches the absurd. Starting with Brandon Jacobs running all over them in Week 6, here are the rushing totals the Bears have given up in their past 10 games: 123, 209, 199, 145, 174, 258, 246, 198, 93, and 289. Part of me is disappointed the Browns were part of that stretch. Giving up 100 yards rushing in 10 straight would be a pretty special achievement. I don’t know how that even happens, aside from linebackers actually running away from ball carriers. Actually, I’m pretty sure that’s happened too.

And, because this is the NFL in 2013, this team is still one win from the playoffs. Bear Down!

The Ravens: If giving up 41 points to Tom Brady and his receiving corps of elves wasn’t enough, LeGarrette Blount desecrating Ray Lewis certainly was:

Dan Snyder: There were three images from yesterday’s afternoon of football that more or less sum up the 2013 Washington football team. The first was a graphic from the Rams’ win over Tampa Bay, listing all the players St. Louis has taken with the haul from the Robert Griffin trade (with a note at the bottom about the 2014 top-five pick still to come). The second was Griffin, whom a year ago everyone in America thought was worth that haul, sitting in sweatpants an earpiece on the sideline.

And the third was Daniel Snyder, complete with mustard yellow watch, watching his kingdom finally finish crumbling. I wonder what Snyder is getting James Dolan for Christmas.

Jim Schwartz: Last month, when the Lions beat the Bears in Chicago and Scott Tolzien was playing quarterback in Green Bay, one of the reasons everyone was convinced Detroit was the favorite in the NFC North was its impossibly soft late-season schedule. With home games against Tampa Bay, Baltimore, and the Giants, even the Lions couldn’t screw this up! Obviously, those same people aren’t familiar with the Lions.

Detroit went from an inside playoff track two weeks ago to being kicked off the “In the Hunt” section of the playoffs graphic that follows us around this time of year. That’s impressive, considering I’m pretty sure that group has featured about 28 teams, including Florida State and Auburn, at some point.

It’s hard to imagine how the Jim Schwartz era in Detroit continues, but at least we’ll always have the memories — of personal fouls, botched challenges, ill-timed Matthew Stafford interceptions, and belligerent indignity. I don’t even know what this team would look like with a different coach, which in this case is not a good thing.