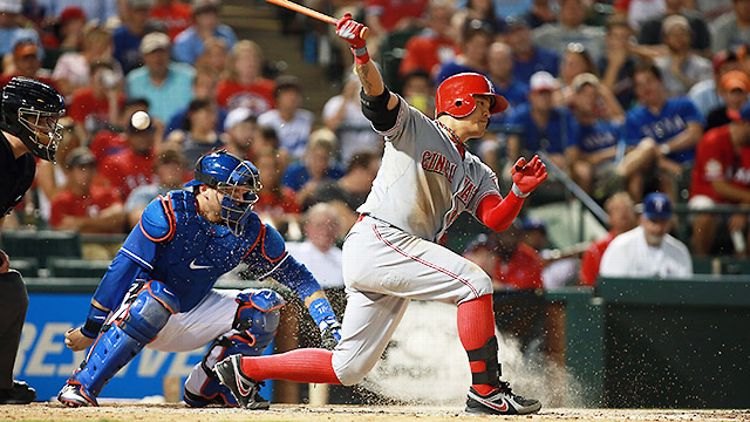 The Texas Rangers signed Shin-Soo Choo to a seven-year, $130 million contract over the weekend, adding a player who’s a perfect fit for a team that now looks like a strong 2014 playoff contender.

Though hitter-friendly Rangers Ballpark partially obscured it, Texas fielded a lousy offense in 2013. Down years for David Murphy and Elvis Andrus, a suspension for Nelson Cruz, and the failed Lance Berkman gambit combined to produce just the ninth-best offense in the AL on a park-adjusted basis. A team that had become known for its pitching and defense entered the winter needing to add some impact bats, preferably from the left side.

Choo fills that need. Over the past five seasons, he’s been the 18th-best hitter in all of baseball on a park-adjusted basis, right there with the likes of Robinson Cano and Evan Longoria. Strip out a disastrous 2011 campaign that included three trips to the disabled list, thumb surgery following a hit-by-pitch, and a drunk-driving arrest, and Choo has appeared in 144 or more games in four of those five seasons, posting on-base percentages of .373, .394, .401, and .423. That .423 mark, which Choo delivered in 2013, was the fourth-best in baseball, trailing only superstars Miguel Cabrera, Joey Votto, and Mike Trout. It stemmed in part from Choo’s walk rate, which was the second-highest in the league, and also Choo’s extraordinary ability to get plunked.

Choo has also shown ample power outside of that 2011 season, averaging 20 home runs and 37 doubles a year in his four other full seasons, numbers that should play well in Arlington’s offense-boosting heat. Those stats actually understate Choo’s dominance against right-handed pitching: Only Chris Davis and David Ortiz were more productive against righties last season, and only Votto, Cabrera, and Prince Fielder have hit righties better since 2009.

Choo is already 31, and he’ll be 38 when this deal concludes. The contract is also the sixth-richest given to an outfielder in MLB history. Like Robinson Cano’s 10-year, $240 million deal with the Mariners, Choo’s terms will probably end up looking like an overpay when we examine his total production over the life of the deal. But as with Cano, we need to rethink what constitutes a good or bad value … in fact, we need to rethink the whole concept of value. A good deal for the Pittsburgh Pirates isn’t the same as a good deal for the Texas Rangers. The Mariners, who make more than $100 million a year on their local TV contract and have spent modestly on payroll in recent years, have plenty of room, and plenty of motivation, to sign a top-10 guy who’s the best available free agent on the market. The Rangers, who make $150 million a year from their local TV contract, just missed the playoffs for the first time in four seasons and had a major hole in left field as well as a burning need for a left-handed bat with a high-on base percentage atop the lineup; they’ve now signed the best hitter remaining on the market with Cano gone. They don’t need to sweat the 2020 hypotheticals too much.

The dual acquisitions of Choo and Prince Fielder, combined with last summer’s Alex Rios pickup and the continued presence of the always great Adrian Beltre, give the Rangers a solid big four to complement a dynamic rotation led by Yu Darvish, Derek Holland, and improving lefty Martin Perez, and a bullpen that should be well armed even with Joe Nathan gone. As Ken Rosenthal reported, the Rangers shifted $5 million in Choo earnings from 2014 to the final two years of the deal, giving them a bit more wiggle room to round out next season’s roster. Adding another starting pitcher would help, since it would take pressure off Matt Harrison and Colby Lewis (who are coming off injuries) and Alexi Ogando (whose repertoire and results suggest he might have trouble consistently pitching deep into games as a starter). Signing Ubaldo Jimenez or Ervin Santana would sting less now, since the Rangers already sacrificed their top draft pick as compensation for signing Choo.

Given the money the team has already spent on Choo, however, adding another less expensive position player might be more realistic than adding one of the top remaining free-agent starters. Specifically, the team should sign someone who could DH a bunch and maybe make a few spot starts at first, serving as an upgrade over Mitch Moreland (.232/.299/.437 in 2013) and a hedge in case the newly acquired Michael Choice isn’t ready to be a quality everyday player in the big leagues. Given the dwindling number of teams in need of a starting first baseman and the small number willing to sacrifice a first-round pick to sign a good hitter who offers no other notable skills, the Rangers might want to get Scott Boras back on the line to inquire about Kendrys Morales. If the Rangers sign Morales, they could defray some cost and grab some additional talent by trading Moreland.

Every other AL team looks like it has either brought back a similar collection of talent or improved, so there’s no reason for the Rangers to stop now.