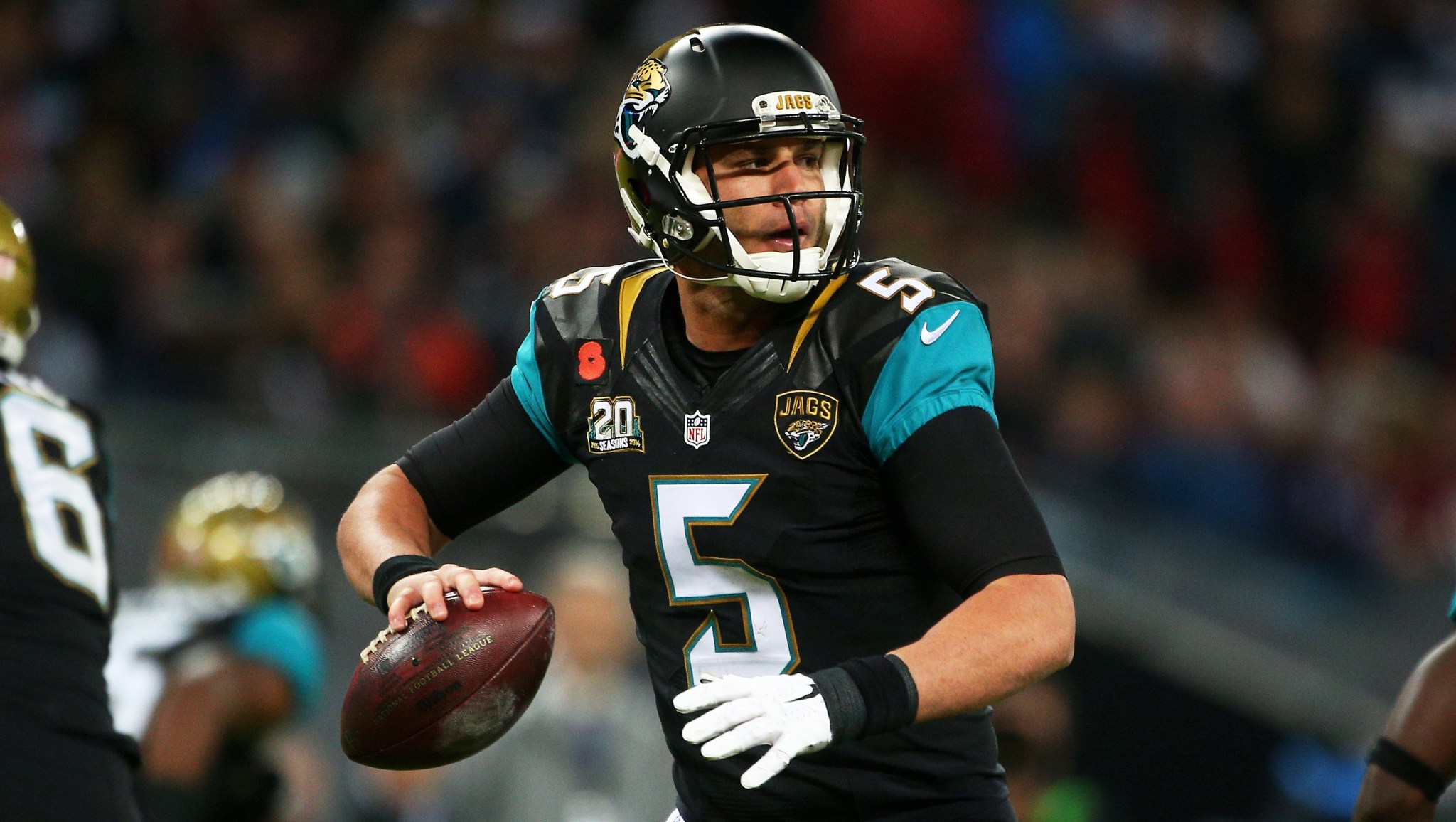 There are a few inexplicably cruel things this world offers us. Having to wait while three-quarters of a gallon of water pours out of a ketchup bottle before you see any ketchup is one. Sitting for a two-and-a-half-hour holiday school concert because your 9-year-old son is “in charge” of lighting is another. And the third is being forced to watch the Jaguars play the Titans in a Thursday-night affair. That’s it. Just three.

Actually, I can explain the third one. I say “forced to watch” because we degenerate gamblers must indulge and find a way to make a buck no matter what crapball matchup the NFL presents us. That said — if you’re playing in your fantasy football finals and you have anyone in your starting lineup associated with this game, you deserve to lose by 75 points.

It was difficult for me to put together 1,100-some odd words about this game. Finding actual statistics to support my terrible prop picks are harder to find than a Bill Cosby supporter.

Here’s one: The Jaguars are 0-0 as a home favorite since 1996. I exaggerate — they’ve only been an underdog for the past 42 games. That’s a real stat.

This is what we’re up against. So with that in mind, let’s move on and move through this Thursday-night nightmare …

Remember when these two teams played earlier in the year and Storm Johnson opened up the scoring by capping a seven-play, 80-yard drive with a 1-yard touchdown run? Me neither. 5,000 jermajesties

I’m calling it now … 2-0 final. And those two points somehow come by virtue of a couple PATs with no touchdown. A safety is asking too much from either of these defenses. 2,000 jermajesties

Asking either of these teams to score a long touchdown is like asking your dog to sink a long putt. Why do I get the feeling we’re in for a three-hour leg-humping tonight? 5,000 jermajesties

I’m kicking myself for not jumping on last Thursday’s “no TD scored” prop, which paid out 100/1. This week that same prop carries lower odds, basically because a pick-six could occur at any time. Even halftime. I think I’m covered pretty well here. 1,000 jermajesties each

Over/under 9.5 minutes into the Titans/Jaguars game before either broadcaster — Jim Nantz or Phil Simms — nudges the other for nodding off

All right, Sal — we get it. The game is going to suck. Move on already. And quit calling yourself Sal. It’s obnoxious in a Real Housewife–y sort of way.

This should be over. Way over! Dinkmeyer collected a million dollars from a fantasy football site on Monday when Wilson caught the first touchdown of his career. It’s getting weird when a fantasy football player can make 10 times as much money as the actual NFL player who earned him his big payday. It’s also weird that ANYONE in the country would have Marquess Wilson in their fantasy lineup at any point in the season. And it’s even weirder that a man is roaming the earth with the name Drew Dinkmeyer. A lot of weird stuff here.

Just in case you weren’t glued to that gem, Walker was the last player with the ball after a series of chaotic laterals during the final frantic play of the game. There was no time on the clock and the Titans needed to score to win, but for some reason, rather than throw the ball back one more time to … let’s say … anyone … Walker elected to get tackled at the 9-yard line. Maybe Walker — like the rest of us — just wanted the miserable game to end.

Let me say this: If you inserted me into an NFL game, I would prove to be an embarrassment on all levels. Except for the part where I had to lateral the ball back to a teammate in a final desperate play of a game before getting tackled. Oh and pregame coin-flipping. I’d be real solid at that, too. I’d call the right side at least 35 percent of the time.

I’ll put my jermajesties on Alex Smith the receiver. Although I have a feeling at this point that if Dwayne Bowe had a chance to throw the ball, he’d aim right for Smith’s manhood.

Bacarri Rambo: name of the strong safety for the Buffalo Bills who intercepted Aaron Rodgers twice last week (-225) over the name of a cologne my agent, James “Baby Doll” Dixon, continuously douses himself with so people can’t tell when he’s smoking

“Two packs a day? Baby, I go through two lighters a day.” Baby Doll wasn’t close to making this joke up, but it still cracks me up every time.

I actually just picked the last sweater lint out of his mustache this morning, so the over wins in a big way.

@BillSimmons @TheCousinSal has there ever been a better 5-team teaser than Miami, Seattle, Green Bay, philly and buffalo for this Sunday?

Five teams might be a little ambitious, Justin. But if you were to keep it simple with a 10-point, three-teamer with Seattle, New England, and Green Bay, you and your significant other can pick out the most expensive tennis bracelet in Zales without even having to watch the games.

Love how @TheCousinSal on @BillSimmons gleams about the Cowboys….and then 3 hours later its revealed that D.Murray broke his hand #lol

More like three minutes later. But it looks like he’s going to play and we’ll probably beat the Colts handily and then lose to the Redskins, who will have just lain down for the Eagles so who’s LOLing now? Oh … still you.

@TheCousinSal you are a absolute idiot when it comes to picking football games! Do you even think before you speak????? #whyareyouonESPN?

Connor, you hit it on the head when you said I don’t think before I speak. I have to stop doing that — all I have is an undefeated streak of four weeks to show for it. (Also 10-3-1 against the spread with my best bets this year.)

Tune in to the Thursday late night/Friday early morning editions of SportsCenter to see if I can keep this implausible red-hot betting streak alive. Also – there’s a chance Neil Everett gives me his excess chest hair for Christmas.