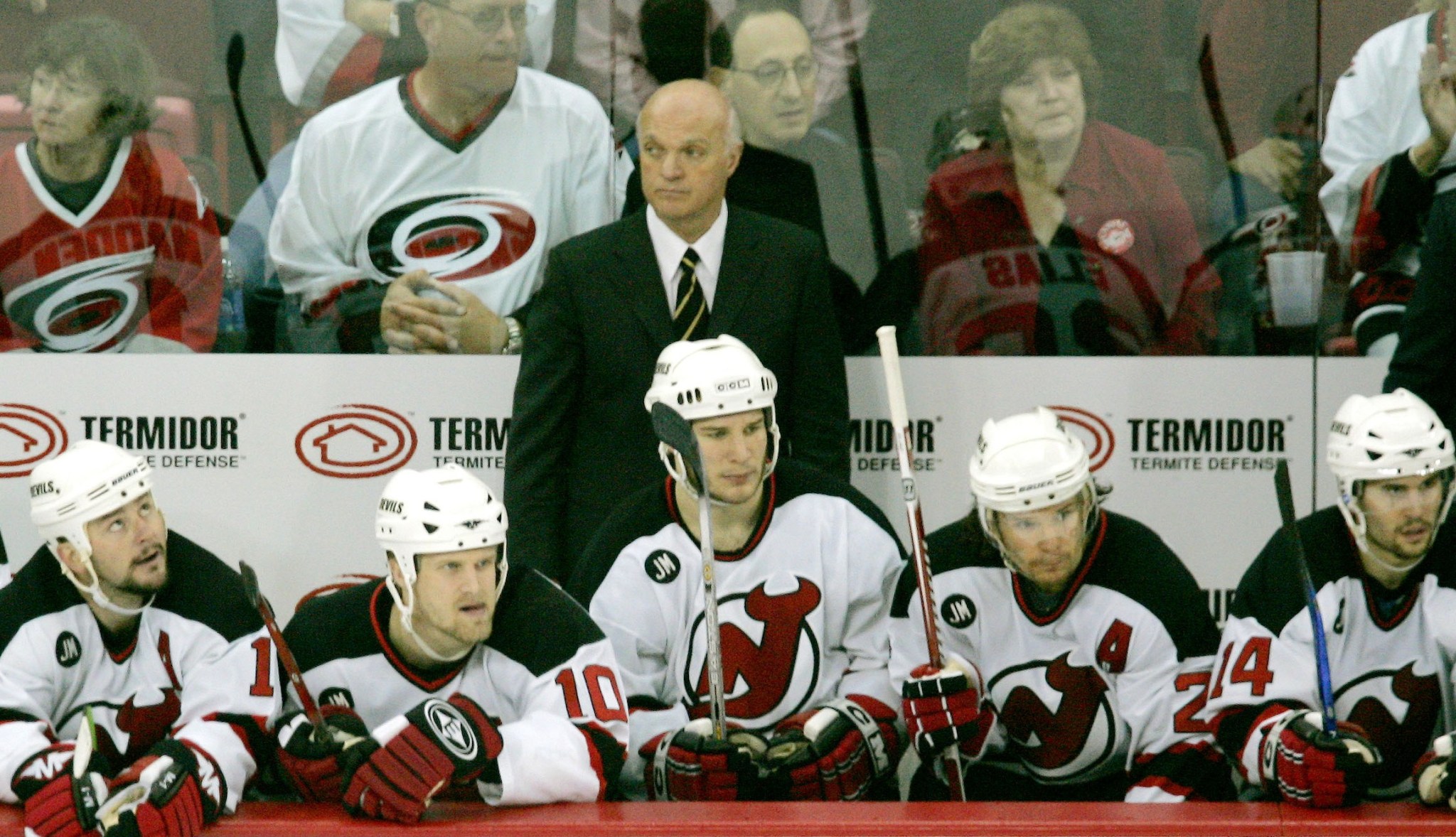 Earlier this week, the Edmonton Oilers became the second team so far this season to fire their coach, when they announced that Dallas Eakins would be replaced on an interim basis by GM Craig MacTavish and AHL coach Todd Nelson.

That was rough news for Eakins, but it’s great news for the rest of us. That’s because the NHL has a long history of odd, entertaining, or even downright disastrous interim coaches. It’s a tough job to step into — you’re basically wearing a sign around your neck that says, “This is the best we could do on short notice” — and even if you do it well, you still might be out of a job once the season ends.

Still, it’s a foot in the door, and sometimes the interim tag has served as the launching pad for a long and successful coaching career. Other times, not so much. So today, let’s take a moment to celebrate some of the shorter-lived interim coaches from NHL history.

Not the Brightest Spark

The Senators recently fired Paul MacLean and gave the job to Dave Cameron on a full-time basis, skipping the interim phase altogether. Cameron is a smart guy, but you could forgive Ottawa fans if they took a wait-and-see approach on him. After all, the Senators have long been a coaching graveyard. Rick Bowness posted a career points percentage of .204, Craig Hartsburg and John Paddock both lasted less than one full season, and even MacLean managed to get shown the door just 18 months after being named coach of the year.

Given all of that, it would be pretty tough for anyone to stand alone as the least successful coach in Senators franchise history. And that’s why you really have to tip your cap to the undisputed holder of that crown: Dave “Sparky” Allison.

Allison got the job in November 1995, replacing Bowness and becoming the second head coach of the franchise’s modern era. “It’s a happy day for the Ottawa Senators,” said GM Randy Sexton, incorrectly. Allison went on to post a record of 2-22-1 for a career points percentage of .100, the worst ever for an NHL coach who lasted at least 10 games. His tenure ended with a nine-game losing streak capped off with a 7-3 loss to the Blackhawks, before team management finally put him out of his misery.

In hindsight, we should have seen that coming. For one, Allison’s nickname was “Sparky”, which probably made it kind of tough to demand respect from a room full of professional athletes. Here’s the full list of everyone nicknamed “Sparky” who’s ever succeeded at a job: Sparky Anderson; the dog from South Park; and the electric chair. That’s pretty much it. (Also, the fact that the 1995-96 Senators were an objectively terrible team probably had something to do with it, too.)

Allison has yet to get another shot at an NHL job, but to his credit he did go on to a reasonably successful coaching career in the AHL, as well as working as a pro scout. He was coaching the St. Louis Blues’ top minor league affiliate as recently as 2013. Today, he’s running the Des Moines Buccaneers of the USHL.

As for the Senators, they proved that sometimes a change of direction works out. On the same day they fired Allison, they pulled the trigger on a trade for a young defenseman named Wade Redden, and they soon hired Jacques Martin. Those two moves would help to, uh, spark the franchise.

The King of the Interim Tag

The sports world is full of numbers, and those numbers can tell a story. Of course, which story you wind up with will depend on which numbers you choose.

For example, did you know that, in addition to a 16-season career in which he won a Vezina and two Stanley Cups, legendary goaltender Rogie Vachon is also the owner of an NHL head coaching résumé that spans 12 years?

That’s pretty impressive. It’s slightly less impressive, though, if you consider that Vachon’s 12-year coaching career actually includes just three seasons. And it gets significantly less impressive when you add in the small detail that his entire body of work spans only 10 games.

Yes, in addition to his goaltending exploits, his nine years as GM of the Los Angeles Kings, and his ongoing work as an ambassador for the organization, Vachon is also one of history’s most prolific interim coaches. He has held the job three times so far, always for the Kings. The first stint last all of two days, January 27 and 28, 1984, when he took over for Don Perry.1 In 1987, he stretched that out to three days, bridging the gap from Mike Murphy to Robbie Ftorek.

After that massive workload, Vachon was clearly in need of a break from bench duties. But he returned to the job one more time eight years later, this time lasting almost two full weeks after replacing the fired Barry Melrose at the end of the 1994-95 season.

Vachon’s career totals: 10 games coached, and a 4-3-3 record. That’s good for a .550 points percentage, earning him a spot on the all-time list ahead of names like Barry Trotz, John Tortorella, and even Punch Imlach. You know, assuming we’re not putting a minimum games requirement on things.

Vachon gave way to Larry Robinson back in 1995, and he hasn’t returned to the job since. But watch your back, Darryl Sutter. Rogie’s out there. And he’s waiting.

On the surface, Lou Lamoriello’s stint as the New Jersey Devils’ interim coach in 2007 stands as one of the most successful in hockey history. When the regular season ended, they were in first place in their division, with one of the best records in the league.

Of course, they were in first place before he took over, too. That’s because Lamoriello arrived behind the bench after firing Claude Julien with just three games left in the season, in one of the more bizarre coaching changes in recent memory.

Lamoriello, of course, has been the Devils’ general manager for more than a quarter century, and he’s no stranger to firing coaches (as Peter DeBoer may be about to find out). The Devils once went through 12 coaches in 13 years, including various repeat appearances by guys like Robinson and Jacques Lemaire. And Lamoriello himself had already done one stint as interim coach just a year before, when he took over for half a season with some success.

But even given all that, the 2007 firing of Julien stands out as bizarre. The team had 102 points at the time the move was made, had won four out of its last five, and seemed to be heading into the playoffs on a hot streak. But Lamoriello saw something he didn’t like — he’s never really fully explained what — and he pulled the trigger.

It seemed crazy, but it had worked once before. In 2000, Lamoriello had fired Ftorek with just eight games left in the regular season. This situation wasn’t quite the same, since that team had been struggling down the stretch, and there was an experienced replacement available in Robinson. But it worked, with the Devils going on to win the franchise’s second Stanley Cup under Robinson’s guidance.

There’d be no repeat of that late-season magic in 2007; the Devils were knocked out in the second round. Lamoriello swore he was done with coaching for good, and so far he’s kept his word.

As for Julien, he wasn’t out of work for long. A few weeks later he was hired as head coach of the Bruins, where he’s gone on to win one Stanley Cup and has been one of the most successful coaches in the league.

Nick and the Nimrods

It’s never easy to replace a future Hall of Famer. That’s the unfortunate position that Nick Beverley found himself in late in the 1995-96 season, when the Maple Leafs tapped him to replace Pat Burns after an eight-game losing streak. It was an odd choice, since Beverley wasn’t currently coaching — he’d been serving as the team’s director of player personnel. But he had a smattering of coaching experience on his résumé, so he got the job.

Burns was popular in Toronto and was a two-time Jack Adams winner at the time, so Beverley was always going to have an uphill climb ahead of him. But common sense would suggest there are a few things any new coach should make sure to nail down. You want to establish a presence in the dressing room. You want to build a rapport with the team’s leaders. And you want to consider making subtle changes to the team’s strategic approach.

Oh, and you should also probably try not to introduce a new word into the sports world’s vocabulary while insulting your players. That helps, too.

Beverley failed on that last point when, after a tough playoff loss, he referred to his players as “nimrods.” That was the first time most fans had heard the term since their grade-school days, and it wasn’t meant as a compliment — although Beverley hilariously tried to spin it that way the next day, by pointing to the word’s dictionary definition (“mighty hunter”).

The Leafs were actually pretty good under Beverley’s guidance, finishing the season 9-6-2 and making the playoffs. But they lost in the first round to the St. Louis Blues,2 and that spelled the end of Beverley’s NHL coaching career. His .588 points percentage ranks second among Leaf coaches of the past 40 years, trailing only Pat Quinn. But to this day, all anyone remembers about his brief tenure is that one word: nimrods.

Roger Neilson’s coaching career was one of the most memorable in league history, spanning eight teams and 460 wins en route to induction in the Hockey Hall of Fame. He popularized the use of video, feuded with Bobby Clarke, and famously waved the white flag.

He was also at the center of quite possibly the most bizarre coaching switch the NHL has ever seen, when crusty Maple Leafs owner Harold Ballard fired him in March 1979. There was one problem: Ballard didn’t have a replacement available, and he couldn’t find anyone who wanted the job. So when the Maple Leafs took the ice for their next game, there was nobody behind the bench. In one of the most surreal moments in hockey history, it wasn’t until the anthem had finished playing that the team’s new coach finally emerged … Roger Neilson.3 Neilson finished the season before leaving the organization for good, and in the process arguably became the only man ever to serve as interim replacement for himself.

Neilson’s second stint as an interim coach proceeded on a much more positive note. In 2002, he was an assistant with the Senators under Jacques Martin. He was also battling cancer, and it had become clear he didn’t have much time left. And so Martin did something unprecedented: He temporarily stepped aside, allowing Neilson to take over for the team’s final two regular-season games. Those two games gave Neilson an even 1,000 for his career, making him just the ninth coach to reach that milestone.

Neilson was inducted into the Hockey Hall of Fame that November, and died seven months later.