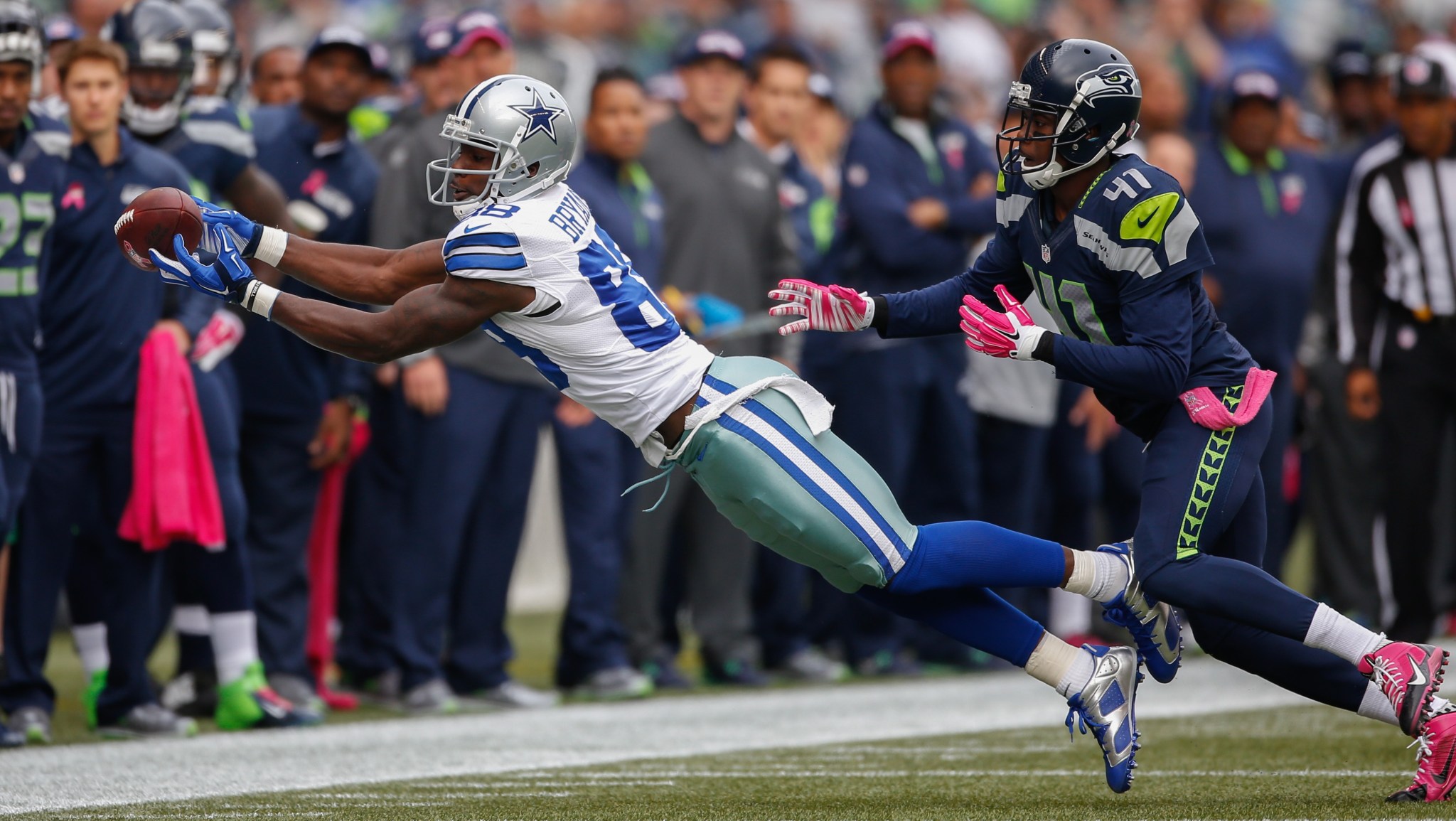 On to the Thursday-night game …

Cowboys/Bears over 26 points in the first half
I don’t know what happened exactly, but the Bears have decided against running the ball this season (38/62 run-to-pass ratio). Chicago running backs took a total of eight — yes, eight — handoffs last week against the Lions in a game they were winning 14-3. My pass-happy 6-year-old son knows how to hold a lead in Madden 25 better than Marc Trestman does in real life. The problem is the Bears aren’t nearly as interested in defending the pass (30th in the league) as they are in throwing it. On the other side of the ball, the Dallas defense is full of young overachievers who are starting to feel the effects of a 16-game schedule. I see a slew of points being scored in this game, especially early on. The over is 4-0 during the last quartet of Cowboys road games. The over has also cashed in 10 of the last 11 games in which the Bears are the underdog. Are those enough numbers for you? Good. I’m already spent. 9,000 jermajesties

Dez Bryant over 85.5 yards receiving
Let’s say for argument’s sake that the Cowboys all-pro receiver wasn’t furious at being embarrassed by the Eagles last week. He still would have a major advantage over the poor bastard who is given the task of shadowing him, Kyle Fuller. The rookie cornerback has had trouble against the more physical beast-like wide receivers (see Cal Johnson last week). Two plays gets this prop done. 5,000 jermajesties

Cowboys/Bears largest lead over 14.5 points
These Thursday-night games tend to be blowouts, or, at worst, start off as lopsided affairs. At least one team has held a two-touchdown-plus lead in four of the last five Thursday-night games. The Bears have either had or been up against a 14-plus-point lead in five of their last seven games. This is another one we can cash early. 6,000 jermajesties

First player to score a TD: Matt Forte (7/1), Brandon Marshall (8/1), Jason Witten (11/1)
This prop has become an expensive habit. It’s my equivalent to the crane game at an arcade. Each time I target three stuffed animals, lower the crane, and never leave with anything to show for it. I usually sneak the guy manning the machine a few bucks to just give me one of the stuffed animals so I can shut the kids up while at the same time looking like a hero. I would love to just once cheat and give Roger Goodell a few extra jermajesties to let me win this first TD bet. How about it, Roger — can we break the rules a little? Don’t worry — no one’s watching the tape. Not even you. 2,000 jermajesties each

Belichick (-165) over Bieber
What happens when the irresistible force (Bill Belichick preparing his team after a loss) meets the immovable object (Justin Bieber imposing his patented NFL curse by forcing the franchise’s biggest stars to take selfies with him)? It’s Alien vs. Predator, Clubber Lang vs. Rocky, Biff vs. Marty, and NeNe vs. Kim all rolled up into one. My money is on the older hooded brat.

175,000/1 odds the College Football Playoff committee gets the four playoff teams right, without dispute, following this weekend’s games
I guess if FSU, Bama, Oregon, and TCU all win while Ohio State and Baylor tank, they will have made the correct call, right? Actually, the odds of those six scenarios playing out are closer to only 3/1, so it could happen. And believe me – I’m not complaining. A six- or eight-team playoff would be ideal, but this is much, much better than we’re used to. My biggest problem with the whole system is that we had to wait until Tuesday to find out the penultimate rankings. What takes so long? The games were completed Saturday night. We know the poll results are based on some sort of computer calculations that spit out a list in under three seconds, so why the unnecessary delay? Imagine if Pacquiao fought Mayweather on a Saturday. The fight was nip and tuck for 12 rounds and the judges decided they weren’t going to tell us who emerged victorious until Tuesday. There would be a riot in the ring. No way either of those fighters is going to wait that long to thank Jesus and his Money Team. Where was I? Oh yeah … gambling. If you can still get it, take Oregon at 3/1 odds. It’s a solid play with good value — provided the committee doesn’t snub the Ducks after they beat the Wildcats this week by 21.

Geno Smith completions in the final home game December 21 vs. the Patriots (-130) over the cheapest price of a ticket sold for that game in dollars

I have the number set at 3.5 — for both dollars and completions. According to SeatGeek, a bunch of seats for this past Monday night’s Dolphins-Jets game at MetLife Stadium went for $10. I figure tickets can fetch a third of that in a game the Pats will have wrapped up somewhere between the gleaming twilights and the glaring red rockets.

Over/under .5 incomplete passes before every member of the Dog Pound calls for Brian Hoyer’s head this week in Cleveland
I’m going big on the under. It probably won’t even take that long. I’m not so sure this is a bad decision by Coach Pettine. Whether it’s Hoyer’s doing or not, the Browns are 10-5 in games he starts. I’ll give him the benefit of the doubt. Besides, whatever decision Pettine made was a win-win for Johnny Football. If he starts … great. If he backs up … even better. That way he doesn’t have to feel as bad when he’s a dozen vodka and tonics in and getting grinded on at the Spearmint Rhino in Vegas at 7 a.m. on game day.

135/1 odds that “nillihc,” a term popularized by Carter, an insane man and last night’s winner of Jimmy Kimmel Live’s fake reality show “Do You Have What It Takes,” becomes Merriam-Webster’s 2015 word of the year

For those of you who care to follow this lunacy, “nillihc” is “chillin” spelled backward. Get used to it, because it’s about to become bigger than “hashtag.” Unless Carter gets arrested tonight for running a meth lab out of his step-aunt’s basement — a prop that’s currently going off at 5/2.

@TheCousinSal over under 3.5 Pitbull cd's you own? I'll take the over.

You lose … by a lot. Although I will admit there was not a bigger fan of Pitbull’s this Thanksgiving than me. I was rooting for his halftime performance to continue forever, as the end meant I would have to endure more of the Eagles pounding the ball down my beloved Cowboys’ collective throat. Sigh.

@TheCousinSal @SportsCenter Your head looks a lot bigger every week!

Thanks for noticing, Matthew. And why wouldn’t it? I’m 6-0 against the spread with my SportsCenter picks over the last two weeks. 8-1 over the last three weeks. 10-2 over the last four weeks. 5-1 with my teasers. If this keeps up, ESPN is going to be forced to give me parking validations that actually work well enough to get me out of the employee lot without leading to a screaming match with the attendant.

Catch me spewing more gold with Neil Everett on tonight’s SportsCenter (10 p.m. PST), and then again tomorrow morning on the East Coast.

Last week: -800 jermajesties (Are you effing kidding me — that Cowboys/Eagles game really stayed under?)
Year to date: 25,900 jermajesties

The Browns Starting Brian Hoyer Is Smart (Which Is Crazy)