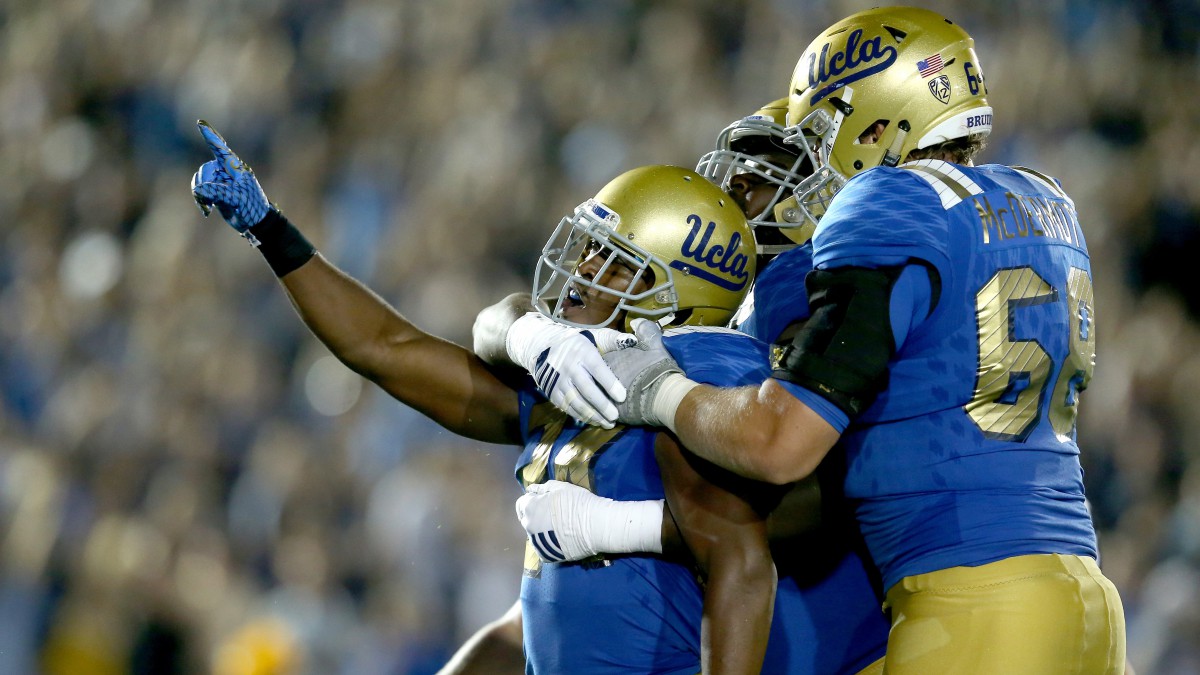 How’s everybody recovering from the emotional exhaustion of last week? Feeling rested? Spite glands slowly refilling? This is about it for fan conditioning, the last chance you’ll have to get into game shape, spiritually speaking; Week 4 brings most of the FBS-on-FCS ultraviolence to a close. Prepare for a Saturday of frantic toggling between ranked Pac-12 action, stoking the eternal flames of SWC animosity, and reviewing radiation incident plans for your home in case whatever toxic compounds UCF and South Carolina form can be diffused by air.

Top 25 Matchups: Two, both out west. And, of course, they overlap. The following video will serve as a stand-in for the emotions of the viewing public in this matter:

No. 9 UCLA at no. 16 Arizona (8 p.m., ABC) kicks off first, with the Bruins down a third defensive starter for the year following the loss of Triangle All-Star and Internet darling Myles Jack. No. 18 Utah at no. 13 Oregon gets under way shortly after in Eugene (8:30 p.m., Fox), with both starting quarterbacks already in some state of disrepair.

How High Are the Week 4 Stakes? About the height of a drop from ground level to the deep end of an emptied post-summer swimming pool. Full slates of conference play can’t get here soon enough.

Destination Game of the Week: Southern at no. 7 Georgia (noon, SECN). The Jaguars were contracted by the Bulldogs to bring their Human Jukebox up from Louisiana, giving Georgia fans a reason to actually show up for a noon game against an FCS team, and your friendly neighborhood college football blogger an excuse to post videos of said band:

Crank the speakers up and keep scrolling. This is your soundtrack for the rest of this post. You are welcome.

ESS DUBYA CEE Rivalry Games of the Week: Four teams formerly seen playing under the greatest athletic logo this country has ever known cross paths in the Lone Star State this week. Texas Tech hosts no. 3 TCU (4:45 p.m., Fox) in a game that — unforgivably, if you ask me — no longer awards a saddle to the winning squad. In Arlington, Razorbacks alum Jerry Jones welcomes no. 14 Texas A&M and Arkansas (7 p.m., ESPN) to his personal football cathedral for a game in which, verbal niceties aside, you’ll see two teams try to run up the score harder than any other this season, guaran-damn-teed.

Grudge Matches of the Week: It’s been a rough few days in the Yellowhammer State, with both premier football programs suffering divisional defeats, but there’s hope on the horizon in Tuscaloosa as no. 12 Alabama welcomes Louisiana-Monroe (4 p.m., SECN). The Warhawks and Crimson Tide are tied 1-1 all-time, and if Bama’s bunch is able to take the series lead here, it’s safe to say it’ll go a long way toward salving the wounds of September.1 If ULM triumphs again, well, we’ll hear about it in the skies, sure as not.

Support Cruelty-Free Football and Ban These Games: After much lobbying of legislators on both the state and national level, it doesn’t appear that human rights groups will be able to prevent Tennessee at Florida (3:30 p.m., CBS) from being inflicted on both the participants and the viewing public. If there’s any comfort to be had, it’s that it’s impossible to imagine a more aesthetically displeasing football contest than these squads staged last season.

But we can do something about these nonconference atrocities. Get involved. Write and call your congresspeople, and tell them that outrages like Kansas at Rutgers (noon, BTN) and UCF at South Carolina (noon, ESPNU) simply will not be abided.

This Week in Why? NC State at South Alabama (8 p.m., ESPNEWS). You sure you wanna play the only FBS team in the state of Alabama coming off a Week 3 win, Wolfpack?

This Week in Why Not? No. 8 LSU at Syracuse (noon, ESPN), because every college town should experience the cuddly, beer-draining terror of a Bayou Bengals visit.

The great thing about a lot of teams still playing no-account tuneup games is you don’t have to watch them! Spend long stretches of time instead with the contests that might actually get interesting. (Sincere apologies in advance to whoever this jinxes into losing to a team it paid half a million dollars to play.)

Saturday: Ever been pouring something carbonated into a glass, and it starts to foam over the rim, but you just keep right on pouring even though you’re making a sticky mess you will promptly forget to clean up? In the spirit of that pugnacious American optimism, try alternating between Kansas at Rutgers (noon, BTN) and UCF at South Carolina (noon, ESPNU) to start the day, just to see what happens to your blood chemistry. Mix in a little Southern at no. 7 Georgia (noon, SECN) for Human Jukebox relief.

In the afternoon slate, it’s all in one state. No. 24 Oklahoma State at Texas (3:30 p.m., ESPN) provides what’s probably your first look at the Cowboys this season; there’s something about playing Central Michigan, Central Arkansas, and UTSA that keeps a team below the national radar. Change over to no. 3 TCU at Texas Tech at 4:45 p.m. (Fox), and follow that up with no. 14 Texas A&M vs. Arkansas (7 p.m., ESPN).

Until then, run some shuttles to keep your conditioning up. Take ’em to church, Grover: