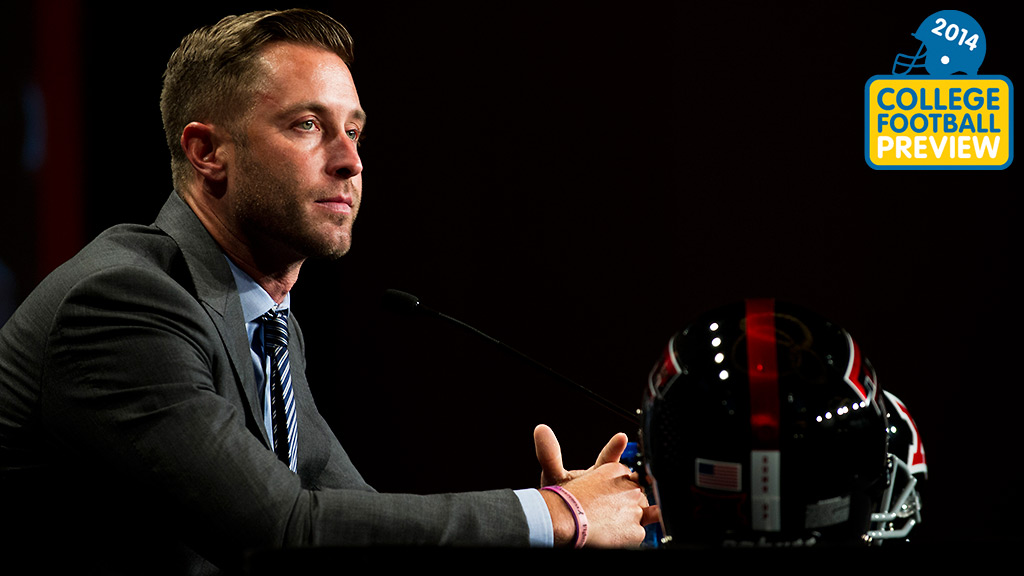 Summer football news is like a summer movie slate: allowed all manner of leeway as long as it sells popcorn. Here, let us hand-feed you fluffy kernels of news, interspersed with unpopped seeds of rank absurdity.

While we’ve all been off having a summer, planet college football has spun far enough around to get its denizens to the oil-slicked desert oasis that is summer media days (we are not astronomers), where Things Are Happening, Sort Of. Last week, we updated you on the happenings at the SEC’s, ACC’s, and first half the Big 12’s media conferences; today, we pick up with the rest of the B12 and review the news out of the Pac-12 and Big Ten gatherings.

• To business: The most essential item from last week’s gathering in Dallas, by the academic definition of “essential”: rule changes! The league adjusted its policies on targeting, loose-ball recoveries, and ruling receivers out of bounds.

• To partying in the front: The most essential item from last week’s gathering in Dallas, by our own custom-tailored definition of “essential”: West Virginia’s punter’s facial-hair game.

• Why can’t you be more like your stepbrother? One party in the never-ending Texas–Texas A&M game of I Don’t Miss You, You Miss Me finally acted like a person, and it was the new guy! Charlie Strong, extending his disarming streak of common sense that’s upset a good many senseless people, followed up his refreshing take on the 2014 Longhorns’ title chances by suggesting that maybe this longstanding and wildly popular Longhorns-Aggies series ought to be resumed. One really great way to find out whether you’re friends with the right people is to see whether they are mad at Charlie Strong over any of this. Shun the ones who are.

• Conference Kimmelization: This doesn’t even deserve the descriptor “mean.” This, on the other hand:

This doesn’t give the sport’s revolting social media underbelly the attention it craves. Get the coaches on Jimmy Kimmel Live and have them read some of the less family-friendly tweets that cross their feeds. Make it a mandatory stop on the car wash.

• The manner in which Baker Mayfield is being treated continues to be some bullshit. John Infante lays out all the manners of bullshit.

• Bob Stoops has a really good idea. Scroll down here to the bit about overtime.

• Show, don’t tell: The Pac-12 is the most user-friendly league when it comes to technology. You can read every coach and player interview transcript, goggle at elite athletes in funny hats, and watch every media day video highlight right here.

• The life, this generation: RichRod, bringing the Tommy Bahama fire to Hollywood: “I could be like every other coach in America and tell you how excited I am to be here, but that would be lying. Truth is I’d rather still be on vacation or meeting with my coaches.”

• The life, next generation: Marcus Mariota has got life figured out. Finished with his general science degree requirements in three years, Oregon’s quarterback elected to return to school and is taking two classes to round out his credits: golf and yoga. Marcus Mariota’s fall semester will consist of playing golf, doing yoga, and playing football. Marcus Mariota is living everybody’s ideal collegiate existence, and any hand-wringing column to the contrary is constructed entirely of pure and vile hateration.

• More is more, especially in the 14-team league with “Ten” in its name:

Big Ten Media Days are being held in the opulent Palace of Versailles: pic.twitter.com/c2uud0tOyE

• Why can’t you be more like your stepbrothers? cont’d: Almost by necessity, conference commissioners are enthusiastically, incessantly full of shit. Yet the way the Big Ten is setting up is just about ideal for our tastes. Here’s B1G skipper Jim Delany: “We will play one major intersectional game, nine conference games, a championship game and all games against Football Bowl Subdivision teams.” The Savannah States of the world might need the money, and the big boys might need the gimme wins, but how much would the quality of the overall television product spike if every power conference echoed Delany’s pledge?

• The key to beating Penn State under James Franklin: Break into the stadium the night before and hose the logo off the field, apparently.

• #TimBeckmanMomBirthers: The truth is out there, behind a lectern.

This league is no longer a power conference, but nobody turns down an invitation to the former Big East’s annual clambake:

This is Houston OL Bryce Redman eating a lobster. It's his fifth one. #AAC pic.twitter.com/Os44HkWaII