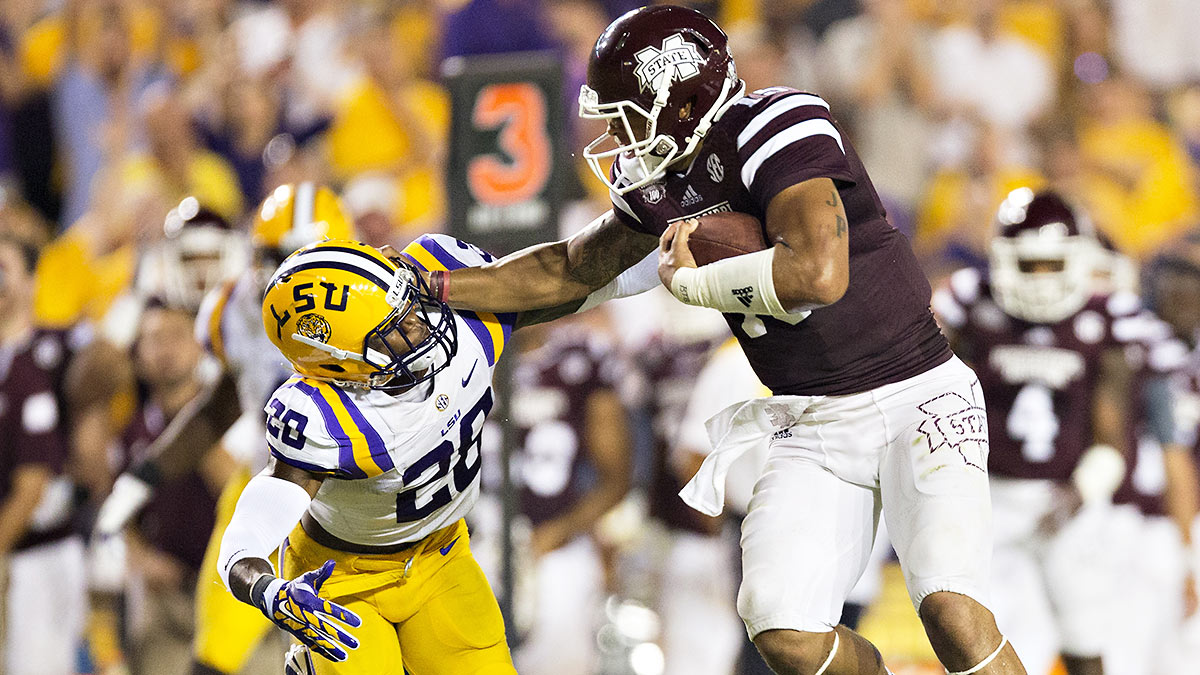 Celestial Recalibration of the Week: [THUDTHUDTHUD]

Week 4 was a little like a Roman feast, in that it was heavily back-loaded and required a healthy bout of vomiting in order to take it all in. Stellar rushing performances, though, were helpfully spaced throughout the day for maximum appreciation. We have not the capacity to list them all here, and please interpret any omissions as a deeply personal insult to you and your team, but just bask for a moment in the brutish earthly radiance of:

• Pitt’s James Conner, who runs like a Skee-Ball, gained 155 against Iowa, and is a yard away from cracking 700 after four weeks of play.

• Another true freshman, Oklahoma’s Samaje Perine, who subbed in for the injured Keith Ford at West Virginia and came away with 242 yards, four touchdowns, and plenty of snuggly photo memories.

• East Carolina’s Breon Allen, who was responsible for 211 of the Pirates’ 343 rushing yards versus North Carolina, and who appeared at all times to be shielded by some type of cloaking device from all who might wish to tackle him.

• Ameer Abdullah, who accounted for more than half of Nebraska’s 456 total yards against Miami.

• Derrick Henry, of whose “Tractorcito” nickname we were unforgivably unaware until he went into triple digits on the ground for Alabama against Florida.

• Wisconsin’s Melvin Gordon, who weathered his first career fumble (after 322 career carries, that sloth) to lead Wisconsin’s 644-yard ground annihilation of Bowling Green. Gordon managed scoring runs of 50 and 69 yards as part of his five-touchdown day. Here he is being hoisted into the air by a teammate like a living, breathing kettlebell:

• Greg Pyke (OG, Georgia): It’s hard to pen a proper paean to the ground game in 2014 without mentioning Georgia, but the Bulldogs’ 66-0 dispatching of Troy was not without cost: Keith Marshall left the game with an as-yet unspecified leg injury. With Nick Chubb limited in action as a precautionary measure following a thumb injury and Todd Gurley getting most of the afternoon off, the bulk of the carries fell to true freshman Sony Michel, who was at one point bodily hauled in for a touchdown by right guard Pyke, a move that ranks on an adorability scale somewhere above “video of baby lion falling asleep” and just barely behind “laughing panda cub” (barely):

• Willie Henry (DT, Michigan): Here’s something nice to say about Michigan in Week 4, and it takes no effort at all to conjure up! This is a charming Fat Guy Touchdown executed by redshirt sophomore Henry:

• Anu Solomon and Austin Hill (QB & WR, Arizona): If you’re going to fall behind 28-6 to a team that recorded one win in 2013, and trail 31-16 entering the fourth quarter, and then barnstorm your way back to within two points so you can attempt an actual, honest-to-weeping-statues Hail Mary as your last resort — by God, in that final moment, do you ever want it to look like this connection between Solomon and Hill:

Lane Kiffin: No, we know. But … this is happening, and we can’t fight the moonlight, OK? From the Tide’s first offensive play (an 87-yard touchdown pass from Blake Sims to Kenyan Drake, with a thoroughly miserable Jabari Gorman giving chase) to the final whistle (at which point Alabama had gained more yards on Florida than has any opponent in Gator history), Alabama’s offense was in the control of this guy, whom we’d put all our money against all of yours was singing along to Aloe Blacc’s “The Man” in a Cartman voice the entire time. A pitch-perfect Cartman voice. Now you hear it, too, and we are sorry about that, sort of.

Reveille, Texas A&M: Every proper temple should have so zealous an acolyte on guard. (Does Reveille even blink?)

You tried. You all tried. That is not a compliment. It is a fact that you were visibly attempting to do a thing. Results varied. Scratch-and-sniff stickers, in no particular order, are awarded to:

• Clemson, for Saturday night’s fourth-quarter shotgun antics, which were shortly followed by a loss to Florida State that we’re not prepared to call A Clemsoning, but that was not without Clemsoning properties.

As @InTheBleachers once said, shotgun is for birds, beers, and home invaders.

• Purdue. Purdue, where are your parents? C’mon, buddy.

How out of practice are the Boilers at winning? Raised the 'W' flag upside down. In distress perhaps? pic.twitter.com/x9yhEsWqIi

• South Florida, bedeviled by weather and by UConn. This is maybe the most tender Grape Job sticker ever stuck, so great is our genuine affection for this entire sequence of slip-’n’-slide mania. The Huskies ran a total of 36 plays on Friday night, and it wasn’t even one of theirs to begin with, but it’s going in the slapstick vault:

South Carolina, your coach would want you to have this:

“This Is Just to Say,” by “William” Karlos Williams: