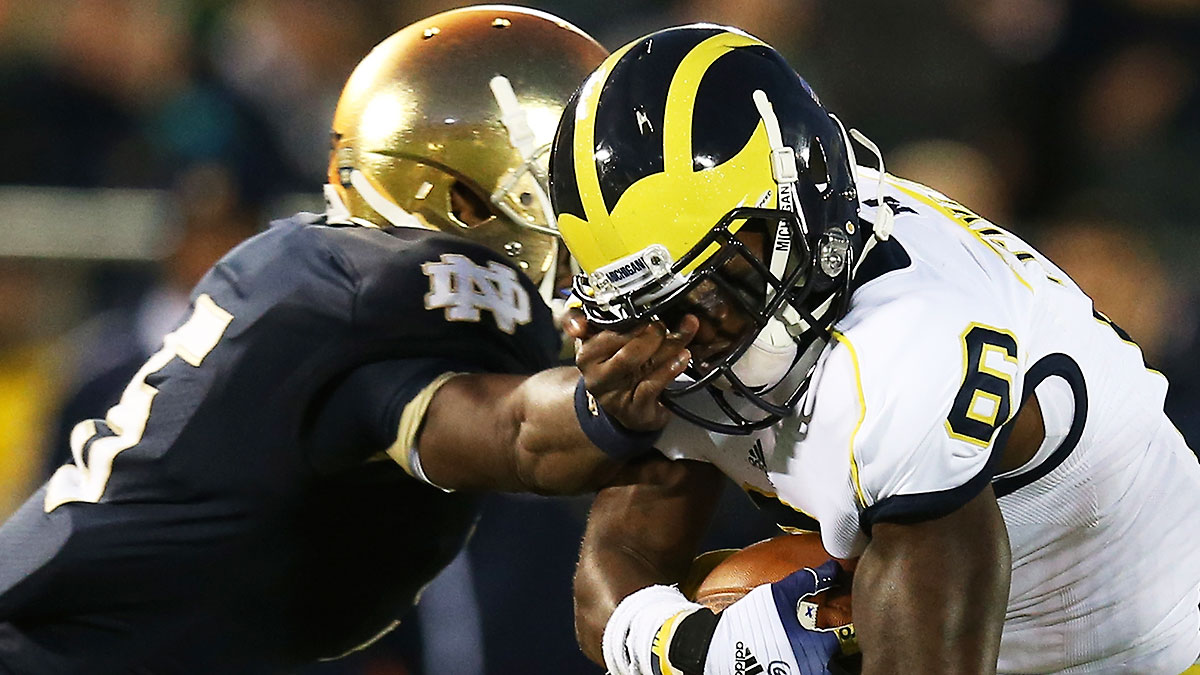 • Celestial recalibration of the week: Whatever sinister Solomonic angels were charged with watching over no. 16 Notre Dame and Michigan in Week 2, we sing your praises and argue that this outcome is actually quite beneficial to both parties. Faced with the last scheduled game in a longstanding rivalry series between tradition-drenched programs, the universe provided a fitting conclusion, in the form of a 226-yard, three-touchdown passing performance from Everett Golson, and a shutout from a Fighting Irish defense1 down multiple starters to suspension, ensuring that (a) Notre Dame walks away pleased with putting an exclamation point on the end of an era, and (b) Michigan never wants to see Notre Dame again. Everybody wins! Kinda! How ‘bout that, Brian VanGorder?

• Upset of the week, GET IT OFF ME GET IT OFF MY FACE IT’S GOT SPIKES AND IT’S VERY ANGRY GET IT OFF ME Edition: Week 2 arrived full of pluck and poison, with teeming Power Five programs finding creamy toxic centers in their would-be profiterole opponents: The leadoff contest saw Arizona edge a still-eggtoothed UTSA team by three points. No. 19 Nebraska needed a last-minute touchdown from Ameer Abdullah to get past the mighty McNeese State Cowboys (though ye gods and little fishes, what a touchdown!). Colorado notched a three-point victory but wound up on the wrong end of a highlight reel from UMass. No. 21 South Carolina had to resort to the rock-pounding kind of clock exsanguination that still seems vaguely horrifying coming from Steve Spurrier to seal a victory over East Carolina. A last-minute end zone interception saved also no. 21 North Carolina from a home loss to San Diego State. In the late-night matchup, Brett Hundley was sacked twice by a Memphis player named Tank Jakes, which is an excuse both to type “Tank Jakes” and to point out that although no. 11 UCLA won, it probably shouldn’t be operating within a one-score range of Memphis at home if it wants to make the playoffs. Finally, Week 2 ended with a near-miss tilt between Texas Tech and UTEP, which we’re more willing to excuse because it was a 10 p.m. local time kickoff in El Paso, and Things Happen There after dark.

• Play of the week, Paul Revere Defending the Colonies Edition: By land: This 95-yard strip-and-score by Western Kentucky’s Wonderful Terry.3 By sea (of memories, because it was called back but lives forever in the clogged hearts of a nation): redshirt sophomore DT Jordan Phillips, listed by no. 4 Oklahoma at 6-foot-6 and 334 pounds, with a 70-yard fumble return for a resplendent Fat Guy Touchdown; highly enjoyable reaction shot from Tulsa here. By air: two marvelously balletic interceptions of Connor Cook by senior Oregon defenders. The first, by Erick Dargan, came with a midair pirouette we’re christening the Toe Pick. The second, a beautiful improbability by Ifo Ekpre-Olomu, you can watch for yourself:

• Best breakout, Teen Jailbreak Edition: A big week for youth migratory movements wound down with a talent show by Oregon’s offensive underclassmen. Not to devalue in any way the defensive adjustments that allowed the Ducks to thoroughly bewilder Cook and Michigan State’s offense late, and not to distract from Marcus Mariota on a night in which he became Oregon’s career leader in total offense, but just look at the Ducklings surrounding Mariota and conspiring to ruin our planned THE ‘DUZZ IS LOOSE headline: redshirt freshman Darren Carrington, so alone on a 64-yard reception to open the second quarter that he could’ve set up a teddy bear picnic undisturbed at the spot of his catch in Spartans territory; redshirt freshman Devon Allen, who caught a 70-yard pass from Mariota and busted away from a defender so fast even the Telestrator pen missed him on replay; true freshman tailback Royce Freeman, smiling sheepishly in his video board intro and leading all Ducks with 89 yards rushing. Babies doin’ bad, bad things.

• Units of the week, Individual Players Who Are Themselves Units Edition: We continue to live in terror of what USC defensive end Leonard Williams might look like with four healthy limbs. After watching him scamper (all 6-foot-5 and 300 pounds of him) after Ty Montgomery, seeing him record a sack and tie for a team-high 11 tackles against Stanford, and then hear Steve Sarkisian say “he obviously wasn’t 100 percent today,” we’re prepared to start telling young children that Williams is what comes after you in the night when you don’t eat your vegetables.

• Pinball wizards of the week: This week’s salute to the utterly absurd: Georgia Southern’s 10 rushing touchdowns against Savannah State. Florida State managed only 55 points against the Tigers in 2012; by our infallible calculations this puts GSU about a year and a half away, at most, from winning a national title.

• Fans of the week: Pregame: You are so, so brave, Toledo.

Toledo students walking through the gates are being equipped with…vuvuzelas. #Mizzou pic.twitter.com/YxCgBUVAFp

Postgame: Stefanie of Michigan, speaking succinctly on behalf of a clobbered conference.

#B1G RT @IAM_SHAKESPEARE: Doomsday is near. Die all, die merrily.

• Grape Job! You tried. We’re not saying that’s a good thing. We are stating a fact. All of you tried things: no. 2 Alabama, for calling off its game with Florida Atlantic in the fourth quarter, definitely because of weather and not at all because it feared the absolutely imminent Owls comeback; the Coaches Poll, to which we are not linking, as it currently ranks Ohio State ahead of Virginia Tech; Vanderbilt, whose torpedo-damning spirit deserted it completely against Ole Miss; Central Michigan, for this — we know y’all don’t have much practice, but get it together; USC AD Pat Haden, for descending from his box to argue penalties with the officials during a game, thus allowing us to pass the following Sunday in our hotel bar compiling a list of famous former athletes we’d like to see try the same stunt. The list is 22 entries long, and all of them are Barry Switzer.

• Gold star for meritorious athletic directoring: It is splendid that the Michigan State–Oregon game existed in the first place, even before it actually took place and turned out to be such a fine piece of entertainment. Nos. 3 and 7, both potential conference champions in December, playing on an actual college campus, in Week 2 when the vast majority of conference play is still weeks away from kicking off? We’re grateful for it, that’s all. The green country around Eugene, saturated with color like a Sonic the Hedgehog level; the collage made in the stands by yellow-clad Duck partisans and green Spartans visitors; the scoring streaks and postgame on-field ambling. All of it. More, please.

We Went There: The Yankees' Definitive Derek Jeter Day