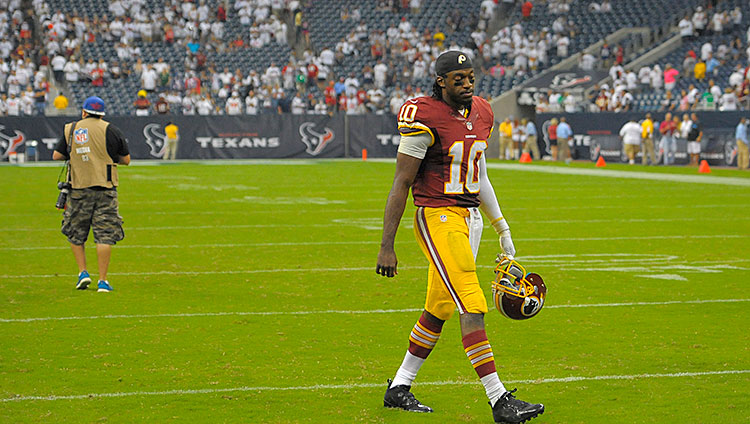 Peter Rosenberg (@Rosenbergradio) is the cohost of the Grantland Network’s Cheap Heat podcast and a DJ at New York’s Hot 97 FM. He is also a Washington Redskins fan, and he needed to get some things off his chest about Robert Griffin III.

Talking Robert Griffin III is big business. There is a reason he makes headlines and drives sports radio conversation every day. That reason has nothing to do with his actions off the field, or even on it. Griffin played solidly in the Redskins’ loss Sunday to the Texans, and surely was not to blame for his team’s self-inflicted wounds. That won’t matter. Griffin has become one of those guys people love to chew the fat over. Given how much he is dissected, you’d think he seeks out controversy. But almost nothing about him is controversial.

If you compare his biggest “controversies” to those of the other athletes who receive a similar amount of scrutiny, you come up with nothing. The worst thing Robert Griffin can be accused of is sending subliminal jabs at Mike Shanahan (whose handling of what should have been his star pupil was embarrassing to watch) and once actually refusing to take all the blame for a loss, the way he otherwise usually does. Oh, and he tries too hard.

Yes, many people in Washington cannot stand Robert Griffin because he risks injury too often, trying to pick up extra yardage. Oh, the humanity.

I understand that Griffin should be aware of his own value and importance to the team, and he should make careful decisions about what is, after all, his own body. He showed major growth in this department on Sunday, escaping danger and avoiding big hits throughout the game, despite a monster named J.J. Watt living in the Redskins’ backfield all day.

But let’s be serious. The man plays professional football at a very high level. It’s a dicey business no matter what he does. Nonetheless, fans still get upset with him for risking injury. How weird is that, in a game in which players typically get criticized for not giving their all, especially top-dollar players?

I went back and watched RG3’s 2012 highlights, and followed them with highlights from the 1987 and 1991 Super Bowl seasons (thank you, YouTube). Nothing was similar about those highlight reels, from two different generations, except the electricity of the crowd.

Robert Griffin III is the first man to electrify this fan base in more than 20 years. He is already the most important Redskin since the glory years, save maybe Sean Taylor. We have had some great players who wore the burgundy and gold proudly (Chris Cooley, Santana Moss, Trent Williams, and now Alfred Morris), but none has had Griffin’s impact.

And maybe that’s it. That is why we are obsessed with discussing his shortcomings. That’s why we’re so mad he made a documentary that may have “jinxed” the 2013 season. We’re scared.

And just as in the pursuit of ratings on cable news, fearmongering wins. If it bleeds, it leads, and no matter how unscathed RG3 goes in a given game, he’s still covered in blood when it’s time to prepare stories for the next day. We gobble those stories up and continue to project our anxiety onto Griffin. It’s a burden he doesn’t need or deserve.

Griffin wasn’t here for the last 20 years of sucking and he doesn’t deserve to have that fear and misery pushed on to him. To him, it’s history and just history. But 2012 wasn’t just history. He led the Redskins to beat the Cowboys in Week 17 and win the division. The Washington Redskins seemed on the brink of something truly great. It could still happen. Our job is to stop being scared and let Robert Griffin play football. And though his first 2014 outing was not perfect, it was a pretty good first step toward regaining the glory of his rookie season.

You Won't See Me: The Hidden Lives of U.S. Open Ball People