You Won’t See Me: The Hidden Lives of U.S. Open Ball People 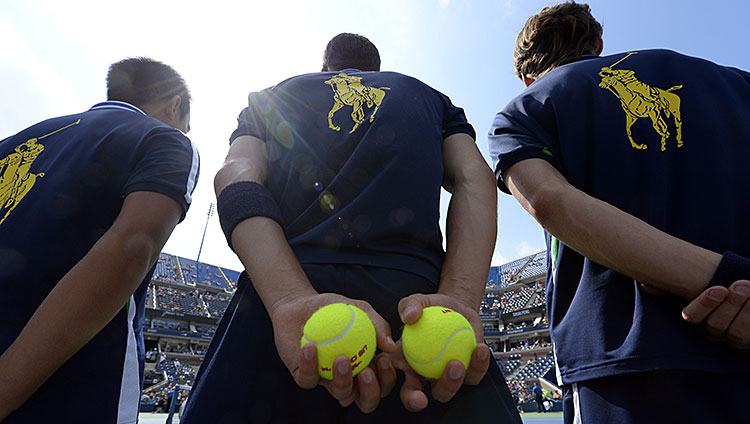 At 3:37 p.m. on Day 9 of the 2014 U.S. Open, attention was the hottest commodity at the Billie Jean King National Tennis Center. The air temperature in Flushing Meadows was 91 degrees, humidity 57 percent, heat index hellacious, but inside Arthur Ashe Stadium, a giant wok of concrete and steel, it was at least 15 degrees hotter.

The cumulative perspiration of the fans, players, and staff created a hothouse effect that probably kept everything inside Ashe from combusting into its homophone. A young girl, about 7, sitting with her little brother and parents in the lower mezzanine, could barely focus on the Cherry Garcia slowly coating her forearm, let alone the Round of 16 match between no. 7 seed Grigor Dimitrov and no. 20 seed Gaël Monfils.

Monfils was overpowering the powerful Dimitrov. At 7-6 of the second-set tiebreaker (he was one set up already), the lanky Frenchman — half–Thierry Henry, half–Johnny Football — paused before serving, slipping into his best Gladiator pose for the crowd, who encouraged him with a uniquely New York rage-cheer.

Monfils held his pose for a good 10 seconds. The whole time, a ball boy crouched on his knees and elbows at the net, pressing the sensitive underside of his forearms to the scalding DecoTurf surface, staying low and out of camera shot.

He stayed there motionless, expressionless, as Monfils served, won the point and the tiebreaker, and began his strut to the half-court chairs.

It was only at that second that the ball boy sprang into a full sprint toward the chairs, so that he could grab, open, and hold a shade umbrella over Monfils’s head, all before Monfils sat down. No one noticed. Macklemore and Ryan Lewis’s “Can’t Hold Us” pumped from the PA, and ice cream girl dumped ice water on a Brit sitting in front of her. The Brit fumed.

When play resumed, Monfils was again serving. He hit a 123 mph fault out of Dimitrov’s ad court, which Dimitrov let pass. The ball boy, standing at the wall, about 20 feet behind Dimitrov, hands clasped behind his back, effortlessly reached out, caught the ball backhanded, and returned to his stance before the impatient Monfils was ready to serve again.

This was Nick Zikos, a tall, dark, and handsome 22-year-old from Forest Hills, Queens. Finally, the ice cream girl was interested enough (momentarily) to comment on Zikos’s grab. Later in the set, with Dimitrov serving, Zikos gathered a ball and threw it, cross-court, to his fellow ball person — about 145 feet away — on a rope, no hop, into a waiting hand.

The grumpy septuagenarian a few rows back, who’d been chastising Monfils the whole match for his contribution to the delinquency of the minor tennis fans watching, perked up.

Zikos is one of the handful of U.S. Open ball people blessed with good looks, youth, a great arm, and a tennis brain. He is routinely assigned to Arthur Ashe by Tina Taps, the National Tennis Center’s manager of tennis programs and the U.S. Open’s Head of Ballpersons, but no one is guaranteed television time, and Zikos, just like everyone else, also puts in work on the outer courts all day and night.

When Taps heard about the no-hop throws, she was less than enthused. “He should be throwing with a bounce. It makes the catch easier,” she said, a little surprised she hadn’t heard about it. She was reinforcing what seems to be her modus operandi: Always be aware of others.

“The one guy that’s really great, that you’re talking about, that’s one individual. But put a lot of individuals that are dedicated to the job and dedicated to making the ball persons’ group look good on the court, and off-court, as well, you know, they’re important. They’re all important.”

Taps, born and raised in College Point, Queens, near the Whitestone Bridge, is slight and polite but direct in both her movement around and opinions of the National Tennis Center. She’s protective of her crew. The ball people, ranging in age from 14 to 50 this year, are her extended family, and the National Tennis Center is their home, but they are also Taps’s missionaries.

Many of them start out as youth players under her watch, most are from New York City or nearby, and Taps nurtures in them a sense of community and duty beyond their part-time jobs during the U.S. Open. She’s forgiving but firm with mistakes, and beams with pride when one of her boys, girls, men, or women does well, especially when it’s noted by the fans and/or the media. It usually means he or she has done something exceptional to enable continuous play, a guiding principle, per Rule 29 in the International Tennis Federation’s Rules of Tennis, and the Golden Rule of Ball People. Never disrupt play, for the good of the players and the spectators.

At the end of the Day 9 night session, with strong winds whipping around Ashe’s upper deck, one such exceptional act of continuity occurred. A lone white plastic bag caught a gust and descended from the top of Section 309 toward the court. Jemila Brady, 20, St. John’s comms major and eight-year ball person veteran, was positioned at the wall, directly below.

The bag was drifting toward the court from her blind spot. Caroline Wozniacki was about to serve for the match. Brady spotted the bag as it floated down, past the luxury suites. When Wozniacki’s opponent, Sara Errani, asked for a brief moment before the serve, Brady pounced from the wall and sprinted toward the net, snatched the bag on the run before it hit the ground, and settled into a crouch at the opposite side of the net. Neither player even knew what had just happened.

This act made the highlight shows, but in every match, on every court, ball people are stealthily displaying feats of supreme athleticism.

Back on Day 5, Court 11 (capacity 1,552), a crew chiefed by Joe Raaen, 40, a San Francisco native living in Brooklyn, worked a men’s singles second-round match. Late in the three-hour, 45-minute five-setter, with no. 11 seed Ernests Gulbis fighting off unseeded Dominic Thiem’s match points, Gulbis unloaded one of his signature nuclear first serves, a 137 mph neon blur in the outside deuce corner.

Raaen was just settling into position after placing Thiem’s towel in the corner, and Gulbis’s serve was heading right at his reproductive organs.

From the stands, it looked inevitable that the burly advertising exec was about to go viral. But with all the grace of a swan, he swept his meaty hand across his body and caught the projectile, seemingly without looking. In a match that had innumerable entertaining tennis moments, it was Raaen’s catch that elicited hushed gasps.

A week later, while sitting in the Food Village with a few of his fellow veterans (looking like the cast of an Off Broadway adaptation of Robert Altman’s M*A*S*H), Raaen couldn’t even remember the catch.

“Everybody out here makes great grabs,” he said. “If I make one good grab a day, I’ll go home and be like, ‘Yeah, I did that.’”

Raaen’s right knee was triple the size of his left, filled with fluid from two weeks of hard pivots, but his face was glowing. “That’s part of what gets people addicted to coming out. Just being around that, and getting to play with balls.” It’s a game between them, and they all talk about good grabs, big throws, quick towels.

Everyone talks about the mistakes, too. Horror stories are passed down from generation to generation, to remind everyone of the perils of inattention. There is the infamous tale of the ball boy who struck a bespectacled chair umpire with an end-to-end throw, breaking her glasses and cutting her face. There is also the incident that, instead of describing, most will just tell you to “Google ‘ball boy fail.’”

In the third round of this year’s tournament, one of the ball crew achieved a moment of brief infamy for missing the catch Raaen made — a 143 mph. Milos Raonic serve catching him square in the groin. “I didn’t know I hit him in a very sensitive spot because the guy stood up pretty well,” Raonic said after the match. “I’m not sure if I could, if something hit me there at 143 miles an hour.”

It was an odd moment of notoriety for someone in this line of work. Ball people are asked to be invisible, but required to perform complex physical and mental tasks in order to do so. They make it easy to miss how good they are, even when your job is to notice how good they are. They become an integral part of the match, symbiotic extensions of the players, many of whom they’ve worked with before or studied on television.

On Day 11, the last match of the night, a quarterfinal between Monfils and five-time champion Roger Federer, started at nearly 9 p.m. The ball people had been working in shifts all afternoon, but the adrenaline that came with a match of this stature erased any fatigue. The crew that started the match carried over from an exhibition doubles match between John McEnroe, Jim Courier, James Blake, and Mats Wilander, during which one of the ball people played in Blake’s place for a point, beating Courier with a cross-court drop shot.

At 5-4 in the first set, a Federer backhand popped off the bottom of the net’s center strap into the ball person’s no-man’s-land at the intersection of the center and service lines. The net and back positions both sprinted for the ball, which was bouncing high overhead. The back ball person leapt, Jordan-esque, in full stride and caught the ball at its apex, while the net person crossed underneath him to the opposite side, leaving an open position at the net for his partner, who landed and sprinted to it. Monfils served and won the first set.

For the second set, the crew changed. Zikos was on and made an incredible backhand grab near the ad court tunnel, returning to position before Federer served again.

Monfils grabbed a two-set lead, then dropped the third. It was noticeable that famously courteous Federer was not hitting stray balls directly to the ball crew, as was the former ball boy’s usual. Instead he was hitting dead balls into center net, rolling them off his heel to nowhere near anyone, and dropping a towel on the court, rather than on the wall. It was all very un-Federer-like, but the ball people kept grinding. 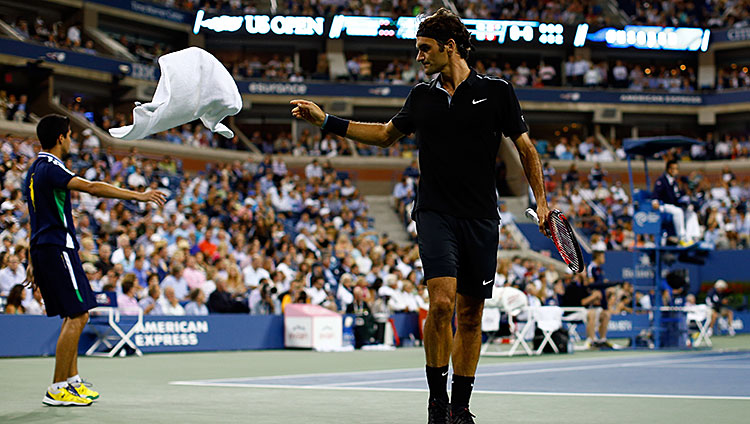 With Monfils at double match point on Federer’s serve, the ball boys on the back walls froze. This is the rule. Zero movement on match points.

Federer seemed to use this moment of stillness to gather himself and become Federer again. From this point on, the ball crew made zero mistakes, working with very Federer-like efficiency and skill. Match point. Deuce. The back positions were moving again. Federer won the game. 5-5.

The sold-out crowd, until this point fuming over Monfils’s disrespectful destruction of their white knight, was wilding out. Monfils walked to the corner and politely asked for a towel. (He is always this polite, according to ball people who work his matches.)

Federer was moving through points at lightning pace. He won the fourth set, and the ball people had become invisible. Federer seemed to recognize the return of harmony to the universe, perfectly stroking loose balls to their positions. All movement on the court became subject to Federer’s will, and suddenly, it was over and the PA was playing “The Imperial March” from Star Wars, as 22,000-plus in the stands took selfies. Cameramen, interviewers, security officers, and various postmatch staff streamed onto the court as Federer waved to his people. The ball people were nowhere in sight.

Peter Macia (@petemacia) is a writer and editor living in New York City.