NFL Week 1 Winners and Losers: There Will Be Watt 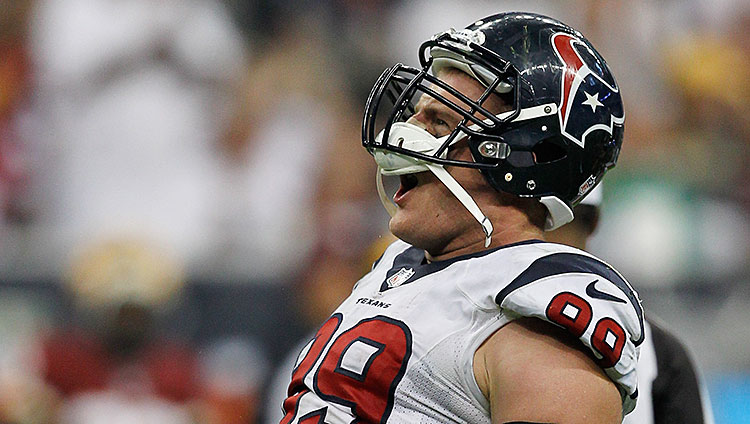 Miami’s offense had its high points yesterday, and I’m definitely looking forward to Mike Wallace’s redemption tour. But the stars of the Dolphins’ upset were the guys along their defensive line.

You know about Cameron Wake at this point. He had 8.5 sacks a year ago despite playing most of the season on a gimpy leg. After one game this year, he’s nearly a quarter of the way there. He also caused two backbreaking fumbles from Tom Brady, including one late in the fourth quarter that put the game away for Miami.

The Dolphins had four sacks overall and hit Brady a total of six times, but their effect went a lot further than that. Brady completed barely half his passes (29/56), and when he did, they weren’t going for much. He averaged a paltry 4.4 yards per attempt — in part because the Patriots still lack much of a down-the-field receiving option, and in part because he wouldn’t have had the time to find one anyway. Miami swung and missed with its linebacker signings a year ago, but they boast one of the deeper and more talented fronts in the league. Olivier Vernon had 11.5 sacks a year ago and is still just 23. The underrated Randy Starks is back, and Miami has replaced the gap-plugging Paul Soliai with the penetrating Earl Mitchell. And that’s without last year’s third overall pick, Dion Jordan, who’s suspended for the first four games of the year. Miami’s defense has its holes, but a great pass rush is the best way to mask other problems.

I hope you enjoyed your nine-month break.

Six days after signing a $100 million deal (with about $51 million guaranteed) that made Watt the richest defensive player ever, he again showed why he’s on his way to maybe being the best defensive player ever. Houston paid Watt like a quarterback because he affects games like a quarterback. In the Texans’ 17-6 win on Sunday, Watt had a sack, would have had another but drew an intentional grounding flag instead, blocked an extra point, recovered a fumble, and spent the afternoon making Robert Griffin–size cartoon imprints in the turf. Depending on the source, Watt hit Griffin five, six, or seven times. It doesn’t really matter. Griffin spent the entire game running for his life.

We don’t get players like Watt very often. I already regret not picking him for defensive player of the year. I guarantee you he knows — not because he reads or listens. He just knows.

Plenty of players put up similar numbers to Antonio Brown, who had five catches for 116 yards (including this beautiful touchdown) against the Browns. But Brown was the only one to drop-kick another player in the face.

A lot of people have called it a dirty play; some have wondered if Brown might even get suspended. We should probably take a step back. Yes, it was dangerous. No, I don’t condone kicking people — punters do count — in the face. But I’m going to say the synapses are probably firing pretty quickly while you’re suspended in midair and the person below you is tasked with slamming you to the ground. Like most of what Brown does on the football field, it was amazing to watch at full speed, and even more incredible slowed down. I feel for Spencer Lanning, but come on.

Matt Ryan had some help throwing for those 448 yards. Antone Smith teleported for the final 45 yards of his 54-yard touchdown catch, and Julio Jones’s fumble was still more impressive than anything the Bucs did on offense yesterday. New Orleans had a top-10-type defense last year; maybe that was a blip before the Saints fall back off this season. Or maybe Ryan and the Falcons are set to rain fire on teams. Smith, Devonta Freeman, and Jacquizz Rodgers (who had a 17-yard touchdown burst) give the Falcons plenty of backfield pop, and Jones looks healthy and ready to take over the world.

Atlanta’s problem is shaping up to be the same one it had last year. After the team lost left tackle Sam Baker to a ruptured patellar tendon (again), Jake Matthews got his ankle rolled up and was out for the game. That meant Gabe Carimi — a former first-round pick, now on his third team in four years, was playing left tackle.

Cordarrelle Patterson’s Play of the Week

I’m just going to carve this section in digital stone. The rest of the league was playing football this weekend. Cordarrelle Patterson was doing something else. Patterson now has a run of 35 yards or longer, in three straight games. I would follow that with and he plays wide receiver, but I don’t even know what that means anymore. Norv Turner coordinated offenses for the early-’90s Cowboys and is now running jet sweeps with Cordarrelle Patterson. Brian Schottenheimer was worrying about prom in the early ’90s and still has no idea what to do with Tavon Austin.

Man, what a day. Brandin Cooks did the impossible, justifying the hype he got all throughout training camp. Undrafted Allen Hurns caught not one, but two touchdown passes for the Jags. Sammy Watkins didn’t explode, but he more than looked the part against Chicago, catching three passes and generally running by people. All that, and then Kelvin Benjamin went and did this:

Add Jordan Matthews, and it should be a fun year with this group.

Let’s talk about the Josh McCown fumble-pick. Don’t watch it more than twice, or you’ll never stop. It’s like great art — entrancing. There’s something fundamental in there that’s hard to pin down.

Did you stop? OK, good. Finding the best part of that play is tough, but I think I know what I’m going with. Say he gets that throw off. As he’s trying to throw it, Mike Evans is actually standing behind the line of scrimmage. If the ball gets to the target, there’s a good chance it would have been another fumble. Somehow, I think that might have been better.

The Bucs looked downright awful offensively — from McCown, to their pass protection, to their ability to do anything on the ground. McCown’s frontcourt of receiving options had its moments, but you can’t throw jump balls to Evans, Vincent Jackson, and Austin Seferian-Jenkins — who I’m convinced is taller than Kevin Garnett — without the time for those plays down the field to develop. McCown was hit seven times on Sunday, and it looked like the Bucs’ offensive line problems went further than Logan Mankins’s injury. Let’s hope their struggles had more to do with Carolina’s nasty front seven than anything else, or it’s going to be a long year.

Don’t think I have to explain that one.

That Brief Moment Before Everyone Gets Hurt

Texans fear No. 1 overall pick Jadeveon Clowney has a meniscus tear that could require arthroscopic surgery, per source.

Wasn’t that glorious, the 30 or so minutes we got of football before everyone started getting helped, carried, or carted off the field? I already mentioned Matthews. He might have a high-ankle sprain, but it’s apparently not too serious. Evan Mathis, the Eagles’ excellent left guard, left their game against the Jags. It’s reportedly a torn MCL, according to the Philadelphia Inquirer’s Jeff McLane. The health of the Eagle’s offensive line was an underrated part of what kept their offense churning last year, and now they’re without both Lane Johnson (suspended) and Mathis.

And that’s still only the second-most depressing knee-related news of the day. Per the Adam Schefter tweet above, Jadeveon Clowney may need surgery to repair a torn meniscus. It’s terrible news, considering Watt played well enough yesterday that I was looking forward to the league forcing the Texans to adopt NBA Jam rules and playing only two guys on defense.

Some other notable, shitty injuries:

• Logan Mankins hurt his knee in his Bucs debut, which doesn’t bode well, considering Tampa’s running backs average 1.6 yards per carry after you take out the 54-yarder by Jorvorskie Lane.

• Chiefs linebacker Derrick Johnson, who’s long been one of the more overlooked players around, tore his Achilles and is out for the season. Kansas City’s defense wasn’t looking great when it was healthy, and a game into the season, they’re already without Johnson and lineman Mike DeVito.

• Second-year Bengals tight end Tyler Eifert dislocated his elbow, which both sounds painful and should keep him out for a while. A.J. Green and Giovani Bernard should be able to shoulder most of Cincinnati’s receiving load, but this was supposed to be a big year for Eifert.

I’ve started to think of Tony Romo the same way I think about haunted houses — those experiential ones, where they can touch you and shit. Every year, I manage to convince myself that last year, maybe it wasn’t so bad. C’mon, I tell myself, it’s fall. You should go. This time could be more fun. Guess what. It’s never fun. It’s creepy and awful, and there’s no reason anyone should go through it.

A week in, and we’re already at the place I dreaded for the Cowboys before the season started — a place where they’re down by so many points that their fantastic offensive line and running back don’t even matter. Romo didn’t help the cause yesterday, but his defense didn’t exactly dig in either. I’ll let that commentary to Ty Lawson, who passed along the perfect message about the Dallas defense: