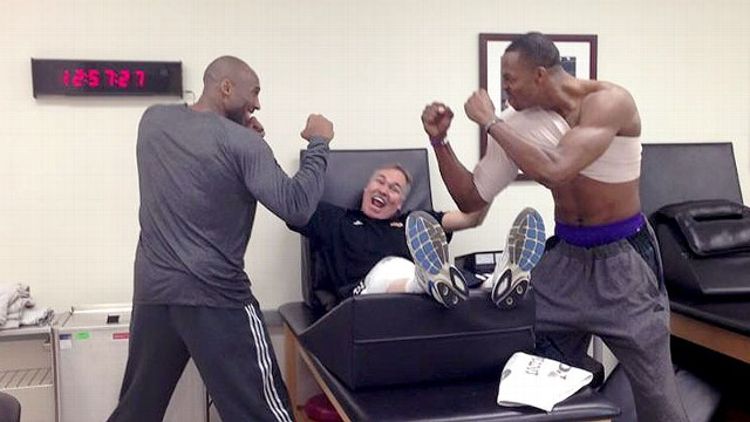 Don Draper always advises his clients with an aphorism: “If you don’t like what’s being said, change the conversation.” That’s decent advice for addressing a short-term problem about the perception of a brand or company, but it doesn’t do anything to actually solve a business’s core problem. This year, the Los Angeles Lakers have completed their evolution into one of professional sports’ most prolific organizational failures. They have changed the conversation so many times in the past year that they have failed to actually confront any of the problems that have lingered with the team since their last championship in 2010.

Being in a massive market with a built-in fan base does present a unique set of challenges and opportunities. The Lakers are different from small-market teams, whose business models can’t take on the same risks that the Lakers can assume annually and unload several years later. Superstar players are attracted to life in L.A., maintaining the casual fan’s attention with ‘buzz-worthy’ names and the addition of free agents coming off overachieving seasons. The excessive media attention on the Lakers and Kobe Bryant sometimes makes us wonder why they get special treatment, as if they are any different from the 29 other teams that will come up short every year.

This season, we couldn’t look away from the train wreck, the soap opera, or any other phrase for ‘complete disaster’ that were the Lakers. The Lakers were bad, but we kept talking about them.

The Lakers’ 2011-12 season ended when they were eliminated by the Oklahoma City Thunder in the second round of the playoffs. Their elimination finally proved that Ramon Sessions and Steve Blake weren’t viable backcourt options, and that Andrew Bynum wasn’t worth dealing with in the long term. At that point, there were three clear ways the Lakers could improve: add quicker point guards who could attack the basket and defend; get younger and more athletic on the perimeter (potentially finding someone who could make corner 3s); extend Kobe’s run by saving him from overuse during the regular season. If you were going to win the West, it would require containing Russell Westbrook, Tony Parker, and Chris Paul, or at least attempting to offset their production.

• On July 5, 2012, the Lakers changed the conversation about last season’s failure by adding Steve Nash. Does it matter that he’s old and was entering Mike Brown’s Princeton offense? Two-time MVP, finally playing for a contender — Kobe, Steve, and Pau will figure it out. Never mind that he can’t defend and requires the ball in his hands to create offense. Steve Nash never really got healthy, never found a place on the team, and never really looked like ‘two-time MVP Steve Nash.’ Now he looks more like a future expiring contract.

But at least it changed the conversation?

• On August 10, 2012, the Lakers acquired Dwight Howard from the Orlando Magic, unloading Andrew Bynum and taking a gamble on the least likable ‘superstar’ in the NBA. More important, they rolled the dice on a player who hadn’t yet recovered from a significant injury that he said sometimes leaves him unable to feel his feet. The idea was that the West Coast sun would cure his injury and life in L.A. was going to be so good to the attention-loving Howard that he would become a Laker forever. Forget the fact that his preferred destination was Brooklyn. The early part of the season left us all wondering what happened to Dwight. Was he ever going to be a dominant player again? Did he even care about winning? Is he not playing hard or is it his injury that makes him look like such a stiff? Was he going to re-sign with the Lakers in the offseason? Are we just being mean to this guy who is maybe playing through lots of pain to prove everyone wrong?

Aside from all of those issues, the addition of Howard introduced a disruptive locker-room culture clash with Kobe Bryant’s ‘win or die’ philosophy. Why are they bringing in the carefree guy whose interest in the game has been widely questioned? The same guy whose post game is a self-serving vanity project that doesn’t actually help the team because he can’t pass out of it? The only reason to believe it would go well is simply because ‘it’s the Lakers.’ But at least it was a disruptive change in the conversation about the franchise.

• On November 9, 2012, the Lakers fired Mike Brown after starting the regular season 1-4 (and a winless preseason before that). It was a hire that was doomed from the start, and not just because Phil Jackson’s shadow loomed large. There were too many moving parts amid the flaws in personnel and the transition from the triangle offense to the Princeton offense. It was an unrealistic identity shift with so many players needing touches in order to produce and assume their (previous) identities on the court. Firing Brown was premature, but it felt like the Lakers were saying ‘We’re gonna fire him sometime in the next five years, so it might as well be now.

The Lakers were able to change the conversation by floating out Phil Jackson’s name as a potential hire, then shafting him and bringing in the ‘offensive genius’ who enabled Steve Nash’s MVP seasons and was apparently one of Kobe Bryant’s favorite players when he was living in Italy in the ’80s.

• On November 12, 2012, the Lakers hired Mike D’Antoni. He still had to recover from knee replacement surgery and arrived a few weeks later. What ensued was a series of questionable decisions by a coach who was unwilling to adjust to the players on his roster, such as his decision to play Jordan Hill and Earl Clark over Pau Gasol. When Gasol was in the game, he was encouraged to do the best he could 18 feet from the basket. He was reluctant to use a ‘Twin Towers’ setup for stretches in the game, unless his hand was forced by injuries. After his inability to adapt to the New York Knicks, it is almost impossible to see him as the coach of an NBA contender.

Will they fire him this offseason, or wait until five games into next season?

• On January 7, 2012, word spread about an alleged physical altercation between Kobe Bryant and Dwight Howard following a game of New Year’s Day. Before that controversy could grow, Bryant tweeted a photograph of the two ‘play fighting’ above Mike D’Antoni. The moment illustrated their place as darlings in the speculative media, but also Bryant’s primary 2012-13 narrative, his evolution into a social media force. A month later, Howard’s father somehow entered the Lakers news cycle. He said that Kobe and Dwight should probably hug it out so they can win a championship. They basically did and had a decent playoff push, considering the deep hole they dug for themselves at the beginning of the season. At some point, Dwight Howard also developed his comedic impression of Kobe Bryant.

• On April 12, 2013, Bryant tore his Achilles. In the games leading up to his tear, he was being a ‘gamer’ for refusing to sit on the bench. We celebrated him and legitimately mourned his loss, even though his injury was positive for his emerging social media presence. Never mind the organizational failure behind allowing an NBA veteran to play endless minutes — the conversation was focused on Kobe (before and after his injury). The Lakers went on to win two games without him to finish out the regular season.

For some reason the conversation changed again. There was so much hope, despite the terrible regular season.

Maybe this team could overtake the slumping Spurs? The Spurs’ lack of interior presence could be overpowered by Dwight and Pau Gasol. Steve Nash was coming back (despite being a complete stranger for the majority of the year). Mike D’Antoni had finally figured it out (by having so many injuries that he had to use Gasol and Howard together). During Game 1, the story was focused on Bryant’s in-game tweeting. The television broadcast highlighted his commentary. Never mind the fact that the Spurs had completely solved the Lakers in the first half of that game. The conversation focused on Kobe’s social media brand.

• The Lakers went on to suffer their worst home postseason loss in franchise history, dropping Game 3 to the Spurs by 31 points. However, there was a bright side: The world was introduced to Andrew Goudelock. We learned that he was a prolific scorer at the College of Charleston and the 2012-13 NBA D-League MVP. He had a really good game and might be the solution to the Lakers’ point-guard woes. Maybe this was all a blessing — the kid can play.

• Last night, Howard was ejected from Game 4 in a moment that was a microcosm for his frustration with his team, his season, his body, and his own career decision-making. When Gasol was removed from the game he was showered with sympathetic applause from the remaining fans in Staples Center. Bryant limped to the bench for some reason. It was the end of the Lakers’ season. They don’t have younger, faster point guards. They don’t have the right team for D’Antoni’s inflexible system. They don’t know if Howard is actually a max-contract player based on his physical and emotional state. They don’t know who their franchise cornerstone is. They don’t know how quickly Kobe’s body can heal and if he can come back at a high level.

The conversation changed so many times, often in compelling fashion, but the franchise is in worse shape than ever.

Then again, maybe the Lakers don’t actually have any problems. There isn’t a ‘curse’ associated with being the Lakers. Simply ‘being the Lakers’ will solve their problems, keep us interested, and flawlessly transition their team into a post-Kobe era while integrating Kobe at the same time. If it weren’t for the Heat’s win streak, the Lakers would have been the most memorable team of the 2012-13 NBA season. I guess it doesn’t really matter what happened — the Lakers are only really in trouble when they aren’t the topic of conversation.