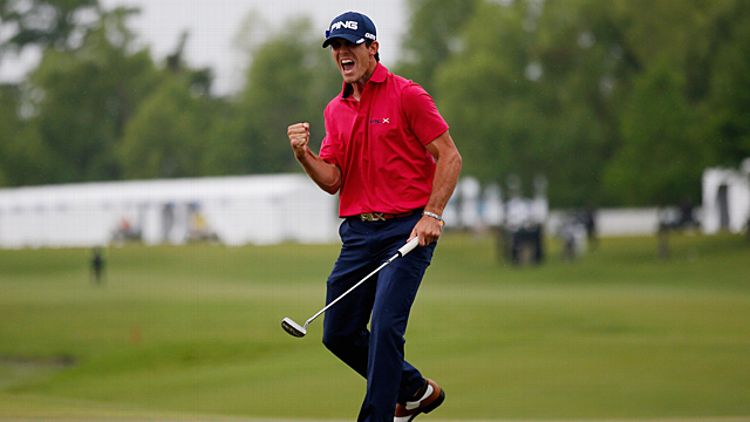 Let’s set the scene: Billy Horschel is 26 years old and has never won on the PGA Tour. He’s been to qualifying school four times, passed the test three times, but is at that stage of his career when he’s at risk of becoming the equivalent of a career Triple-A baseball player. He’s starting to put it together in 2013, though. The last month has been particularly impressive, with three top-10s in a row and a second-place finish at the Shell Houston Open.

So here he is at the Zurich Classic in New Orleans, starting Sunday’s round two shots off the lead. It starts off with four pars, and then there’s a weather delay that lasts nearly three hours. When he returns to the course, he gets hot — really, really hot. Six-birdies-in-a-row hot, and suddenly he’s in the lead. He takes it all the way to 18 — one shot up on D.A. Points, the man who beat him in Houston — where he hits his drive in the left rough. And then?

The weather horn. The most brutal weather horn imaginable, maybe. Another delay. Back to the clubhouse, where there’s nothing to do but think about the stakes: A win here means $1.19 million and a critical two-year Tour exemption. No more qualifying, no more insecurity, at least for a couple years. The next few shots he hit could make or break his professional future.

Fifty-two minutes later, he’s back on the course, and if he wasn’t nervous enough, Points puts his bunker shot on the par-5 to within five feet. Horschel’s birdie putt is 27 feet, and for him to avoid a playoff, it needs to go down.

To recap, Horschel won by shooting a course-record tying 64 on Sunday, nailing a 27-foot putt on 18, and capping it all off with a celebration of such intensity that it was basically the golf equivalent of this. Not a bad way to become a PGA champion for the first time in your life.