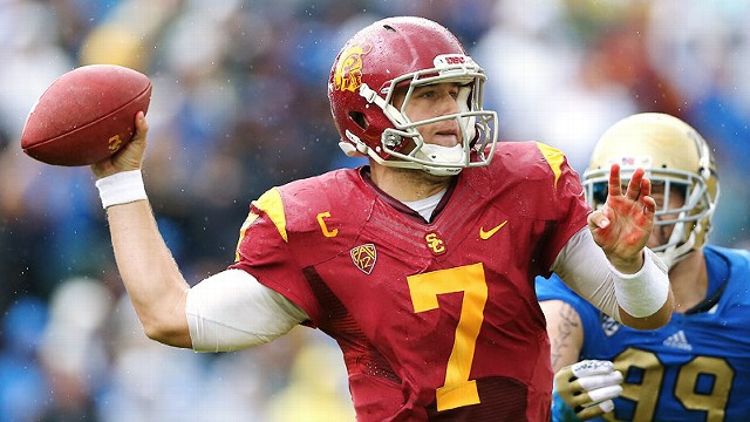 The Philadelphia Eagles’ selection of USC quarterback Matt Barkley in the fourth round of this year’s draft appears, by any logical measure, to be a great value pick. At one time, Barkley was talked about as a high first-round pick, and there’s no doubting his precise footwork or his accuracy on short and intermediate passes. That’s saying nothing of his personality and whiteboard smarts, which coaches and scouts have raved about since he started as a true freshman at powerhouse Mater Dei High School.

Barkley steadied USC through the loss of Pete Carroll to the NFL, NCAA sanctions that limited scholarships and depleted the Trojans roster, and the often bizarre antics of his coach, Lane Kiffin. Barkley’s final season at USC, one in which the Trojans began the season ranked no. 1 in the country before finishing 7-6, was one to forget. His play was inconsistent, and he finished the year on the sideline after suffering a shoulder injury against UCLA. But for Chip Kelly and the Eagles, grabbing such an accomplished player in the fourth round should qualify as the quintessential “value” pick.

What’s disorienting isn’t that a team would grab Barkley in the fourth round; it’s that this team would. Playing for the Eagles now means playing for Chip Kelly, the maestro of Oregon’s read-option-infused spread offense. Barkley, for all his strengths, is clearly not a quarterback you want running the football, and although quarterback runs weren’t the focal point of Kelly’s offense, a quarterback who could pull the ball and take off was a key part of what made that offense go.

After making the pick, Kelly raved about Barkley’s accuracy, maturity, and toughness. “We’re going to take the best value on the board,” Kelly said after the pick. “There was no better value for us to open today, and we took Matt. He’s the all-time leading passer in USC history. He’s one of the great all-time quarterbacks to play in the Pac-12. He has all the intangibles you’re looking for.” And at Oregon, Kelly had front-row seats to see what Barkley could do.

The reaction from the NFL media — and from Kelly — was to emphasize that he’s really not committed to any certain kind of quarterback; he just wants a good one, and he’ll design his offense accordingly. “Matt Barkley can get you in the end zone,” said Kelly. “I think a lot of people have assumptions about what we’re looking for in a quarterback. We’re looking for a quarterback who can help us score points and lead us to victories, and Matt can do that.” Given the amount of time I’ve spent studying Chip Kelly’s offense and the amount of respect I have for his football mind, I’m sympathetic to this argument. He’s coached different offenses over the years, and, by all accounts, he’s as steeped in football history and the foundational aspects of why plays work as any coach in the NFL today.

Kelly’s staff in Philadelphia further supports this view. Kelly said he wanted offensive and defensive coordinators with NFL coordinator experience, and in Pat Shurmur and Billy Davis, that’s what he got. Throughout this offseason, Kelly has made clear that he wants the Eagles to be something of a laboratory for football ideas, whether it be X’s and O’s or the science of peak athletic performance.

But this line of thinking still has to be tempered with a bit of realism. Kelly is clearly bright, committed, and open-minded, but the idea that he can step into the NFL and run any offense — spread, pro-style, West Coast, Coryell, Wing-T — seems implausible. He shredded college football running a very specific attack based on very specific principles, and the mathematical advantage he gained from having his quarterback be at least some kind of a threat to run was a central tenet. He might be able to adapt his offense to his players and coaches, but this is not the same thing as continuing and growing what worked at Oregon.

One likely possibility is that keeping Nick Foles on the roster and drafting Barkley in the fourth round is nothing more than a hedge. Although the NFL’s elite last season essentially used one of the two apparent foundations of Kelly’s Oregon offense — either the up-tempo no-huddle (Ravens, Patriots, Broncos) or the read-option (San Francisco, Seattle, Washington) — Kelly is smart enough to know that defenses might have more answers than they had last season.

There is another possibility, though. In addition to drafting Barkley, among the major moves Kelly made was signing tight end James Casey in free agency and drafting Stanford tight end Zach Ertz, two movable chess pieces to go along with Philadelphia’s other multipurpose tight end, Brent Celek. These moves might be an indication that Kelly’s focus is shifting from the roster of speedy running backs and dual-threat quarterbacks he had at Oregon. Instead, Philadelphia may be looking to mesh the fleet-footed receivers already on its roster with a group of dynamic tight ends. As part of that group, Kelly is likely hoping Barkley can be an extremely accurate, intelligent, intangible-heavy quarterback who can efficiently operate his lightning-fast no huddle.

Kelly, who grew up in the northeast and coached at New Hampshire before Oregon, wore a shirt at his Sunday press conference that said “Massachusetts State Police.” His intellectual relationship with Bill Belichick has been well documented over the years, particularly as Belichick has embraced Kelly’s frenetic no-huddle philosophy. Indeed, if the moves Kelly has made over recent weeks are any indication, then I’m not so sure Chip Kelly is trying to bring Oregon to Philadelphia. Instead, he might be trying to bring New England.