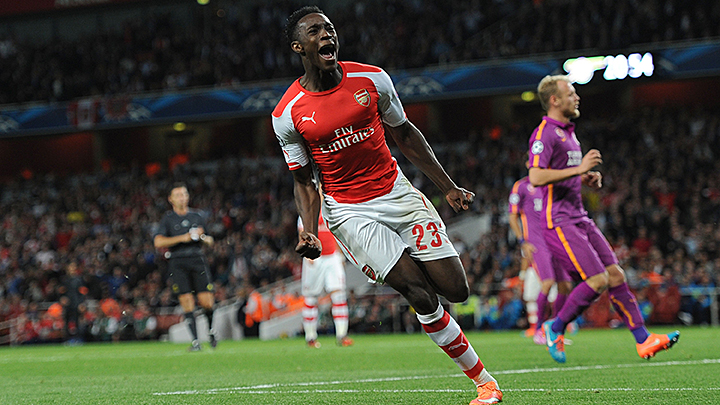 The second round of UEFA Champions League group-stage matches provided a great deal of narrative confirmation. Liverpool haven’t figured out how to attack without Luis Suárez or Daniel Sturridge in the lineup. Despite an influx of exciting young talent, Barcelona still have defensive issues. Gervinho can’t score on English soil, but scores at will in every other country. Bayern Munich, Real Madrid, and Borussia Dortmund — the three teams that took all six points through the first two matches — remain among the early favorites in the competition.

The second round also provided us with some new information and thrilling moments to parse out:

It was a rough midweek slate for United faithful who were forced to watch this competition from the sideline, only to see two rejected parts play starring roles. Former United forward Danny Welbeck scored a hat trick, as Arsenal grabbed a crucial three points at home in a 4-1 win over Galatasaray. His goals all had a similar shape, with Welbeck firing far post after beating Felipe Melo in Gala’s three-man back line. In each case, Welbeck had to create the chance, and each time he finished clinically. It was a confident display for Welbeck, in a favorable matchup, that will help him settle in North London.

Meanwhile, in Belgium, Dortmund midfielder Shinji Kagawa was doing this to hapless RSC Anderlecht in the third minute of Dortmund’s 3-0 win:

Kagawa’s move back to Borussia Dortmund, where he was named Bundesliga Footballer of the year in 2012, was very exciting, as his talent was broadly misused at Manchester United. There was a hubris to how Kagawa was shoehorned into United’s side; Kagawa is a capable wide attacking midfielder, if he’s allowed to occupy the half-spaces rather than hold the sideline, but he’s at his best playing centrally. Unfortunately, he needed to occupy the same space as Wayne Rooney, and he was moved around to accommodate the English captain. His performances under Alex Ferguson were disappointing but not disastrous. During David Moyes’s doomed tenure at Old Trafford, Kagawa was rendered invisible — he had no part to play in the cross-heavy system.

Kagawa’s plight in English football is not unique for former Bundesliga stars. Mesut Özil is currently playing out wide for Arsenal. Özil is best in the center of the attacking midfield band of a 4-2-3-1. In the 4-3-3 that Arsenal manager Arsene Wenger favors, Özil’s lack of defensive discipline makes him a problematic central midfielder. Given Wenger’s current options, Özil’s deployment makes sense, even if it blunts his ability to control a match.

Dortmund midfielder Nuri Sahin was also played out of position in England, when on loan at Liverpool. Sahin was brought in to steady Liverpool’s midfield, but was pushed out of his preferred role by an aging Steven Gerrard. Unable to displace Liverpool’s captain as a traditional no. 8, Sahin was used as an attacking midfielder to poor effect.

What Dortmund manager Jürgen Klopp can offer Kagawa is an understanding of his skill set. Dortmund have a lot of central attacking midfielders, including the injured Henrikh Mkhitaryan and Marco Reus, but Kagawa is unique among them in his ability to distribute the ball from advanced positions. Klopp won’t force Kagawa out wide or bury him on the bench. He’ll deploy him when patient attacking play and unlocking defenses is what’s needed in a given matchup. And if yesterday was any indication, Kagawa will thrive accordingly.

After seeing their team go down 2-0 to Arsenal at the Emirates, the traveling support of Galatasaray responded as any of us would: They threw a bunch of flaming projectiles onto the field. This provided the world with a live television moment that needs to be broken down to be fully processed: 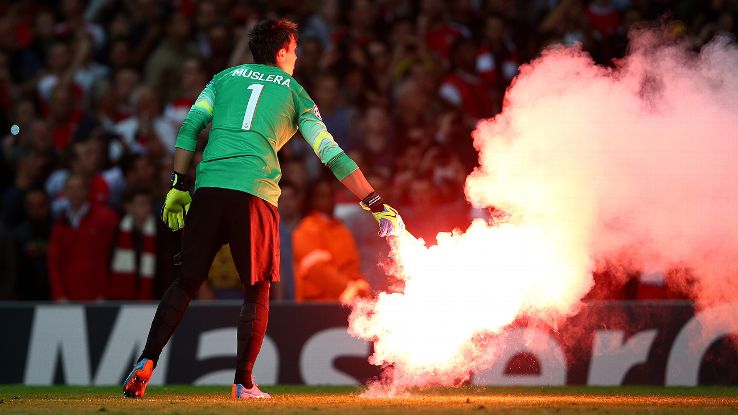 1. Galatasaray goalkeeper Fernando Muslera (wearing green) is picking up the lit flares and throwing them off the field of play. He does so with the resigned look of a man who has picked up lit flares and thrown them off a football pitch before. He probably has. (As Spencer Hall wrote about last year, Galatasaray has likely seen every variant of violence that a professional soccer match can provide … these same fans attempted to tunnel into a match at Schalke in 2013.) At this point, he is only holding the last flare, which has burned itself out. The rest are already in a pile behind the touchline. 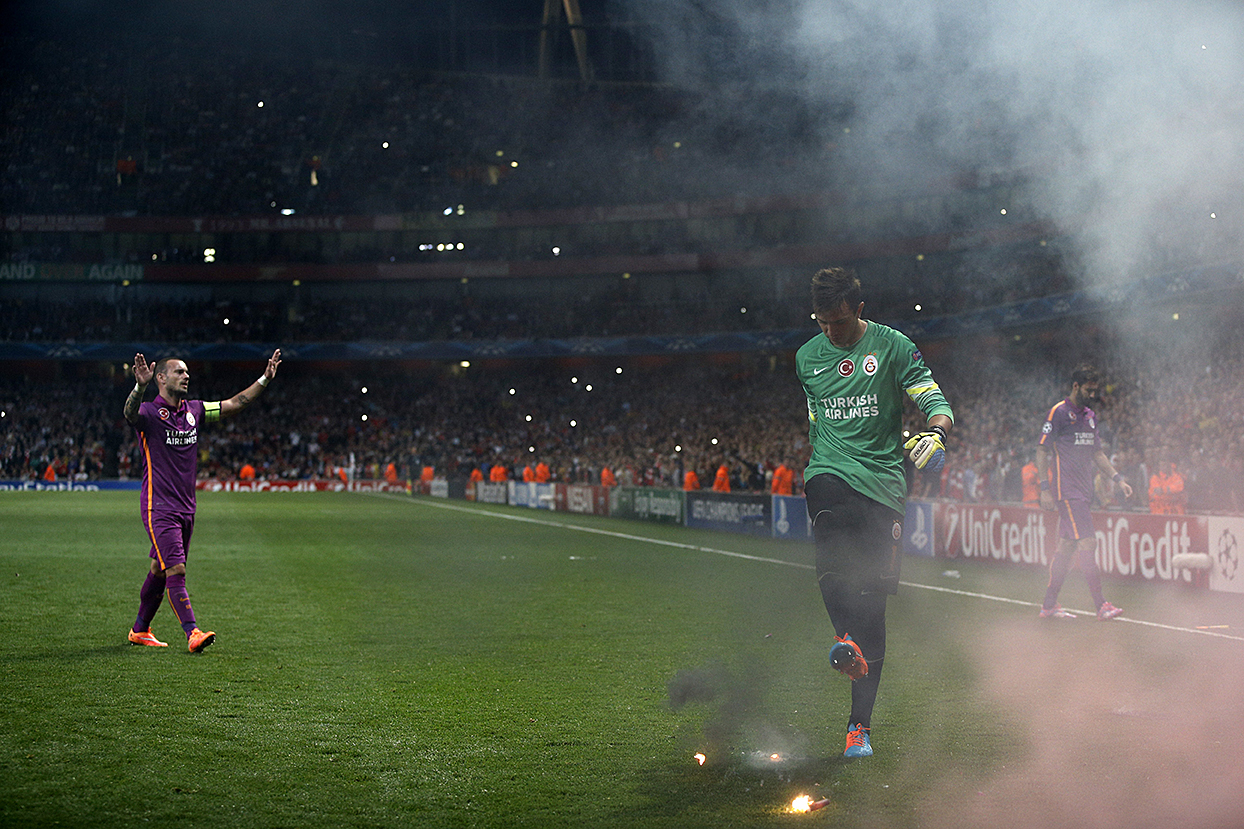 2. Galatasaray captain Wesley Sneijder (no. 10 in purple) is standing in front of the away fans, pleading with them to stop throwing flares onto the field. Sneijder has won the Champions League with Inter Milan, and he has claimed that the only factor keeping him from transferring to Manchester United this past offseason was the prospect of Champions League play. Losing to Arsenal heavily damaged Gala’s chances of advancement, and the manner in which the loss played out (beset by flaming projectiles) means Sneijder is unlikely to be long for the Turkish club.

3. Arsenal’s steward (in orange) is forced to walk over to the flares with a pail of water to extinguish the flames. The image of a neon-coated British man calmly pouring water on a flaming projectile was something out of Children of Men.

Faced with the all-but-impossible task of fending off reigning Champions League winner Real Madrid, Bulgarian heart-stealers Ludogorets were, for the second consecutive Champions League match, inspired in a 2-1 loss to a former European champion. Ludogorets grabbed the opening goal in the first 10 minutes, and then saw goalkeeper Vladislav Stojanov channel central defender Cosmin Moti’s qualifying-round heroism, pushing aside a well-earned Cristiano Ronaldo penalty. But Ronaldo would employ the dark arts to get another shot at penalty kick glory.

What you’re seeing here is Ronaldo in the box, brushing up against a defender’s arm, and then falling to the ground. This is the sort of contact that is called maybe 10 percent of the time. But here’s the rub: The defender on this penalty is Cosmin Moti.

Maybe you’re comfortable using the dark arts of diving to defy the capital-N Narrative, as Ronaldo did here. But to do so directly at the expense of Moti? While playing against a team from the forests of northern Bulgaria that employs an actual eagle named Fortuna as their mascot? Ronaldo has done a lot of things I can’t or won’t do, like score 69 career Champions League goals, or pose in front of a giant picture of himself wearing underwear. But to risk the cosmic wrath of Moti and Fortuna? Even for a man with Ronaldo’s special set of skills, that seems highly ill-advised.