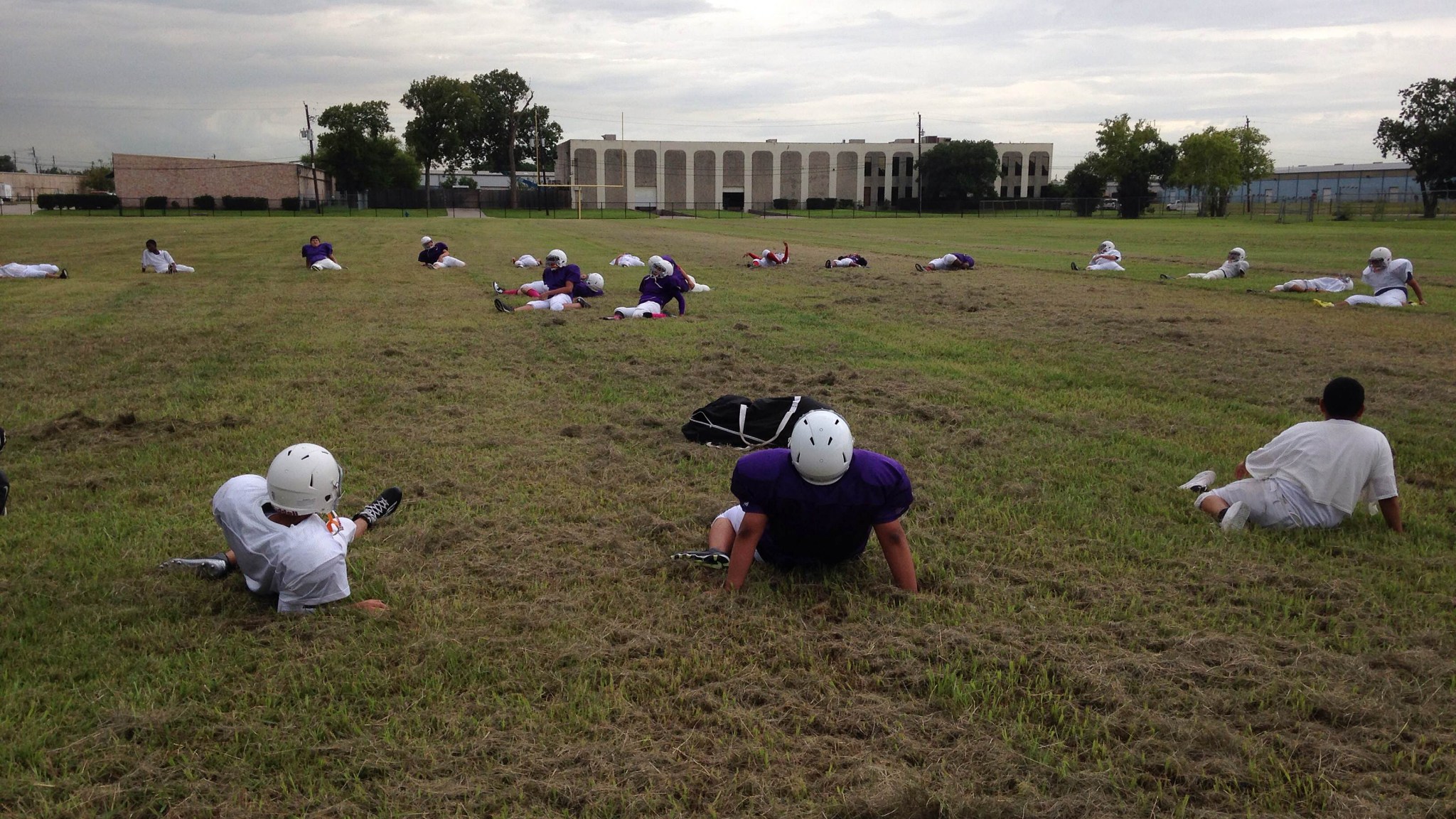 Ten months ago, the middle-school football team that I assistant-coach celebrated its third zone championship in four years. I wrote about the season for Grantland. It was the most dominant of our championship runs, our team guided to a 7-0 record by a running back who played football like he was one of the monsters in that old Rampage video game, a receiver who was born with hands coated in superglue, an outside linebacker who turned the left side of the field into his own personal death chamber every game, and a movie-star quarterback who had begun being scouted by the city’s best high schools after his first game as a seventh-grader.

Two weeks ago, the middle-school football team that I am assistant-coaching this year started practice. Our first game is in a week. And I’m going to be writing about all of it here again. I’m very excited.

Welcome back to Tuesday Night Lights.

Since I wrote this same column last year, I am just going to grab the first few paragraphs from that piece’s “Legacy” section, because I’ve not changed schools, so all of it is still true:

I work at a large, predominantly Hispanic, Title I school in South Houston — which is just a nicer way of saying that historically it has not fielded especially triumphant football teams. I seem to remember attending one game in my first or second year teaching (I’m in my [ninth] year, total); we lost by such a great margin that it was summarized in the following day’s morning announcements as our school having had “a very successful halftime show at the game yesterday.”

Since then, we’ve only grown stronger. [Five] years ago, our then–head coach left, opening up the spot to his assistant, who happens to be a goddamn football genius. He quickly made adjustments to shore up the defense (opting for a 3-4 set heavy on linebacker assaults, so as to flummox the opposition’s wide runs, which I think is the only play that the other coaches in our zone are aware exists) and unbuckling the offense (we remain the only school in our zone that throws the ball). The seasons that followed …

2010 season: 4-0-2, championship. This was our most surprising outing. We beat the then-reigning champs by two points in the title game. We should’ve lost by 30. We played it at night, at their field, and with a depleted roster. It was perfect. I will always love this group for its heart.

2011 season: 6-0, championship. This was our affirmation that the season before had not been a fluke (even though it definitely 100 percent was). It was the first time in our school’s history we’d ever finished a season without losing or tying a game. No boys have ever been more excited about being good at football then our 2011 team. It was like they thought that if they ever stopped working, their legs would fall off. I will always love this group for its enthusiasm.

2012 season: 2-4, tied for fifth in our zone. Oh, man. We had one good offensive player, one good defensive player, and 25 kids who’d decided they wanted to go ahead and give football a try. I will always love this group because of Tony the Tank. Tony the Tank was an angel of a kid. When he was a sixth-grader, he told me his dream was to score a touchdown in our homecoming game when he was an eighth-grader. When he did exactly that in 2012, breaking a 40-yard run for a touchdown near the end of the game, holding the ball straight up toward heaven as he ran the final 10 yards, a smile so wide and free that it was almost audible, that’s when I knew that the universe was a perfect place. Us losing almost all of our games that season was a fair trade in exchange for that moment.

2014 season: That’s what we’re here for. Our 2013 team’s place in campus history is so big and broad that it has blacked out the sun. This year’s team will play in its shadow until it can begin to radiate its own light.

The new zone we are in is made up of what many consider to be the best football middle schools in the city. It is less a zone and more a deep, dark, vicious jungle. Death waits to spring out at us from behind every tree, from underneath every bit of brush, to fall on our heads from the branches stretching towards the sky. I am excited, and I am also terrified. That’s the way football is supposed to make you feel, probably. If we can win one game, we will have had a successful season. Hell, if we can make it to the other side with all of our limbs, we will have had a successful season.

The Players Who’ve Stood Out So Far

The Rhino (running back, middle linebacker, eighth grade): He’s our most ferocious player. The first day of hitting drills, there were precisely zero kids interested in lining up across from him. I can’t even blame them, though. Have you ever seen that video where that guy lets Kimbo Slice tackle him for $100? Every play involving The Rhino looks exactly like that, except instead of you getting $100 for your trouble, you get, like, probably 60 percent of all the bones in your body broken.

The Ferrari (running back, outside linebacker, eighth grade): He’s not our fastest runner, but he is definitely our best runner. I think he might be able to tell the future. That’s the only explanation I have to explain the way he runs. Trying to tackle him is like trying to tackle a deer. If it’s you against him in the open field, then only thing you can hope for is that whoever is recording that moment on their phone doesn’t have a lot of followers on Vine.

The Great Wall (defensive tackle, right guard, eighth grade): All you need to know about The Great Wall: While explaining to the team about how much tougher all of the teams we’re playing this year are, our head coach shouted, “You gotta be hungry for it! You gotta be hungry for football!” The Great Wall shouted, “Coach, I’m starving!” It’s the only thing he’s said in our two weeks of practice. I didn’t even know he was born with a tongue before that moment.

Frog (quarterback, cornerback, seventh grade): At a recent practice, we had a quarterback challenge. The rules were simple: All the seventh-graders lined up on one side of the field, all the eighth-graders on the other. Frog and The Train, our eighth-grade quarterback, stood in the middle of the field between them. We set up a cone 15 yards away. Frog, who’s maybe 25 inches tall, and The Train, 5-foot-10 and 150 pounds, took turns throwing a football at it. The first QB to hit the cone 10 times won, and his team got to celebrate, while the losing QBs team had to do 50 push-ups. I expected Frog to be completely crushed by the pressure. He wasn’t. He shined. “Y’all can go on and get in push-up position, ’cause it’s a wrap,” he barked at the eighth-graders before he started. He won 10-8. Frog is a king.

3-D (wide receiver, cornerback, eighth grade): 3-D played for me last year. He touched the ball on exactly one play all season. It was a kick return. He caught it, saw the fray speeding toward him, then sprinted to the sideline, getting there before anybody could touch him. I laughed. “Come here, 3-D,” I called. “What happened?” He looked at me and smiled. “Coach, they were coming so fast.” I was very happy to see he was back this year.

(Note: 3-D is an all-world trash talker. He never stops. What’s best is, he hangs out with another kid on the team who is very big and very quiet. Together, they’re like a real-life version of Rocket and Groot. <3)

Coach: Who wants to try out for linebacker?

Kid: What does a linebacker do?

Every time we asked who wanted to try out for what, the same kid raised his hand. He’s already my favorite.