Tuesday Night Lights: It’s All Over 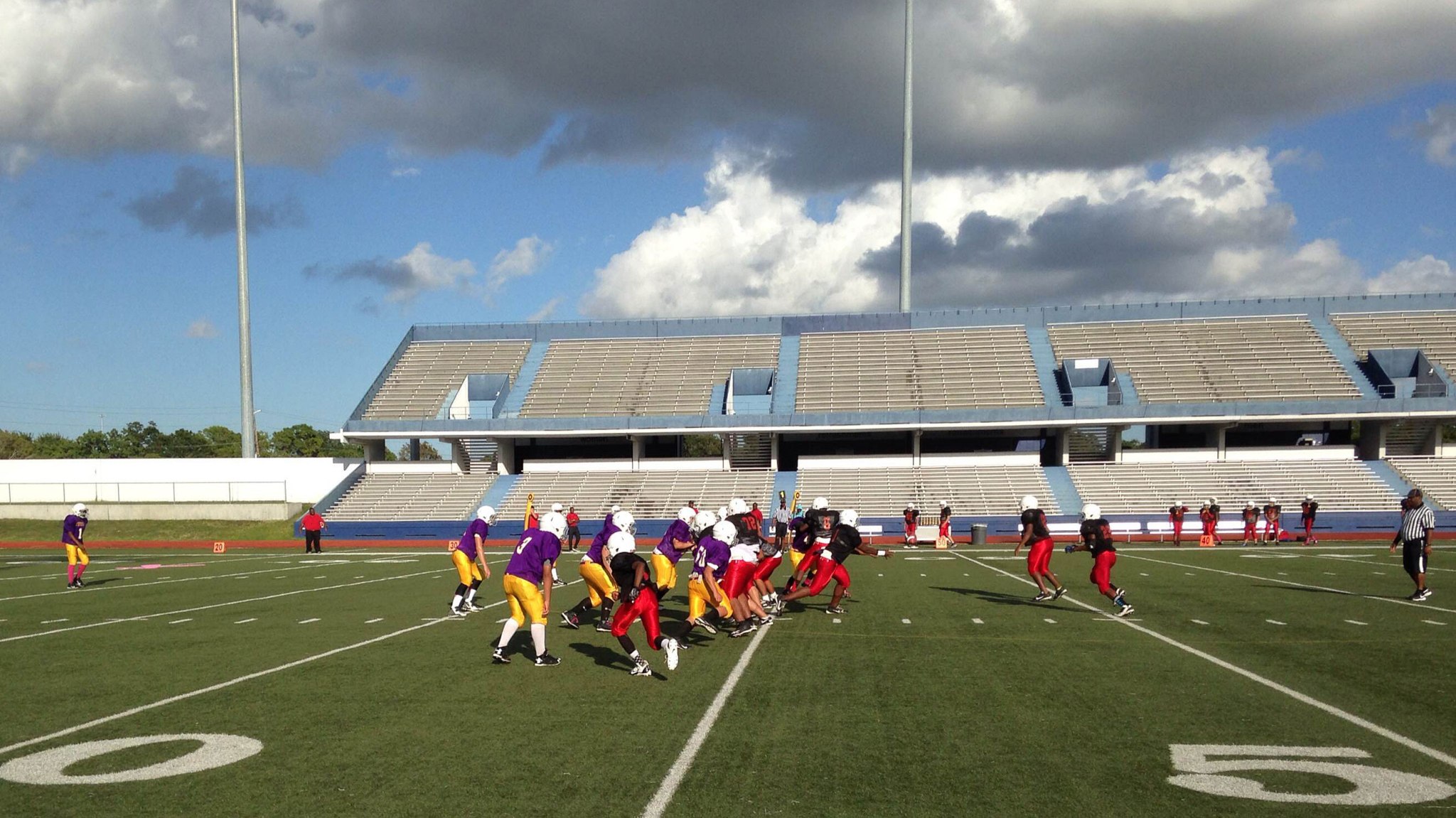 For the last nine weeks I’ve helped coach a middle-school football team. While the season didn’t necessarily turn out how I’d hoped (the main goal was that we’d play well enough that Roger Goodell would absorb us into the NFL and call the team the Houston Sheas or the Houston Serranos or even something more regal like the Shea Serranos of Houston), it was a positive and enjoyable two months. But now it’s done.

I kind of wish the football season were 20 weeks long. I’ll miss adjusting the players’ shoulder pads and explaining how to recognize blitzes and making up things like how one time I saw J.J. Watt in the parking lot of a 24 Hour Fitness, lifting cars up over his head. Coaching is so much fun.

These are the highlights.

The Best Game of the Season

In our second-to-last game, we played School O, the only undefeated team left in our zone and the general overlords of middle-school football. (School O eventually won the championship, of course.) Up to that point, we’d won one game all season and had managed to score zero points in four of them. School O was bigger, faster, more athletic — and I’m pretty sure at least two of its guys played for the Baltimore Ravens last season. It should’ve been a massacre; they should’ve beaten us by 40. But our boys picked that game, of all games, to show the universe what kind of humans they really are.

After giving up two quick touchdowns, our defense settled itself. School O’s running backs were ultra quick, but our middle linebackers were ultra nasty. One of them might’ve actually tried to do the Sub-Zero fatality from Mortal Kombat in which he yanks out his opponent’s spine. By the third quarter, School O was exclusively running wide to avoid them, but couldn’t escape. Our guys looked like sharks hunting seals. After those first two scores, we held them to one touchdown the rest of the game — and even that one came on a muffed punt. It was remarkable to watch.

What’s more, our quarterback, who had spent the entire season too nervous to throw the ball, finally let it go. His receivers rewarded his courage. The first pass went to The Rhino, the biggest and meanest kid on our team. He caught it in the flat, sacrificed the outside linebacker who tried to tackle him up to the cosmos, and then turned his horns upfield, pummeling his way 40-plus yards for a touchdown. On our very next offensive series, our QB, hungry for more glory, took a three-step drop, then threw the ball 35 yards downfield at The Ferrari, our most talented player. The Ferrari snatched it out of the sky over the cornerback, then vroooom-ed into the end zone and celebrated his own excellence by screaming loudly enough that we could hear him some 50 yards away. It was beautiful.

With two minutes left in the game — and School O trying to bleed the clock to death — our outside linebacker forced a fumble in the backfield. The Rhino scooped it up and ran it back 60 yards for a touchdown, a convoy of blockers running behind him not entirely sure what to do with themselves or their newfound confidence. It was great. It was so great.

We ended up losing 20-18, but nobody felt sad afterward. We scored more touchdowns that game than we did the whole rest of the season combined. I was very proud of the boys; they were proud of themselves. Sometimes football is real dope.

The Best Trash-Talking of the Season

“There’s no way you’re better than me. I’m the best at catching on the whole team. I’m like an iPhone. You’re like Cricket Wireless.” —a receiver to a lineman in the locker room after practice

The Most Intimidating Player of the Season

There are two types of very fast kids on football teams. There are the smooth runners — kids who are fast in a way that appears to require no effort, their cleats barely ever appearing to even touch the turf. And then there are the heavy-footed kids who, almost as an affront to the laws of physics, are fast, monster plodders who pummel the turf into submission. They push and they kick and they churn their legs violently, possessed of the same grace of a car engine tumbling down the stairs. The most intimidating player we faced this season — oh, man, he was the second kind. And it was terrifying. It was unreal watching him run. He ran so hard. He ran like he was trying to make the earth spin under his feet like those guys who spin logs in the water by running on them. You could almost hear him revving up, chug-chug-chugging along, his whole body trying to harness the crazy horsepower his legs were generating. Three separate times he broke runs longer than 70 yards, and each of those times he simply out-bursted our entire secondary. Following his second touchdown run, our outside linebacker walked over to me, exhausted. “Coach,” he said, “I don’t know what happened. There was nothing I could do. I was running my fastest. His fastest is faster than my fastest by, like, a lot.”

The Most Enjoyable Exchange of the Season

Receiver: You remember last year I had lymph nodes?

Receiver: I think they’re back, but now they’re on my knee.

Defensive End: What are you talking about, man?

[Receiver places the defensive end’s hand on what he believes is a lymph node.]

(It wasn’t a lymph node. It was his kneecap. Kids are so dope.)

The Most HOLY CRAP Moment of the Season

There’s a kid on the team named The Monster. The Monster is 6-foot-2 and 230 pounds. (He’s 13 years old, if you just really want to feel bad about yourself.) He played defensive tackle and fullback. Whenever the other team’s linebackers would start playing a little too close to the line, we’d start running a play called “Atom Bomb,” which was basically just hand the ball off to The Monster and let him blow up everyone in the fray at the line of scrimmage. On one of those, The Monster bowled over his guards and the defense’s tackles and middle linebackers, and then began trucking down the field. He got about five yards before a small-ish outside linebacker literally jumped on his back as if taking a piggyback ride. The Monster carried him for nearly 10 yards before some brave fool chopped The Monster’s legs out from under him. The Monster immediately popped up, saw how far he’d gone, and then beat on his chest and howled up at the stars. It was super. When he figures out how strong he actually is, he’s going to be all sorts of trouble on the field.

The Most Profound Moment of the Season

Our second game was played in the rain, which is my second-favorite type of weather for football games. (My first favorite: anything else. Literally anything else.) We were playing School W, a team we knew enough about to be intimidated by, but not enough about to prepare a team-specific game plan for. The legitimacy of our worries was confirmed quickly.

It took them exactly 11 seconds to score their first touchdown. One minute and 25 seconds later, they were celebrating their second. They were strong, they were smart, and they had a kid who was faster than fast. For, like, three quarters, I was convinced he was actually just a Suzuki Hayabusa they’d laid a jersey over the top of.

A handful of moments after School W had scored its second touchdown, the rain momentarily stopped. The sun slid out from behind the clouds to see if we were winning or not. And it was perfectly peaceful. One of our offensive linemen wandered over.

“Coach,” he said. “Look.” His eyes were aimed at the sky behind the empty bleachers in back of us.

“What’s up, Salinas?” I asked, without turning away from the game.

I could hear his smile. I stopped watching the game, and I looked at him. His eyes seemed so pleased. I turned around and looked at the sky. There was a rainbow.

“Maybe it’s a sign from God? Maybe it’s a miracle. We’re gonna win this game, and it’s gonna be a miracle.” He was completely serious.

We lost 18-6. I felt bad for the boys because they’re sweet kids and losses affect their whole existence. But I felt the worst for Salinas because he learned that day that there’s no such thing as miracles.

NBA After Dark Podcast: Celebrating Boogie and the Kings, Worrying About the Cavs