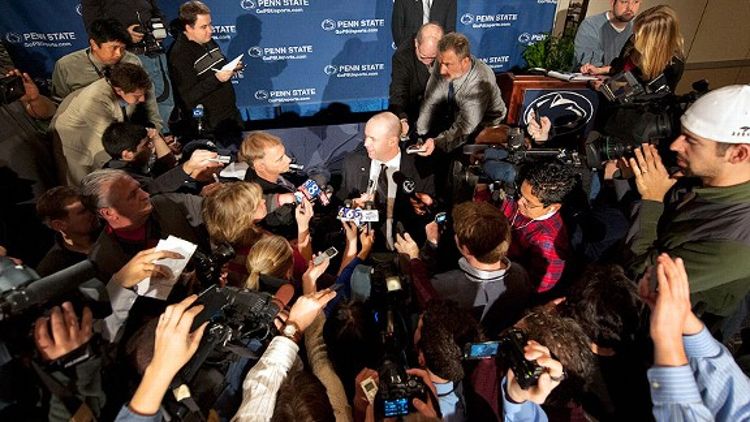 Not long after Joe Paterno became the head coach at Penn State, he received a letter from an alumnus, a doctor in the small town of East Stroudsburg. The Nittany Lions had struggled to win their season opener over Maryland, and Paterno felt burdened by the legacy of his predecessor, Rip Engle, who guided Penn State to Eastern football prominence over the previous decade and a half. “If this is the kind of football I have to watch at Penn State for the next twenty years,” the doctor wrote, “I want you to know I am going to start a campaign among alumni to bring in a Penn Stater to set football right with our university.”

This, of course, was 1966, a time when people still wrote poison-pen letters rather than spouting off in troglodytic social-media posts; still, the doctor’s criticism made little logical sense, since Paterno, a Brown graduate, had spent the previous 16 years in State College as Engle’s assistant coach. (It’s kind of heartening to note that this sort of knee-jerk petulance is not just a product of modern media; it actually predates Joe Paterno.) And yet it makes perfect emotional sense: There’s a deep-rooted sense of ownership among college alumni bases, an almost familial attachment to their respective schools. It is a unique dynamic that doesn’t exist in any American professional sport, and it is both wonderful and terrible. It explains why a college football stadium, filled to capacity, is the greatest venue in this country, and it explains why people pay for the privilege to lose their minds on subscription-only message boards that often focus on the college choices of speedy teenagers, and it explains why the majority of the Penn State community spent the weekend losing their collective mind over the hiring of the coach of one of the best offenses in the National Football League.

Last Thursday evening, upon learning that Patriots offensive coordinator Bill O’Brien had been brought on as Penn State’s new football coach, a frenzy of angst ensued. On the message boards: disbelief, declarations of war, people attempting to start petitions to convince O’Brien not to take the job. Penn State had taken 58 days to search for a coach, and in doing so, unwittingly built the sort of expectations that befell the creators of Lost: If there wasn’t something transcendent awaiting behind that curtain, a Nick Saban or a Les Miles or a Jon Gruden gushing about This guy and That guy, then what was the point? At the very least, people wondered, why not hire one of our own, and not some stranger who went to … Brown?

And so that same night, several former players, including LaVar Arrington, mouthed off to Nate Bauer of Blue-White Illustrated about the school’s refusal to consult them on the hire. “I will put my Alamo Bowl MVP trophy in storage,” Arrington said at one point, which I’m sure raises two questions among those of you who could not care less about my alma mater: Where does LaVar Arrington keep his Alamo Bowl MVP trophy right now, and what exactly are these Penn State people clinging to?

I mean, I get it. Of course I do. I went to Penn State; I grew up in State College. I never played football, and yet this whole saga has felt more inherently personal to me than anything that’s taken place in my adult life, other than my own wedding. Nothing like this has happened in sports before, anywhere, and hopefully it never will again. I’ve questioned everything I’ve said and written, and others have said and written, a hundred times over. I get that for people like Arrington, the potential banishment of acting coach Tom Bradley, an extremely well-liked guy who (as far as we know) had no knowledge or complicity in Jerry Sandusky’s allegedly heinous acts, is an affront to his own identity as a former Penn State All-American. At some level, it isn’t fair, but there’s nothing about this situation that’s fair, most notably the fact that children may have been harmed owing to the incompetence of their elders.

The school’s new president, Rodney Erickson, has tried to reach out to both students and alumni, but the situation in State College remains fraught. (My parents and I have known the Erickson family for 30 years, and so I have no objective viewpoint on his tenure so far. Everything about this story is so incredibly fraught with complications for those of us with ties to the place.) The people who live there feel as if they’ve been branded by the actions of a few. A vocal segment of the alumni base feels that Paterno was somehow dismissed unfairly. (I disagree, since Paterno set an incredibly high standard for himself, and at the very least failed to live up to it.) And a vocal segment of the alumni base feels that Paterno’s legacy was shunted too quickly. (I get where this comes from, since we have yet to hear the coach’s testimony, though the vocal minority who seem more focused on rescuing Paterno’s legacy than on seeking the truth disturb the hell out of me. Hopefully, Paterno will be healthy enough to testify in person.) You may not understand any of that, but this is the reality. Penn State is in limbo: The past couple of months are part of history now, and college football programs feed off of their history, for recruiting and donations and season-ticket sales, but what happens when nobody knows how to regard that history anymore? Pride and shame, shaken into an indigestible cocktail. There is a sense of fury when the university tries to break from its past, a sense, among many alums, that this school they feel so deeply about has somehow betrayed them.

And yet: How does it look when a community complains about a hasty and judgmental media inquiring about serious crimes, and then immediately passes judgment about the head coach hired to clean up the mess because he doesn’t fit their template? You may argue that Penn State’s search committee, comprised of (among others) a trustee and an acting athletic director and a women’s volleyball coach, was overmatched and botched the details and should have gone after (INSERT PROMINENT NAME HERE), but do you want to know why a number of qualified candidates and big names seem to have passed up the opportunity to take this job? It’s because what happened at Penn State is an ethical and emotional puzzle so daunting and infuriating and perplexing that even men as ego-driven as football coaches can’t get their heads around it. It’s because the problems at Penn State aren’t about football at all.

I have absolutely no idea if Bill O’Brien will succeed or fail; in his introductory press conference on Saturday, he read a letter he’d written to football alumni, and announced he was retaining at least one assistant from Joe Paterno’s staff, and also paid tribute to Paterno himself. It was an impressive showing, and it seemed to assuage some people, though there is still overwhelming skepticism. Even before the Sandusky scandal, the task of following the winningest coach in major college football history was a daunting proposition; now it is difficult to imagine a scenario where O’Brien doesn’t suffer through two to three years of missteps and failures and Sandusky-driven repercussions before he can begin to build anything. He has to win over a provincial fan base and build a recruiting pipeline and convey rationality in the midst of a completely irrational situation. Frankly, I don’t know if there’s any football coach in America who possesses all the necessary qualities to do all of those things.

It was always going to be a long road for Penn State, post-Paterno; his is the kind of coaching tenure that no longer exists in the modern world. It’s been 25 years since the Nittany Lions played for a national championship, but the ethical perception of his program as something humble and pure sustained him even in the lean years. Now that perception is gone, and perhaps the only way to set things right, at least for the near future, is to put all that history into storage and start anew.

Previously by Michael Weinreb:
Sugar Bowl Revisited: Basking in the Big Ten’s Faux Success
R.I.P.: How to Make it in America
Which Minor Bowl Game Are You Most Excited About? (And Other College Football Questions)