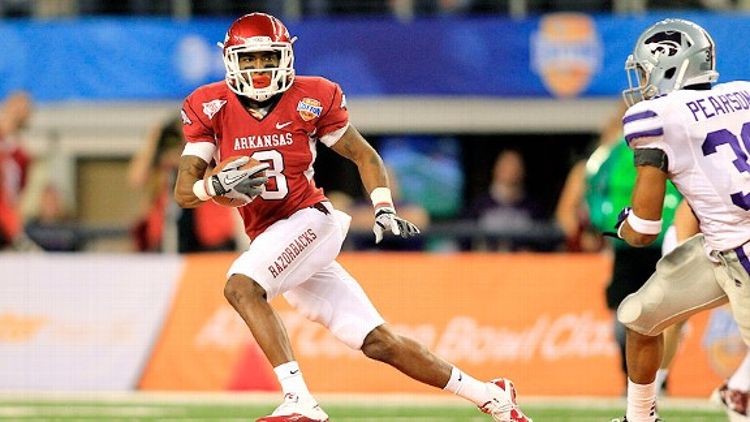 I’ll be honest: when Collin Klein got the ball with three minutes left, down 13 in Friday night’s Cotton Bowl, I thought I was going to see some magic. And why shouldn’t I have? The whole bowl season — from Louisiana-Lafayette’s last-minute victory over San Diego State all the way to the present — has been the kind of show-stopping, breathtaking run of absurdity that justifies the entire system. And this was the Cotton Bowl, the non-BCS BCS game, played in what appears to be the largest Buffalo Wild Wings in all of North America.

And this is Collin Klein we’re talking about. The Honey Badger. That’s right, they call him that, too. (“They” being people from Manhattan, Kansas.) Klein was a darkhorse Heisman hopeful at one point this season precisely because of his ability to engineer late victories. This is a quarterback who rushed — rushed — for five touchdowns in one game, and he was going up against a defense so porous that head coach Bobby Petrino didn’t bother waiting until after the bowl game to replace their coordinator. If LSU and Alabama could put up 41 and 38 points, respectively, on the Hogs, then surely Collin Klein could manage a little more of that late-night Manhattan magic.

But it didn’t happen. Instead, Klein was sacked twice on the game’s final drive before Arkansas’ Jerico Nelson turned out the lights with an easy pick.

The last time the Hogs stepped onto a football field — way back when we were all pepper-spraying one another for Xboxes — they were ranked third in the country, the tail end of an all-SEC triumvirate atop the polls that had to have been deeply annoying to anyone west of Little Rock or north of Lexington. They finish the season 11-2, the two losses, they will quickly remind you, coming to the two teams playing in tonight’s BCS National Championship Game. They lost those two games by a combined total of 48 points, though (split evenly between LSU and Alabama, as is appropriate), and came within a hog’s whisker of losing to an Ole Miss team that ranks among the worst in conference history.

The rightly-exalted Tyler Wilson had trouble getting the passing game going against the K-State secondary, who were, for much of the game, the only BCS-level unit on the Arlington turf. Wilson finished with only 216 yards passing, his third-lowest total on the year behind — well, you can probably guess the other two teams that grounded the Arkansas air raid. The score doesn’t bear it out, but Arkansas was one Joe Adams punt return away from nearly losing its second-straight Cotton Bowl appearance.

Arkansas’ 11-2 record is nothing to be ashamed of, of course, and their defense deserves major credit for keeping Klein from taking over. The Hogs will likely finish in the top five, and if this year’s preseason Heisman candidate Knile Davis foregoes April’s draft, they should enter 2012 in the same position. But you have to wonder how much of the Hog hype has to do with their being the fulcrum of an extremely top-heavy division.

Sure, they were beating Texas A&M in the second half before it was cool, and they passed their only other real challenge this year by beating South Carolina in Fayetteville, but their place in the middle of an extremely unbalanced division makes it difficult to tell whether the Hogs are an elite squad on the make, or merely a very good team with geography on their side.

In that way, LSU and Alabama (as well as Oklahoma State and Oklahoma) were just as responsible for the hype surrounding the Cotton Bowl as the two teams involved.

Early on, when Arkansas and K-State were still attempting to outsmart one another by deploying the least-effective aspects of their offenses, Gus Johnson tried to sell the game’s low yardage as evidence of an LSU-Alabama-style defensive slugfest. In reality, though, K-State’s receivers couldn’t catch and Arkansas refused to pass.

“These are two BCS-caliber teams!” we’d all been trying to say. It wasn’t until Wilson finally found Jarius Wright for a 45-yard touchdown late in the second quarter that either team seemed willing to agree, if even momentarily. K-State managed a touchdown on either side of halftime, and Arkansas’ Broderick Green and Dennis Johnson managed to move the ball on the ground for the Hogs, but with neither offense able to consistently click at their usually prodigious level, the game had all the electricity of a junkyard battery.

So I’ll be more honest with you. Even when it looked for a moment like Klein might do his typical osmosis-through-the-defense thing in the game’s final drive, and even with the glow of that TV screen the size of Times Square haloing his helmet, I wasn’t remotely surprised that it didn’t happen. Friday night, neither team seemed up for that kind of magic.