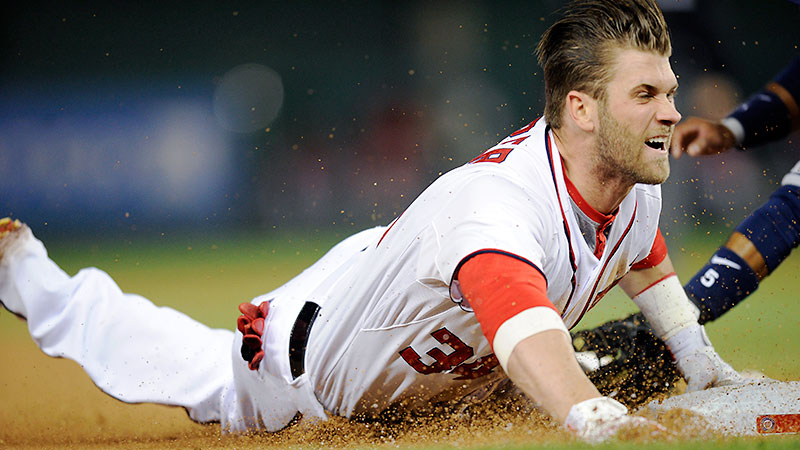 The only bad thing about Mike Trout is that his greatness prevents us from truly appreciating Bryce Harper, who’s one of the most talented baseball players in the world. Rare left-handed power is Harper’s party piece, but he combines it with a strong throwing arm, good defense, and staggering athleticism.

Harper put some of those skills to use on Friday, hitting a bases-clearing triple in Washington’s 11-1 win over San Diego. Unfortunately, he tore a ligament in his left thumb on the slide, and while fans of Harper, the Nationals, and baseball in general hoped his DL stint would be brief, news broke Monday that Harper needs surgery and will be out until at least July.

And that sucks, plain and simple.

It sucks that we won’t see Harper belting balls into the upper deck, or dashing around the bases like he’s doing a screen test for a slasher film, or fielding a ground ball through the hole and coming up ready to throw, asking the runner on third base if he feels lucky. I’m disappointed because I saw big things coming for Harper and his Nationals this year: an MVP and a World Series. And while the latter could still happen, Harper’s breakout year will have to wait.

It’s OK to be bummed out. I am. It’s less OK, however, to search for someone to blame or to despair over Harper’s career.

You’ll want to blame Harper for diving carelessly in a blowout, but some players pace themselves naturally, while others play at the red line all the time. Harper’s in the second camp, and what’s more, we probably wouldn’t enjoy him as much if he were different. You could blame him for sliding headfirst, but hundreds of people do that every day on fields across North America without hurting themselves, and the only thing that separated Harper was some bad luck on Friday. You might want to blame Nats manager Matt Williams, as if his recent decision to bench Harper for lack of hustle — which is like benching Kobe Bryant for not shooting enough — led Washington’s best player to this fate. And listen, I understand. I find Williams, a month into his first year on the job, guilty of countless acts of managerial malpractice. But he didn’t make this happen.

You might be tempted to break out the sackcloth and ashes for Harper’s talent, wasted by injuries. Between this and the time Harper ran into a wall as hard as one can in sports without a car getting loose at Talladega, you might start worrying about a recurring pattern. Is Harper like Josh Hamilton, possessed of indescribable talent but unable to stay on the field?

I wouldn’t write him off just yet.

Thanks to Harper’s record of success and impressive facial hair, we forget that he’s still only 21 years old, an age at which most human baseball players are usually still in college or A-ball. Harper’s already a two-time All-Star with 43 career home runs. He’s younger than MLB phenoms Xander Bogaerts and Christian Yelich, younger than top outfield prospect Oscar Taveras, younger than 2013 no. 1 overall draft pick Mark Appel, and younger by three years than Houston Astros wunderkind George Springer. We’re going to lose a few months of Harper, but there’s still a very long road ahead, and that road still leads to greatness.

I’m not old or bitter enough to start blaming the Culture of Instant Gratification for these reactions, but let’s not shit ourselves. Whether you search for meaning in Harper’s injury is either a matter of metaphysical standing or a matter of just not being able to find anything better to talk about. Things like this happen all the time; it’s an operational hazard when something as big as Harper moves that quickly toward a stationary object. Harper’s injury is not an indictment of the hustle culture or Harper’s manager or Harper’s sliding technique. It was an accident. Maybe it was preventable, and maybe it wasn’t. But if you think that whatever driving force of the universe you believe in communicates by tearing ligaments in Bryce Harper’s hands, please tell that force to invest in a PR firm capable of clearer messaging.

The only lessons to take away from this experience are that baseball can be dangerous sometimes and that the sport is less fun when Harper’s hand is in a splint. He’ll come back in a few weeks and resume his campaign against the National League’s pitchers. Nobody is to blame in the meantime, and nobody needs to worry.

The Silver Lining of a First-Round NBA Playoffs Exit