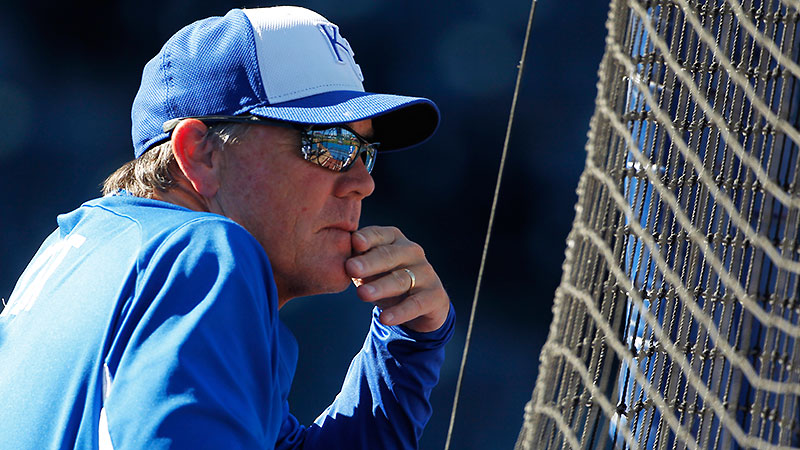 One of the few things I envy about the United Kingdom is that in any given season, sports fans there can bet on which Premier League manager will be fired. In fact, it seems people can bet on anything sports-related in the U.K., because British sports culture is like the seedier parts of Marrakech in the second act of an Indiana Jones movie.

The race to the first managerial firing — or the “Sack Race,” as those charmingly pun-happy Brits call it — is something of an annual tradition over there. This week, Manchester United canned manager David Moyes amid a season that resembles a date I went on in high school: disastrous, embarrassing, unsalvageable, and at the intersection of not actually lasting that long and feeling like it took an eternity.

Our sports culture may not include betting on which MLB managers are primed to lose their jobs, but we do like to talk about which managers are on the hot seat (or, as Baseball Prospectus’s Ben Lindbergh and Sam Miller have started calling it, “the wobbly chair”). So, whose chair is the wobbliest at the moment, and who’s likely to be fired first? Inspired by the Moyes news, here are my odds.

There are far worse teams in Yost’s own division, but that’s actually why Yost is the most likely to lose his job midseason. The Royals are expected to contend, so if they fall too far behind the division-leading Tigers, Kansas City GM Dayton Moore could decide the volcano requires a virgin. It was supposed to be KC’s time two seasons ago, and Moore, who has been embattled for most of his tenure, could easily make a panic firing this summer if the team’s interminable playoff drought seems likely to continue. Plus, it’s not like Yost has a track record of success or a reputation for being a conspicuously good manager anyway.

He would’ve been out two years ago if not for (1) the lingering afterglow of a World Series title he won when Albert Pujols was the same age Mike Trout is now and (2) an insane contract that runs through 2018 and pays him $6 million in each of the last three years of the deal. Most MLB managers operate on short-term deals, so signing a skipper to a 10-year, $50 million contract is about 20 or 30 times more ludicrous than the contracts the Angels gave Pujols and Josh Hamilton.

It’s uncommon to see a manager in any North American sport get kicked to the curb after less than a full season, but expectations couldn’t be higher for the Washington Nationals, and their first-year manager has already caused a stir. Over the weekend, Williams pulled Bryce Harper — his best player and a guy who once tried to run through a wall because he plays so hard — from a game for not hustling. That’s the kind of thing you’d expect from a Kirk Gibson protégé, and the kind of conspicuous display of power you’ll see from a boss who feels like he needs to command the respect of his subordinates. After following the more laid-back Davey Johnson to the franchise’s greatest success, it’s entirely possible the Nationals might not take as well to Williams, in which case it’d be easier for GM Mike Rizzo to cut ties with his manager than with his star.

While only a poor carpenter blames his tools, Gardenhire’s been given a Fisher-Price hammer and told to go build a house. That said, Gardenhire has taken that hammer and thrown it in the woods while wandering aimlessly around the property, occasionally setting fire to his stack of pressure-treated lumber.

Gardenhire is the second-longest-tenured manager in MLB, and he works for an organization so loyal to its coaches and front-office staff that it walks the line between “insular” and “parody of good-natured Midwesternness.” Nevertheless, Gardy lost 291 games from 2011 to 2013, and roster of flotsam or not, that’s a tough record for a manager to survive. Minnesota’s low expectations for this year make him relatively safe for this season, but I doubt he stays with the Twins much longer.

There isn’t a worse tactician running a team in the whole of North American sports. Wash makes Vinny Del Negro look like Bill Belichick. If he’d coached the 1927 Yankees, Wash would have bunted in the first inning down five runs with Babe Ruth on first and Lou Gehrig up. His tactics are anathema to the extremely smart roster construction GM Jon Daniels has undertaken.

But management isn’t entirely about tactics, and the Rangers love playing for Wash. Daniels seems to like him, too, as do the local media. From the GM’s perspective, if Washington’s ability to bring out the best in his players outweighs the runs he gives up by hitting Elvis Andrus at the top of the order, that’s a net positive. And nobody seems particularly inclined to force Daniels to make a change.

That said, the Rangers have high expectations, and until Jurickson Profar, Matt Harrison, and Derek Holland return from their injuries, the team is in a perilous position in a tough division. That I feel good about Wash’s chances of surviving this first half speaks volumes about the force of his personality.

His team’s play coupled with his often needlessly aggressive and controversial behavior might get Gibson fired in a normal franchise, but those behaviors are entirely in line with the attitude shown not only by GM Kevin Towers, but also Diamondbacks owner Ken Kendrick, both of whom seem prepared to die on the cross of grit and throwing at batters. I’m having a hard time imagining Towers firing Gibson this season.

Porter might be the major league manager in greatest need of a hug, but his chair is not wobbly in the least. In the past week, Porter stared into space for 17 seconds while searching for the words to describe his feelings about a Matt Dominguez TOOTBLAN, and Porter might still be ruminating if he hadn’t been snapped out of his trance. Then, over the weekend, he threw a nutty when Oakland’s Jed Lowrie attempted to bunt around a defensive shift up seven runs in the first inning.

It’s rough. Losing that badly will take its toll, but Astros GM Jeff Luhnow hired Porter to oversee a rebuild, and it’d be pretty awful of Luhnow to put Porter through the wringer he’s been through the past year, and then not at least give him first crack at winning with the Springer/Appel/Correa core that’s already starting to appear in the majors. Barring a series of histrionic episodes, I can’t imagine Porter being the first manager to lose his job.